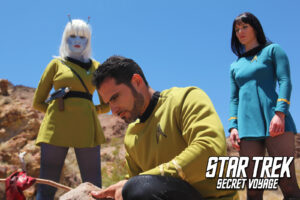 This was still four years prior to the publication of the fan film guidelines by CBS, and it was a time when the Star Trek rights holder really had no idea what to do about fan films other than to look the other way, pretend they didn’t exist, and hope that they and all of their legal and licensing ambiguities would someday just fade out of existence.

Creation, as a licensee, was not allowed to provide table space to anyone selling bootlegged Star Trek merchandise or connected in any way to someone promoting anything Trek-related that was unlicensed. At the time, that included fan films. At best, Trek fan films could “sneak in the side door” at licensed cons by unofficially teaming up with acceptable dealers/vendors. For example, SCOTT NAKADA had made props for STAR TREK: RENEGADES, so his prop-making dealer table could promote that fan film.

But to have a table devoted SOLELY to an unlicensed Star Trek fan film at a licensed Star Trek convention (which Creation still was at that point)—that was unheard of! And yet, in 2012, the unreleased STAR TREK: SECRET VOYAGE would do just that, as you can see from this photo from the con… 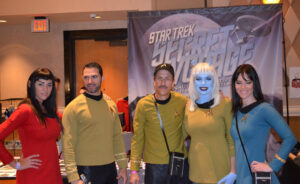 Secret Voyage would premiere its first episode, the 39-minute “Whose Birth These Triumphs Are,” on YouTube shortly after the convention, although that release was later taken down and replaced in October of 2012 with another version having improved sound. Two years after that, Secret Voyage continued with a new second episode, the 35-minute “Rise of the Gongdea.” But since 2014, no additional episodes have been released.

Secret Voyage was a unique Trek fan film, featuring the U.S.S. Enterprise NCC-1701 from TOS but with an entirely different crew on a secret mission. Shot primarily in a desert area in southern Nevada, the cast and crew featured a mix of trained professionals, semi-professionals, and just plain old Trek fans. Considering the amount of footage and variety of camera angles, it was a very ambitious production. Have a look at the two releases…

During the late summer of 2016, shortly after the released of the guidelines, I interviewed Secret Voyage show-runner CRAIG SHEELER via a recorded phone call. We spoke for nearly three full hours! Back in those early days of this blog, I hadn’t yet started featuring audio interviews (those would debut the following year), and I would usually transcribe those phone conversations into text interview blogs.

The problem with this particular interview, however, was that Craig was just so darn interesting and had so many great stories that a text interview would easily have turned into a five or six-part blog!

On the other hand, a 3-hour audio interview was kinda ridiculous, too, and a good portion of it was chatty banter about our careers, other fan films and filmmakers, the new guidelines, complaints about hyper-critical fans, kvetching about the Axanar lawsuit, and all sorts of stuff unrelated to Secret Voyage. Not only that, but I was reading questions off of a sheet rather that just interviewing Craig conversationally (something that I eventually started doing when I began publishing blogs with audio interviews).

In other words, it wasn’t as simple as just cutting out all the chit-chat and leaving in the rest. So I just kinda kept it on the back-burner. But as the years went on and this important fan film continued to sit in blog limbo, I felt ever-increasing pressure (well, more accurately, it was straight-on guilt) to find a way to salvage what was, all things considered, a really great interview.

So a few months ago, I decided to finally tackle the challenge. I began to do major “surgery” on the audio interview, trying to turn it into something with a run-time of 60-90 minutes and a smooth progression of topics—rather than jumping around randomly, as our initial interview did. I cut out a LOT of extraneous stuff, changed the order of certain answers, and re-recorded many of my questions to sound less like I was just reading from a numbered list.

The result of these many hours of work over several weeks appears below. Take a listen and see if you can tell where I edited, re-recorded, and inserted. You’ll probably notice a few spots, but I bet you won’t find everything…!