Fan Film Friday – Save THE EXPANSE by NOT binge-watching it! 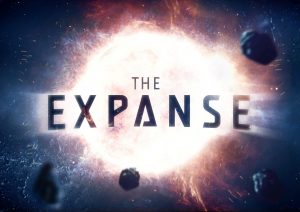 I admit it: I got THE EXPANSE canceled by Syfy.

I didn’t mean to.  It’s just that I’ve fallen so far behind in my TV watching that I’m still on stuff that first aired back in April!  I’ve been collecting the season 3 episodes The Expanse on my DVR to binge-watch over the summer at some point when I have more time…something I did for the previous two seasons, as well.

And that’a why the series just got canceled!

The Expanse, based one the Hugo Award-winning book series by the same name, debuts new episodes each Wednesday night at 9pm (8pm Central) on the Syfy Network.  While the series is more complex than most other sci-fi series out there—it’s been called “Game of Thrones in space” (which is pretty spot on)—it’s amazingly well-produced with great acting and awesome visual FX that show outer space and zero-G physics incredibly accurately.

It’s rated 100% fresh on Rotten Tomatoes, and those fans who, like me, have stuck with the show consider it to be one of the finest television space sci-fi series on the air.

That’s why we were dumbfounded last week when Syfy announced that this critically-acclaimed, fan-favorite series would be canceled after its third season.  Supporters immediately mobilized, starting an online petition (which already has over 110,000 signatures), creating a website and #SaveTheExpanse, and posting this very well-edited video reminding fans why The Expanse is so good and worth saving…

By this past Tuesday, thousands of fans had raised enough money on GoFundMe to hire a plane to fly a banner over the Santa Monica, CA offices of Amazon Studios trying to convince Jeff Bezos to pick up the series on Amazon Prime…

There’s also been a concerted letter-writing campaign to Netflix executives trying to convince them to pick up the beloved space science fiction series.

With time running out and the Toronto-based Expanse sets already being taken down (some possibly being purchased by Star Trek: Discovery), fans have been working overtime in a valiant attempt at a last-minute rescue of the series.

And then this video got posted…

CAS ANVAR, who plays Alex Kamal on The Expanse and played the Romulan character Sentek in the final two episodes of STAR TREK CONTINUES (see…there’s the fan film connection!), said that there’s still a chance to change Syfy’s decision—which is, after all, a business decision: make The Expanse more profitable for them.

Well, the first way is to increase the ratings!  TV ratings are measured 1) on first viewing live when a new episode airs (in this case on Wednesday nights), and 2) over the course of the next three days as DVR recordings are viewed.  After that, it doesn’t matter when you watch it because Syfy is no longer paying attention or measuring anything for that episode.

So if you want to #SaveTheExpanse, do NOT wait to binge-watch it over the summer!!!  Watch it on Wednesday nights or on Thursday, Friday, or Saturday.  That’s what I’ll be doing for the next seven weeks while the show airs its final 7 episodes.

Second, for those people outside the U.S. and Canada, the show is available for purchase on iTunes and AmazonPrime for $2.99 per episode.  Do you have a friend overseas who hasn’t seen the show yet?  Gift them one or two of the first few episodes to try out.  (It’s cheaper than hiring a plane to fly a banner!)

And finally, the more that an episode gets watched, the more it counts.  If you record and watch it live on Wednesday and then watch it again on Friday, that’s TWO watches, and that adds to the ratings.  So even if you aren’t in the room or in the house, leave the TV and DVR on and…

Going out to dinner or to the store?  Leave your DVR playing the latest episode of The Expanse…it’ll be even better because the commercials will all play and Syfy will love that!  Do you ever fall asleep with the TV on?  Let it play The Expanse while you gently slumber and dream of Earth and Mars going to war while the Belters take sides.

We’ve got less than two months left to save this series, folks!  We didn’t save Star Trek when Enterprise was canceled back in 2005.  But this time we might just have a chance.  Spread the word.  Even if your friends don’t watch the series, just ask them to record it and let it play while they go out to work or to the gym or to McDonalds or Starbucks or wherever.  It’s not a lifelong commitment, people.  By the end of June, the game is over…one way or the other.

So let’s go down fighting…or if we’re successful, maybe go UP fighting!!!