With titles like RED SHIRT, RED SHIRTS: A STAR TREK PARODY SERIES, and THE RED SHIRT DIARIES (to name but a few), fan filmmakers have been hilariously spotlighting these poor bastards—I mean, noble heroes—for nearly a decade.

One of the very first parody fan films of this sub-genre of a sub-genre of a sub-genre was posted to YouTube back in 2013—the brainchild of two show-runners who, at the time, were both studying Multimedia at California State University Northridge. ANTOINE BANDELE and his friend RICARDO ELLIOTT II decided in early 2013 to start up a YouTube channel called “Akimbros”—a hybrid of the word “akimbo” (when you stand with your hands on your hips) and “bros.” 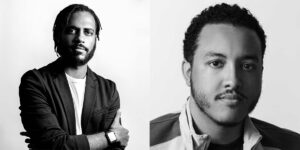 At the time (and even now) African-American showrunners on Star Trek fan films were a rarity. So despite its light-hearted nature and the fact that this was the only Star Trek fan film that the Akimbros would ever release, RED SHIRTS still holds an important place in fan film history.

Antoine and Ricardo initially set out to release one new film every two weeks on their Akimbros channel, and Red Shirts was their first offering. It debuted on May 17, 2013. Their second release, an epic light saber battle on the roof of a garage next to the 405 Freeway in West Los Angeles, followed just over two weeks later. However, their third film, an action short titled Tower 46, took another six weeks to post, and their fourth release, an ultra-short but ultra-clever “real life” video game between Pirates and Ninjas, wouldn’t see release for another six months. Their final offering, a brief teaser-trailer for an Oblivion fan film, came out a year later…and then that was that for the Akimbros.

Despite its slapstick comedy tone and store-bought J.J. Trek Halloween costume tunics, Red Shirts is actually an amazingly ambitious fan film…made even more so by the speed of production.

Antoine and Ricardo came up with the story idea together, and Antoine wrote the actual script. Antoine had loved writing ever since he was a kid in elementary school, creating stories about Kung Fu fighting teenagers who were stuck in their own dreams and fan fiction covering his favorite franchises. Even today, Antoine is still writing—he’s released a number of books, novels, and novellas for adults, young adults, and children. You can check them out here.

Once the script was completed, the Akimbros needed an outdoor location to shoot their film. The obvious choice, for two college students living north of Los Angeles, was to travel out to Vasquez Rocks, the iconic filming location of countless Star Trek episodes and movies…including Kirk’s epic hand-to-hand battle with the Gorn. 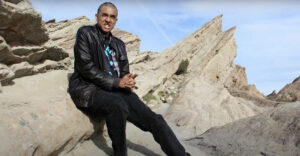 Unfortunately, Vasquez Rocks Natural Area Park charges filmmakers a fee to shoot there. And even though they offered Antoine and Ricardo a discounted student rate of only $40/hour (professional rates can run significantly more), they expected that the shoot would last long enough to take that cost well into the many hundreds of dollars, money they didn’t have back then for a fledgeling YouTube channel.

Instead, the Akimbros opted for another iconic filming location from Star Trek‘s long history: Bronson Canyon, located in the hills under the famous Hollywood sign. Episodes including TOS’ “Bread and Circuses,” TNG‘s “Darmok” and “Homeward,” Voyager‘s “The 37’s,” and Star Trek VI: The Undiscovered Country all used either the outdoor areas of the canyon itself or the famous Bronson Caves, which also served as the exit from the Batcave in the live action 1960s Batman TV series. 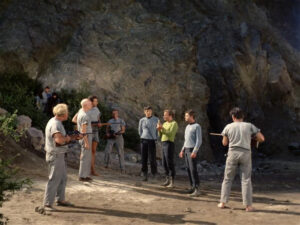 Bronson Canyon in the TOS episode “Bread and Circuses”

While large productions do require filming permits to shoot at Bronson, students and amateur filmmakers usually don’t bother, and unlike Vasquez Rocks, there are no rangers or visitor center to monitor activity there. So Antoine and Ricardo gathered a group of friends and local L.A. actors and acting students and started preparing for their shoot.

Some fan filmmakers go out to a location with their team and camera equipment, take a look around, decide on some good spots, and then start shooting footage. This was not the case for Antoine and Ricardo, however. They went out to Bronson Canyon first on April 17, 2013, scouted the area, and did a read-through of the entire script. No costumes were worn and no cameras were rolling. Instead, they used this relaxed opportunity to rehearse a bit, get a feel for their characters, and block out shots (blocking means deciding in advance where to put and move the camera and the actors for each scene in the actual shoot). 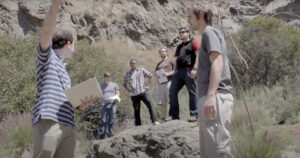 Two weeks later, on a Wednesday when that scenic location wasn’t filled with tourists and hikers, the group returned to the canyon and shot all of their raw footage in a single day of filming. That’s actually way more impressive than it sounds. In terms of camera angles, coverage, and most of all physicality, Red Shirts is a very ambitious project. There are close-ups, wide shots, pans, shaky cam, multiple scenes with actors running, fighting, falling, and doing swordplay. And they didn’t even have a full day to shoot because, being a canyon, the area doesn’t get sunlight for the full day. Shadows begin getting long in the mid-afternoon, screwing around with your light. So either shoot quick or risk having footage that doesn’t match.

With production wrapped, Antoine and Ricardo each got to work on what they did best. Antoine used Adobe Premiere Pro and had a rough cut assembled that very night. A few days later, the final cut was ready to be handed off to Ricardo for scoring music. Meanwhile, Antoine then transitioned to working on sound editing and mixing along with adding in the glow of the light saber, the phaser blasts, and the sparks. Antoine also digitally removed the boom mic from a couple of shots where it accidentally became visible. Ricardo did the rest of the visual effects, including the explosions, the transporter effect, and the opening title sequence.

A mere two and a half weeks after filming everything, the finished Red Shirts fan film premiered on YouTube. Since then, it’s gotten nearly 40K views. And even though the Akimbros have each gone on to other career endeavors, their five films, and especially their kick-off Star Trek fan film, still live on…which is more than one can say about those poor Red Shirts!