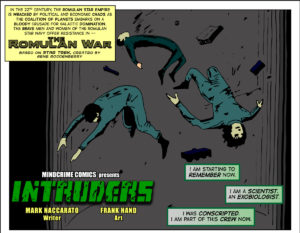 No sooner has the final page of my Axanar Universe comic book “Stardate 2245.1” come out than there’s a NEW fan film comic book in town! But this one isn’t Axanar. It’s the first comic book associated with the upcoming fan film THE ROMULAN WAR by show-runner MARK NACCARATO of Tennessee.

The Romulan War is the first Star Trek fan film since Prelude to Axanar to be presented in a “mockumentary” style to tell an epic tale from the point of view of interviews and “archival” footage. And The Romulan War has the potential to become just as epic as Axanar. Both tell the story of a significant war that helped to define the United Federation of Planets for decades and even centuries to come, and both fan projects take a look back at those seminal events from numerous perspectives. The trailers for The Romulan War—with visual FX by the “Sorcerer of CGI,” SAMUEL COCKINGS, and trained actors—look very exciting and are worth checking out (click here to view them).

An Indiegogo campaign last summer took in $13K for the project, and the finished fan film was supposed to be ready about now. However, an illness and passing of a close family member took precedence for Mark earlier this year, and things are still being worked on. Mark gave me a progress report:

Sam is wrapping up effects shots for Part 1, but we still have to lock in the score, there’s some 3D maps we are working on, and we’re re-tracking some audio. We also went back into the studio two weeks ago to shoot two NEW scenes that were added last-minute. I am hoping that we get it out by the end of August, but I continue to be plagued by delays that are not really under my control.

But while fans were waiting for this eagerly-anticipated production, Mark helped to quench our thirst by releasing five (so far) very well-crafted and dramatically intense “enhanced audio dramas” called WAR STORIES. Each of these short vignettes focuses on the logs of someone involved in the war (including me!!—I voiced Lt. Cmdr. Geoffrey Christopher who designed and tested the Warp 7 engine), presented as voice-overs but with graphical animations (hence, the “enhanced”). They are also REALLY worth checking out (click here to access them all).

Mark reports that two additional “enhanced” audio dramas will be released within the next month or two to help expand the epic of the upcoming 2-part fan film. One of the audio dramas was just recorded two weeks ago.

But Mark isn’t stopping there! This past week, he released the second comic book in The Romulan War universe—the four-page “Intruders”—written by Mark and illustrated by FRANK HAND. His first comic book, “Holocaust” (also written by Mark but illustrated by YUDHI SURYO and colored by ULUL AAZMI), came out the past April and focused on the MACOS. You can read it here. This latest release is told from the perspective of a Romulan…and not just any Romulan. Mark told me this…

If Ketius did not complete his mission, Starfleet would have found out what the Romulans look like. Ketius is, believe it or not, a pretty consequential character in TRW as he allows the secret of the Romulans’ appearance to stay secret a little longer.

Unlike my Axanar comic book—which I released one page per week for seven weeks, Mark has published all four pages of “Intruders” together, and you can read them below (click on any image to enlarge it)… 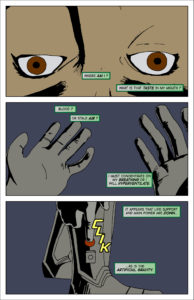 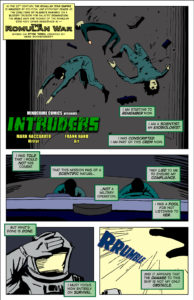 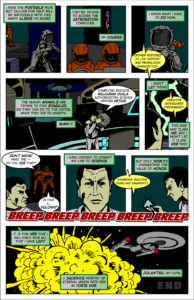