Two episodes back-to-back within a single month is pretty impressive. But it followed a drought of eight months without a single Starship Tristanepisode. In contrast, during the seven months prior to that, Tristan had released no less than FIVE episodes. I was curious how a team that was so prolific last year went through the first half of this year without a single episode completed. So I asked Potemkin Pictures show-runner RANDY LANDERS: why the sudden slowdown? Here’s what he said…

No slowdown as far as we’re concerned. Last year we may have cranked up production, but as stated, our goal is 12 productions per year. To date, we have released 2 Tristans, 2 Deimos and 1 Triton this year for a total of 5. We have 2 Tristans, 3 Deimos, 1 Kupok, and 1 Marie Curie slated for release between now and December 31st. That’s a total of 12, and we’re on a pace to accomplish that easily.

Certain projects have been affected by real life. One of our musical composers is stepping away to do some VFX work. One of our VFX artists’ partner was injured in an accident, and his project was quite understandably delayed by that. Stuff like that happens, and we move on and deal with it.

We do expect a slow start to next year, in fact. My wife has changed jobs, and we’re in the process of relocating to Lexington, Kentucky. I completed the deconstruction of our sets in Pelham, Alabama (Studio 3a, 3b and 3c were decommissioned at 17:11 Central Time on July 31), and we will be starting up in Lexington soon.

Wow, I had no idea these guys were moving! And Lexington, Kentucky is 430 miles from Pelham Alabama (you have to drive through all of Tennessee to get there…fortunately, it’s the short way through Tennessee, not the long way!). 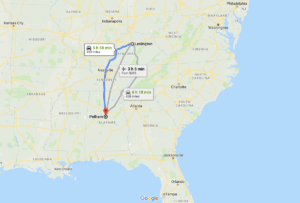 So the next question I asked was how this would affect the production. Most of the current cast members are local actors and fans based in Alabama. Are they gonna want to drive 12 hours round-trip just to make Star Trek fan films…?

Many of our cast members here have committed to filming our productions at our new studios. We’re taking our shuttlecoupe with us and expect our first production to feature three Deimos regulars using the shuttle. I expect that we will be recalculating the number of films for each production, but I’ll be reaching out to Star Trek fans and actors in Lexington and the surrounding areas soon, and we’ll see what we come up with. Plus, the Birmingham area cast members will have a couple of opportunities for additional stories to be shot back in Alabama.

So how will this affect the upcoming shooting schedule after the move?

The last time we moved—from Albany, Georgia to Pelham, Alabama— it took us about 6 months to get rolling with the filming. I expect the same this time. So after we relocate, we will lose two Tristan shoots, a Triton shoot, and a Marie Curie shoot. That will put us in a hole next year.

So when is this move happening? One would assume Randy will need enough space to set up a new studio…

My wife Linda started at her new job on August 13th. I’ve finished packing and expect to have the house empty by the 28th. Linda has been checking out potential locations in Lexington. We will be staying in an apartment for a month or two, before moving into our new abode.

We are using Zillow to search for available houses in the Lexington area, and once the old house is under contract, we will select from our short list and make an offer for the new house.

Of course, the requirement will include a suitable space to film. Once there, it’ll depend on the space as to how long it would take us to film. The big selling point of our old place is the boathouse where we filmed. It’s an amazing space for a workshop, and our realtor has already got several folks wanting to look at it.

Randy mentioned the full-scale shuttlecoupe he is building. As you can see from the photo below, it’s quite a large beast, and unfortunately, it doesn’t fly under its own power (at least, not yet)… 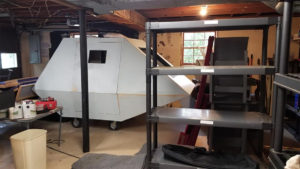 So how is Randy planning to get the thing moved safely across three states?

The movers wanted $4000 to move it, and I can buy a trailer for about a quarter of that.

Wouldn’t renting a U-Haul be even cheaper than that?

I measured both the truck and the trailers. The truck doesn’t have a tall enough opening, and then there are these huge wheel wells in the space. The trailer would work, but they won’t hook it up to my truck and won’t let the trailer leave the state. So I’ll go buy one and use it for the move. Then when I’m done, I’ll make a decision to sell or keep it.

And now, since you’ve been so patient, take a look at Parts One and Two of the latest fan film from Starship Tristan: “Repercussions”