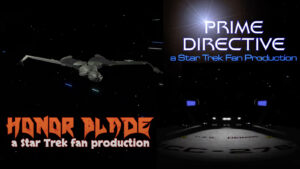 In Star Trek III: The Search for Spock, Admiral Kirk calls the U.S.S. Excelsior “The Great Experiment.” Well, Excelsior ain’t got nothing on POTEMKIN PICTURES as they launched their newest Creative group, KLINGON SCOUTSHIP QAB’ELTH, with an intriguing twist!

The debut episode from Qab’Elth was the 12-minute “HONOR BLADE,” featuring an all-Klingon crew on a newly constructed bird-of-prey bridge set built by Potemkin showrunner RANDY LANDERS and assorted yellow minions. Qab’Elth is the tenth fan series (or Creative Group making a series of fan films set on board a specific space vessel) to come out of this production studio (watch all of their many, many releases here), and the third to be based in Randy’s new home of Lexington, Kentucky. The other two are STARSHIP WEBSTER and STARSHIP CALIBORN, the latter having premiered this past June. But on July 23, it was time for Qab’elth, and here it is…

So what was “the great experiment,” then? What was the “twist”? On that exact same day, the latest release from the STARSHIP DEIMOS Creative Group was posted to YouTube. The 19th installment of Deimos, this 25-minute fan film was titled “PRIME DIRECTIVE” and seemed like a pretty typical episode…assuming you hadn’t already watched “Honor Blade.” But if you had, then about half of “Prime Directive” would have looked VERY familiar—almost déjà vu—because it was the EXACT SAME footage of the Klingons as was in “Honor Blade“! Take a look…

So now you can look at life from both sides now! It’s a fascinating experiment of telling the exact same parallel story in two simultaneously-released fan films…only from different perspectives. While Potemkin Pictures had previously done something similar when they took some of the footage from the Starship Tristan two-parter “RECLAMATION” to release the stand-alone fan film “FIREHAWK,” the latter was released more than two years after the former fan film. In the case of “Honor Blade” and “Prime Directive,” the two films were posted to YouTube on the same day.

Both scripts were written by VICTORIA AVALON, who plays Captain Gabriel of the Deimos. Meanwhile, RANDY LANDERS served as director and executive producer on each fan film, and it’s he who gets to answer my questions this time out…

JONATHAN – And here we are again, Randy!

RANDY – Here we are!

JONATHAN – So how did the Klingon Scoutship Qab’elth Creative Group and concept come to be?

RANDY – We have already encountered the I.K.S. Honor Blade (Qab’elth) in the 2019 Starship Deimos film “THE SOLOMON GAMBLE.” LARRY FLEMING played Captain Le-Kat, an honorable Klingon whose ship has interdicted a Federation merchant ship from smuggling weapons. A battle breaks out, and the Deimos fires upon the smuggler ship, which detonates because of the weapons cargo. Captain Gabriel’s action earned her the respect of Le-Kat.

So in the first draft for “Prime Directive,” we encounter the Qab’elth again. This was only a brief scene, and I asked Victoria Avalon (the script writer) to flesh it out so we could highlight the Klingons. We had received donations for new Klingon uniforms, including some impressive costumes from ERIC L. WATTS.

Just before the filming, I made the decision to assemble the Klingon scenes as their own film, just as we had done with the Firehawk footage from the Starship Tristan two-parter “Reclamation.” The Qab’elth scenes made for an excellent counterpoint film to the Deimos film.

JONATHAN – Now that you have a new band of Klingons, is BATTLECRUISER KUPOK now officially kaput?

RANDY – Heavens, no! You can expect its appearance (as well as Captain Kesh) in November’s release of the next PROJECT: POTEMKIN film.

JONATHAN – What were the biggest challenges in creating a Klingon-based crew?

RANDY – We had actors coming out of the woodwork. Larry was coming up from Atlanta, but the rest were from our Lexington casts and crews. The only challenge was getting everyone made up and in wardrobe. Both HILDA HELLACIOUS and SARAH HOLTON did a great job in helping get those two things done. Our Qab’elth group had a blast!

JONATHAN – Larry Fleming is traveling quite a long way to be a part of this! Is anyone else traveling as far, and is Larry committed to appearing in more episodes? 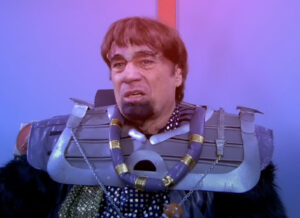 RANDY – Definitely, yes. We are blessed to have Larry coming up from Atlanta for Qab’elth. We are blessed with most of the Deimos cast coming up and over from Birmingham, Alabama, and Victoria Avalon comes way up from Tampa, Florida to portray Captain Gabriel.

JONATHAN – How many fan films will this Creative Group likely be producing in a given year?

RANDY – One or two at the most. It’s a lot of work with makeup and wardrobe.

JONATHAN – What led you to decide to present the story in the way you did (two fan films using essentially the same footage)?

JONATHAN – Why include all of the “Honor Blade” footage in “Prime Directive” but not vice-versa?

RANDY – I wanted to showcase the cast and characters of the Qab’elth. We’ve been doing a Klingon production since Project: Potemkin‘s “third season.” I’m hoping that will continue to be the case.

JONATHAN – Are you happy with the way both films turned out, or are there things you’ll be adjusting going forward?

RANDY – I’m quite happy with how things turned out. We have two solid productions, one from the Federation point of view, and the other from the Klingons’.

JONATHAN – And, as usual, I’ll finish by asking what new Potemkin Pictures fan films are approaching on short and long range sensors?

JONATHAN – Lots to look forward to!