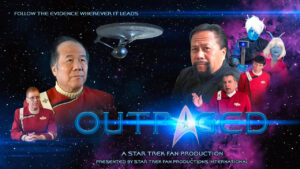 DAVID CHENG and his gang of cosplayers at Star Trek Fan Productions International are upping their game with each new fan film that they produce…and there’s been quite a few in the past two years—six, in fact! Their first, THE HUMAN ADVENTURE, was a very rare Star Trek: The Motion Picture era fan film, shot and released in late 2019. That was half a year BEFORE the world shut down due to a once-in-a-century pandemic. The global quarantine didn’t stop David and his team, but it did force them to start being creative. And thus was born one of the many examples of what I went on to dub the “fandemic” film, where each of the actors is filmed separately and individually, and these self-contained pieces of footage are then edited together to create scenes with conversations and story…a new kind of Star Trek fan film.

(Actually, there was nothing really “new” about it. VANCE MAJOR had been doing similar editing together of footage shot in various people’s homes for years in his many, many MINARD and CONSTAR fan films.)

Beginning in June 2020 with LOOK FORWARD TO THE DAY, David and co-showrunner MIKE LONGO (who played Jim Kirk) began releasing fandemic films where one character appeared in the screen at a time, first simply seated in front of backgrounds in their houses, sometimes with props visible… 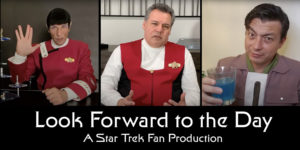 A few weeks later, JENS DOMBEK, known internationally as “The German Spock,” released a very stylized vignette titled I AM SPOCK, shot against a stark black canvas background with only himself (dressed as Spock) and a series Vulcan props , accompanied by a monotonal voice-over and haunting minialist music track. 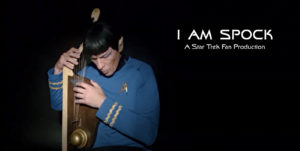 By October 2020, the bar was lifted slightly when, for the first time, their newest release worked in chroma-keyed virtual backgrounds against cosplayers who had shot their footage in front of green screen. UNREST also featured a few VFX shots of the U.S.S. Excelsior (under Captain Sulu) and the U.S.S. Enterprise-A (under Kirk, of course), with David Cheng returning to the front of the camera as Admiral Nogura for the first time since The Human Adventure. 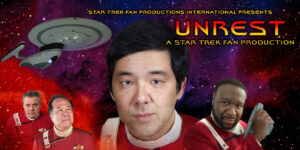 For Christmas of 2020, PEACE AND GOODWILL continued building on their previous steps, incorporating green screen footage composited over digital backgrounds, but now some of those backgrounds included CGI animated VFX shots. Also, a few of the green screen shots were wider angles, showing more of the characters than just their head, shoulders, and torsos. And finally, the size of the cast had grown to six actors, their largest complement yet. 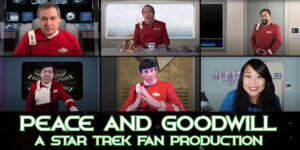 And finally, the month of June 2021 brought their most ambitious project yet, OUTRAGED, with a cast of 15 characters! But even more impressive were scenes that include TWO characters on screen at the same time…even though everyone’s footage was still being filmed separately. Thanks to digital compositing, fans could now see “over-the-shoulder” scenes plus Captain Kirk and Mr. Spock together on the Enterprise bridge, even though Mike Longo and Jens Dombek live on separate continents!

For today’s blog, I bring back showrunner and Admiral Nogura cosplayer David Cheng for another informative interview…

JONATHAN – Obviously, Outraged was “inspired by today’s headlines” (like many of the best Treks). Was there any one particular recent news story that got your writing juices flowing on this one?

DAVID – Over the years, I have seen numerous instances of individuals in politics, entertainment, and sports who allegedly said things or committed acts that some people have deemed offensive.  In some cases, these were done recently and, in other cases, they were done years ago.  As a result of the behavior coming to light, there has usually been a call for the person to resign or be fired from a position.  Often such calls arise quickly, based solely on allegations that may or may not be true, and before the matter is fully investigated.  As science-fiction, and Star Trek in particular, has been a vehicle by which to explore contemporary issues, I thought the topic of cancel culture would make for an interesting Star Trek fan film.  I wanted to explore the different emotions and issues that cancel culture raises. 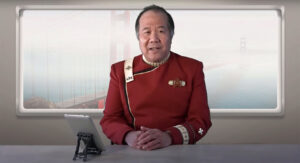 JONATHAN – How long did it take you to write the full script?

DAVID – It took around eight months from the initial draft to the final draft, although I was still revising the last draft even during filming.  This is because I tend to incorporate new ideas as they arise and as I receive feedback from cast members.

JONATHAN – Each new episode from you guys pushes the envelope a little further. This time, it was the addition of the “over the shoulder” shots. What made you think of this clever idea?

DAVID – My friend and film partner, MARK LUM, was the one who strongly suggested that we incorporate over the shoulder shots, as well as reaction shots, when we shoot two people talking to each other.  Over the shoulder shots, however, were virtually impossible to do during the pandemic because we could not have actors physically present in the same room or area.  As you well know, this led to the “fandemic” films in which different actors shot their scenes separately in different locations.

In our films, as well as those of other filmmakers, this led to a format in which characters basically just talked back and forth with each other over view screens.  I decided that, with this film, I needed to incorporate more scenes where it appeared that the actors were in the same room, even though the actors were actually shooting their own scenes separately with green screen.  We made a deliberate effort to shoot over the shoulder shots as part of this process and blend the separately-filmed green screen clips to create the illusion that the actors were in the same room. 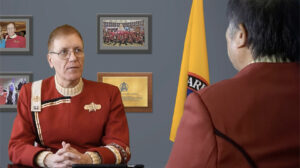 JONATHAN – Your cast size is growing with each new fan film that you release. Are you approaching more people, asking them to appear in your films, or are they approaching you first and then you’re writing parts to include them?

DAVID – The needs of the script always dictate the number of actors that are required.  This particular script incorporated more scenes and more characters, so it necessitated me approaching more people about appearing in the film.  Fortunately, I know a lot of Trekkies who were more than willing to participate in this project.

JONATHAN – What is it like directing 15 different actors (including yourself) who are all in separate locations? Do you rehearse with them and give them actual direction or just email them the script and wait for them to send footage back to you?

DAVID – It is certainly a challenging process to work with so many different actors who are filming themselves in different locations.  In some cases, I sent the actors their dialogue and just waited for them to send the footage to me.  In other cases, I had varying degrees of discussion with the actors about what I was looking for.  So it depended on the specific individual and how much direction they needed.

JONATHAN – It looks as though nearly everyone has their own green screen! Is that correct?

DAVID – Most of the actors had their own green screen and filmed their scenes in front of them.  A few actors shot against other backgrounds.

JONATHAN – How long did it take to get all of this footage from all of these folks? Did they provide multiple takes?

DAVID – I wrote the initial drafts during summer of 2020.  BILL VICTOR ARUCAN was the first to shoot his scenes back then and uploaded the footage for me.  Other people shot their scenes over the ensuing months and sent me their scenes accordingly.  In some cases, I received multiple takes and, in others, I only received single takes. 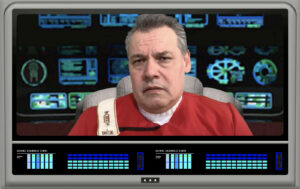 JONATHAN – You and MIKE LONGO are both listed as editors. Usually, a film has only one editor. How do you divide the labor when there’s two of you?

DAVID – Usually, I did the basic editing, and if I was having problems with the chroma-key backgrounds, he would take over and fix that.  Because the footage was coming in at various times from different actors, we often worked piecemeal by editing footage that we already had and then worked on other footage after we received it.

JONATHAN – In your film, the Andorians were angered by an obviously-doctored video of someone wearing what would likely be considered the futuristic equivalent of blackface (blueface?). Do you think that the simple act of putting on blue makeup and wearing fake antennae might, in and of itself, be as offensive to Andorians as putting on dark shoe polish and an afro wig would be to African-Americans? I realize that would have screwed with your story, but it was just something that popped into my head as I watched it.

A:  In our story, it was not the fact that Cadet Curry was dressed as an Andorian that was offensive to the Andorians.  Rather, the offensive acts were his wriggling his antennae and squealing.  So the “blackface” comparison is not quite accurate.  However, just as people today would be outraged by someone who had dressed in blackface even years ago, the Andorians in our film are deeply offended by Cadet Curry’s actions that allegedly occurred thirty years ago. 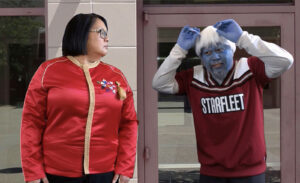 JONATHAN – And finally, what’s next for you and your ever-growing team? What can we expect…and when?

DAVID – I am happy to say that we have, for the moment, put aside our “fandemic” filming and have completed principal photography on our first in-person film since THE HUMAN ADVENTURE.  With this project, we are taking a break from our usual Star Trek movie era characters and moving into The Next Generation movie period.  Our new film is titled BORG HUNTERS and features Captain Harry Kim and Captain Chakotay in an action adventure story that will be different from anything we have done so far.  We are hoping that we can complete the film in the next several months and perhaps release it by the end of the year.

We also have another film, TIME AND TIME AGAIN, which we started shooting in 2019 and had planned to continue shooting in 2020 when the pandemic hit.  We hope to be able to shoot the remaining scenes during the remainder of the year.

Farther out, we will probably work on THE HUMAN ADVENTURE CONTINUES, a sort of follow-up to The Human Adventure.  KENNETH HAYASHIDA is working on a script that would take place between our previously-released Unrest film and Peace And Goodwill movie.  I also have ideas for a story about Captain Sulu’s first mission aboard the U.S.S. Excelsior.  So we have a lot of ideas brewing that may keep us busy for years to come!