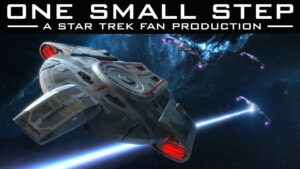 We don’t see much Deep Space Nine in Star Trek fan films. Sure, we get the occasional reference to the Dominion War, as in the Czech fan film SQUADRON, but we typically don’t get to see the U.S.S. Defiant or Deep Space Nine itself. Part of the reason is that it would be nearly impossible for fans on a tight budget to recreate those massive Promenade and Ops sets on the station, or even the smaller bridge of the Defiant. And up until now, there hasn’t really been a decent virtual option to show a CGI background behind an actor filmed against a green screen.

You did notice that I said, “up until now,” right?

CGI Master of the Universe SAMUEL COCKINGS has already become legendary in our community for supplying industry quality visual effects at ridiculously affordable prices for countless Star Trek fan productions (way too many to list, so don’t ask…just look on his IMDb page). Now Sam is becoming just as well known for compositing green screen footage of actors against elaborately realistic 3D backgrounds of familiar starship and shuttlecraft interiors…and his latest interior is the bridge of the Defiant.

Sam pioneered and refined this skill in time collision Star Trek fan film TEMPORAL ANOMALY. He then crowd-funded a crossover film, CONVERGENCE, combining characters and story elements from five different Star Trek fan productions. Unfortunately, repeated COVID quarantines in the U.K. and Europe have prevented all of the actors from getting together in the same place at the same time for filming, and that project remains still in production. 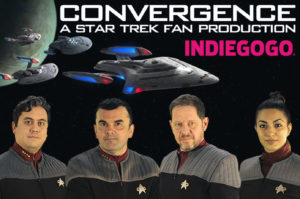 However, that didn’t stop Sam from crowd-funding a second project…or rather, a set of projects. TREK SHORTS would be a series of vignette fan films, shot with smaller casts featuring only one or two actors on screen at once. The successful Indiegogo campaign took in $12.7K intended for the production of SIX separate short fan films. One of those films, the 19-minute A LONG WAY FROM HOME (did I say “short”?), premiered during the campaign and featured four actors, none of whom appeared on screen at the same time…making this technically a “fandemic” film.

But even isolating the actors from each other didn’t solve all of Sam’s COVID problems. On multiple occasions, an actor would test positive, and plans needed to change…often a the last second. This resulting in two “bonus” Trek Shorts releases, HOURS AT WARP and STARGATE SG-1: NEW MISSION (a prequel to a Trek Shorts universe crossover fan film).

Most recently, Sam released yet ANOTHER “bonus” Trek Shorts episode, not previously announced in the Ingiegogo campaign. It features scenes on the U.S.S. Defiant bridge plus a shot of Deep Space Nine at the end, a true rarity in fan films. Take a look…

NIMRAD SAUND stars in the vignette film, once again playing the character of Anna Keely, who previously appeared in A Long Way From Home and (as an ancestor) in Temporal Anomaly. Because of Nim’s proximity to Sam and her willingness to reprise the role, Keely will also be appearing in additional productions from Sam in the near future.

So, what do you say we have a little chat with Mr. Cockings…? 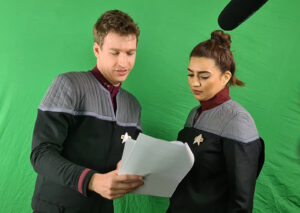 JONATHAN – With this release, you are now up to THREE “bonus” Trek Shorts vignettes. Are any of these replacing any of the planned six fan films that you crowd-funded?

SAMUEL – “Bonus” means bonus. So there will be at least NINE Trek Shorts fan films! How exciting is that!?

JONATHAN – Did all three of these bonus vignettes come into existence because of COVID?

SAMUEL – COVID has been a factor, for sure, but also just simple cast health issues. Around eight times now, a cast member has had to pull out at the last minute, often with others having purchased non-refundable travel/hotel expenses already committed or, in two cases, the actor was already in transit to the studio!

Seven of these eight times I said, “You know what? Everyone else is booked and set to come along, let’s still film something. I will just have to write something different that we can shoot!” So, because of necessity and not wanting to “waste” funds, multiple bonus shorts have been produced! 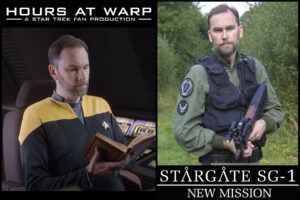 This is what happened with the bonus Stargate short. It had originally been planned to be Day 1 of the SG/Trek crossover. On the other hand, this latest Nim short was, in fact, a bonus I had wanted to shoot after the fantastic fan reaction to A Long Way From Home. I wanted to shoot a “prequel” and get to show more about the character at the start of her journey.

JONATHAN – When were the scenes for One Small Step and the Stargate short filmed?

SAMUEL – Our Stargate short was filmed in July 2021, and the U.K. portion of One Small Step was filmed first in June 2021 with reshoots in January 2022. Our American friends shot their portion with PIXI NEREID playing the Andorian captain in December 2021.

JONATHAN – Yeah, I was very surprised to suddenly see Pixi in the film! She’s based in Arkansas and usually hangs out in the AVALON UNIVERSE. Why did you go all the way to America (figuratively) for the footage of an Andorian captain?  Wouldn’t it have been easier to find someone more local to your island nation?

SAMUEL – So, a BIG part of the Trek Shorts project is the idea of crossovers. I had wanted a familiar face to play the captain of the U.S.S. Challenger. Pixi had just emerged onto the scene as part of the Avalon team in 2021, and I asked if she would voice the character. Of course, if she also wanted go full Andorian make-up, then I’d love to bring that quality. Pixi wanted to go full blue, but her and JOSHUA IRWIN’s schedules meant it took a few months to actually shoot it .

I think she did a really great job and played very different to any character we had seen her play before.

JONATHAN – How long did the VFX take to complete?

SAMUEL – I spent seven days full-time in July creating the Defiant space battle. I got inspired! T his was the first time I had properly gotten to use our Ultra-High-Definition Defiant model AND do a space battle with it, so I worked until it was done! I actually re-did the Galaxy-class shots in January 2022 when a new and fantastic fan 3D model was released to the public!

I’d say I spent, a cumulative, 3-4 weeks texturing/lighting all of the various 3D interiors. I had to commission a full set of LCARS for the Defiant bridge set; that took my artist about 4 weeks. The 3D models themselves, I was having built through 2021, and I’d say perhaps 20 weeks for the interior CGI models used in this film.

JONATHAN – So what’s the latest progress report from the Trek Shorts front?  What footage do you have in the can, and what scenes do you still need to shoot?

SAMUEL – I am THRILLED to say that we have filmed almost everything for the remaining five Indiegogo-pitched films. Most of our international partners have filmed their parts, too. We actually filmed the 2nd and 3rd shoot days for the Stargate/Star Trek crossover this past weekend. That was our last big chunk of those first 5 films, although there are still smaller sections needed, both U.K. and international team-wise. It may have taken longer and been more expensive than I pictured to get here, but we have almost all of it shot!

JONATHAN – When you say “more expensive than I pictured,” does that mean you’re going to need to do more crowd-funding?

SAMUEL – We’ve shot a LOT of filming days in the past nine months…more than I could have imagined. It’s been a blast but also very expensive. It’s AMAZING to be able to create more things than intended, but every new shoot day increases the budget by a fair amount…and we’re at least two dozen bonus shoot days currently.

So yes, budget has been a big concern with us. We are fully committed to get the main five projects completed, but now we have a series of smaller short films also shot. Going over budget at this point is an understatement!

The fact is, Jonathan, that once I was put into the position of designing new short films, that lead to a lot of interesting creative avenues. Being able to link ROBIN HIERT’s character to Nim’s or NICK COOK’s to MARCUS CHURCHILL’s for small characterful stories…this was an amazing opportunity to go beyond what we expected via the Indieogo. But the funds from that were the baseline to get our engines fully revved up and running at full steam.

We were able to purchase the many costumes needed, get them tailored to fit better, buy the custom Trek and Gate props, and so on. These are all real quality improvements and things you will see on screen, and we are so thrilled about that. The issue now is the money spent to actually shoot the shorts that have been filmed and ones we want to finish. Also, flights from Scotland to England aren’t cheap, hotels for actors on multiple days per shoot, I also make sure to cover all food and expenses costs for my actors. When you triple the number of shoot days required, the money spent also goes up…oh, and a few bonus props/costumes for some of the extra ideas! 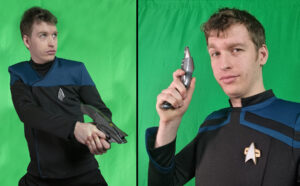 JONATHAN – I’ll take that as a “Yes, we’re going to do more crowd-funding.” So the next question is: when?

SAMUEL – People don’t actually know the full extent of what is planned for Trek Shorts, but I will be launching the Trek Shorts 2.0 Indiegogo later this year to help raise the rest of the budget to finish this collection of shorts. That Indiegogo will go into detail and show a LOT of the amazing visuals we’ve been working on for the past year—from new TNG-era things to Picard flashback-era, and even more crossovers and more styles of films.

Its been a very busy 10 months, and hopefully these new bonus films released at the start of 2022 will impress and show people what we are capable of! The first Indiegogo laid the groundwork, allowing me to spend, for example, $500 dollars JUST on modifications for a set of costumes to fit the actors. And now with that all done, the next Indiegogo will help us close that budget gap and get Trek Shorts finished!

JONATHAN – What are you planning to release next (and after that and after that, etc.), and when do you estimate they’ll be completed?

SAMUEL – My next release is in early April, in fact—something no one’s ever done before in the fan film world! The absolute beauty of creating bonus new shorts is that the’re designed to be far less complicated than the original five larger films. The aim is for another of those to come out at the end of April or early May. The larger films are a whole different beast in terms of time needed to edit them, etc.

SAMUEL – Thanks so much to the fans. Without them, there wouldn’t be an audience or a hunger to see these things! For myself as a creative and filmmaker, it’s been very satisfying to actually do that on my own projects again…not just VFX for other people’s great projects!