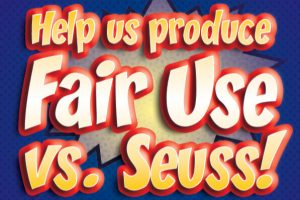 Although this crowd-funding campaign has nothing to do directly with Axanar, it does have to do with a Fair Use lawsuit.  Also, noted Axanar supporter DAVID GERROLD (the Star Trek script writer who created the tribbles and wrote other Trek episodes, as well) is one of the defendants named in this intriguing lawsuit.

As I’ve covered in a series of blogs on Fan Film Factor over the past year, copyright and trademark precedent is being made right under our very noses, and Star Trek is right smack dab in the middle of it!  But this time, it’s not a fan film in the thick of things but an unpublished attempt to mash-up Star Trek and Dr. Seuss into a fun (but allegedly not entirely allowable) illustrated book intended to be titled Oh, The Places You’ll Boldly Go!

Written byDAVID GERROLD and illustrated by TY TEMPLETON (Eisner award-winning mainstream comic book artist), this project was going to be crowd-funded through Kickstarter and managed to raise $30,000 in September of 2016.  But Dr. Seuss Enterprises (DSE) asserted their intellectual property rights, and Kickstarter elected to shut down the campaign.  On November 10, DSE sued Gerrold, Templeton, and ComicMix (the company running the campaign) for both copyright and trademark infringement.

It’s now nearly two years later, and this case is nowhere near done.  In fact, the trial isn’t scheduled to begin until next spring, and the lawyers on both sides have been VERY busy!  But in the meantime, the legal bills are piling up.  This isn’t as much of a problem for DSE, which makes money every time someone buys Green Eggs and Ham or The Lorax, not to mention royalties on all the movie remakes of classic Seuss stories.  ComicMix, on the other hand, is a much smaller company…and apparently, their cash bucket isn’t nearly as deep.  And unfortunately, unlike a certain fan production we all know and love, ComicMix didn’t find attorneys willing to work for free.

And so ComicMix has launched a GoFundMe campaign with a $25,000 goal.  So far, they’ve managed to get about 10% of the way there.

“Why is this worth donating to?” you ask.  I’ll tell you…

First of all, I’m willing to bet that you’ve never contributed to a crowd-funder with a description that was written ENTIRELY IN RHYME!  Having tried myself to write some summaries of this case in verse (because it’s just so tempting to do so!), let me assure you, it’s NOT at all easy.  So I’m not bothered by the rhyming style of the campaign description, and I’m actually rather in awe of it.

And to give you a taste of what was written, let me turn the mic over to ComicMix’s GLENN HAUMAN to answer your question:

“So what?” you may cry. “Just why should I care
About someone suing you over what’s fair?”
Permit me a moment while I count the ways.
The judge said (and here, I must paraphrase):
“Regarding mashups, there is no prior ruling
Addressing the points over which you are dueling!
Your book’s highly transformative! It’s simply not
Merely a copy, like the Seuss lawyers thought
But are you in the right? Mashups might be protected
Or maybe they’re not! You want this case ejected
But sans evidence, the court cannot decide
If it’s fair, so your motion to dismiss denied!
Maybe summary judgment will settle your fate,
But if not, then we’re going to choose a court date.”

Now, it’s taken long months, and it’s cost lots of swag
But we’ve gotten rulings about which we can brag
We got judgement on the pleadings, a partial decision
Leaving only what’s left after the court’s excision.
Unfortunately, now the case REALLY gets pricey,
And if we can’t pay, then the outcome gets dicey.
We’re fighting a company with millions of bucks
And we’ve spent most of ours, which truly just… stinks.

If we lose, then ALL mashups may go through the thresher
And may be deemed infringement. (But hey, no pressure.)

The fight’s now upon us, can’t close the barn door
Lest our loss set a precedent tough to ignore.
And fair use gets wrecked in a Weehawken minute
This case is important, so we have to win it.
And that means there’s something that we have to do:
We need financial help, and we’re turning to YOU.

There’s more, of course, but the main point is that this is actually a VERY important case.  But don’t just take my word for it.  The judge, Hon. Janis Samartino, had this to say in an early opinion:

This case presents an important question regarding the emerging ‘mash-up’ culture where artists combine two independent works in a new and unique way. … Applying the fair use factors in the manner Plaintiff outlines would almost always preclude a finding of fair use under these circumstances. However, if fair use was not viable in a case such as this, an entire body of highly creative work would be effectively foreclosed.

In other words, the outcome of this case could either validate or cripple forever a potentially new form of art beginning to take hold in our society: the mash-up.  Is it straight-up copying (just from two sources instead of one), or is it, as the judge herself ruled, transformative enough to qualify for Fair Use protections?

It’s the First Amendment versus Creator Rights, and it’s by far NOT an open-and-shut case.  In fact, even with the trial still eight months away, the past year and a half of motions, responses, counter-arguments, and pre-trial judicial decisions have been a roller coaster ride.

Or has it been more of a chess game? 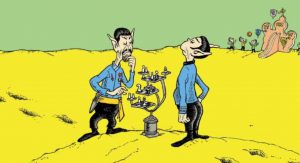 Over on Fan Film Factor, I’ve just taken a closer look at the (mash)ups and downs so far, bringing folks up to date on the judge’s latest two pre-trial orders.  They were both pretty major and could affect this case in very significant ways.  It’s one of those deep-diving blogs where I try to translate legalese into English…just without rhyme (’cause that takes too much time)!

Be the fifth factor in our fair use case!
Every dollar contributed buys breathing space!
(Heck, if only this doggerel just made you laugh
Consider donating a buck and a half.)

If you can’t spare some cash, then please spread the word
Get on social media and help us get heard.