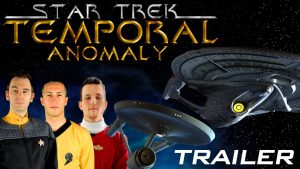 What?  You never heard of the fan film project STAR TREK: TEMPORAL ANOMALY???  Where have you been for the past five years?

Just kidding.  Most members of the fan film community have never heard of this production…even though it goes all the way back to 2013.  In fact, along with Star Trek: Renegades and Star Trek: Deception, Star Trek: Temporal Anomaly was one of the first three Trek fan films to ever fund successfully on Kickstarter.

But while the other two projects were ultimately completed (Deception later in 2013 and Renegades in 2015), Temporal Anomaly seemed to be stuck in a time loop of always seeming to be “coming soon.”  Seven months after their Kickstarter took in £1,741 (about $2,000 at the time), fans saw this pretty simple teaser:

Not much to look at by today’s fan film standards, but back in 2013, that looked like a pretty cool green screen-based fan project.

A year later in late 2014, a new teaser promised a 60-minute long fan film (up from the original 20 minutes originally announced) coming in 2015.  And the visual effects were looking much more exciting:

But 2015 did not bring the completed fan film.  However, a newer, even more impressive 2-minute trailer showed an increasingly impressive compositing of green screen actors against a wide range of starship interior backgrounds.  We also got to see even better VFX and brief clips of Picard and Riker on the bridge of the Enterprise-E:

That was nearly three years ago.  Since then, nothing…

Earlier today, writer/director SAMUEL COCKINGS released a brand new trailer for Temporal Anomaly along with a promise to release the finished film NEXT MONTH!

This new trailer is the best-looking one yet and really blew me away:

So why did this project take so long to finish?  And why do so few fans even know about it?   I posed these questions and many others to Mr. Samuel Cockings myself during an eye-opening audio interview, which I proudly present to you below… 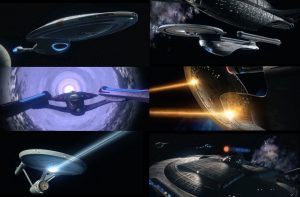 Look for a follow-up interview next month when Star Trek: Temporal Anomaly is released onto the Internet in its entirety!