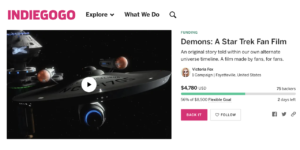 If you donated to the AVALON Indiegogo, please read this blog

First of all, you’ve got until THIS SUNDAY to donate to the Indiegogo campaign for the third AVALON UNIVERSE fan film: “Demons”…so hurry up and click on the link below (or at least share it with friends):

So how did a $500 get lost? No one knows exactly—not even Indiegogo. But here’s what we do know…

On March 28, a generous backer selected one of the four available $500 “Associate Producer” perks and put the the donation onto his debit card. But when he went to check the higher donation total showing his $500, the page displayed the same amount as it had before. So he waited a few minutes for the total to update, but it never did. Then he scrolled down the page and noticed the “Associate Producer” perk still showed 0 of 4 claimed. What the heck?

He immediately suspected that perhaps his donation didn’t go through correctly. So he checked his bank debit app on his phone, and it showed a transaction confirmation for a $500 donation to Indiegogo.

Understandably concerned, the donor contacted VICTORIA FOX and JOSHUA IRWIN, the Avalon show-runners, to let them know what happened. He included a screen cap of the transaction confirmation (which I’ve seen but am not publishing for privacy reasons), and Victoria and Josh then contacted Indiegogo to try to figure out what happened.

Nobody at Indiegogo seems to know yet, but that leaves as many as six additional donors who might not be aware that their donations were charged but not relayed to the campaign. And if Victoria and Joshua don’t know who those six donors are, they can’t send them their perks.

So the Avalon show-runners are reaching out to all of their backers, if they are concerned, to contact Victoria and Josh to confirm that their donations were recorded and they will be receiving their perks. Here’s their message…

To all backers for the Avalon Universe: “Demons” crowdfunding campaign, We’re currently seeking assistance from Indiegogo to uncover the source of the issue and make sure all our contributors are fully accounted for. In the meantime, as we are coming down to the wire on our campaign, we’d like to encourage any backer or potential backer who has encountered problems to reach out to Indiegogo directly for support. Our top concern with this issue is making sure we have all the info needed to fulfill our obligations to our generous backers. If you donated between March 19th and March 30th, and would like to verify that our campaign received your contribution, you may reach us at avalonuniverse.1705@gmail.com

And once again, remember that there are only three days left to donate to this really exciting campaign. All donations appear to be getting through now, and there’s perks starting at levels as low as $5. Every little bit helps!

So please consider making a donation, or at least sharing the link with others…