Fan Film Friday – Lots of updates from THE HOLY CORE 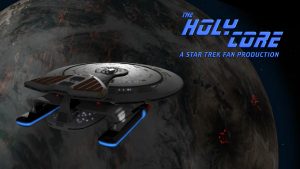 One of the best TNG-era fan films I’ve seen is Chance Encounter, co-written and directed by GARY O’BRIEN out of Great Britain.  It was crowd-funded in mid-2016 for a measly $2,500 (£1,700) and released in February of 2017.  Since then, it’s piled up nearly 85K views and was a finalist in three different categories in this past year’s BJO Awards.

So what is Gary doing for an encore?

The answer to that was almost a very disappointing “nothing,” as a Kickstarter campaign at the beginning of this year for THE HOLY CORE resulted in pledges that didn’t even reach half-way to Gary’s $11,000 (£8,700) goal…and with Kickstarters, if you don’t make it to your goal, you get zero.  But then, a month later on May 7, Gary announced that an angel investor had given him the full amount necessary to complete the entire Holy Core production…!

As you can see from the above Twitter video, there were quite a number of ambitious sets planned for this project, all of them shown with exciting-looking virtual CGI animations.  But could Gary pull off building all of these sets for real…? 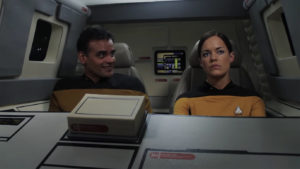 As it happened, one of the sets was already built—the shuttlepod that was originally used for a few brief scenes in Chance Encounter.  This set would be upgraded slightly and re-used for The Holy Core.  But what about the rest of the sets?

When it comes to Star Trek and fan films, Gary is no slouch.  He actually shot his first Trek fan film on VHS back in the 1990s when he was only 13 or 14-years-old!  It was an attempt to recreate the Star Trek: Voyager pilot episode “Caretaker” in his bedroom—complete with homemade sets! 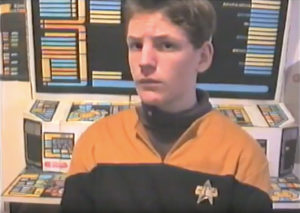 Over the years, Gary honed his skills with constructing sets and props, creating digital visual effects, and building amazing models like this runabout from DS9.  He was also learning to master green screen compositing, as this fun one-minute vignette from 2015 shows…

Needless to say, once l learned that The Holy Core had been funded, I was very eager for updates from Gary!  Back in 2016 when he was producing Chance Encounter, Gary would release frequent short update videos like this one and this one that were really fun to wait for and watch. 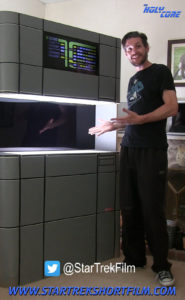 “Now I just need to figure out how to get a cold beer out of this thing!”

Gary didn’t let me down…although the first update wasn’t a video; it was a photo.  But what a photo it was!  Just two months after getting funded, Gary reported in July via Twitter that set construction was underway with this shot of a full-size food replicator.  Gary’s full tweet was:

We’re hard at work building sets for #TheHolyCore TNG Film. Now I just need to figure out how to get a cold beer out of this thing!

It didn’t take long for the next update, which came just over two weeks later announcing that filming had begun, with the first scenes shot in the shuttlepod set… 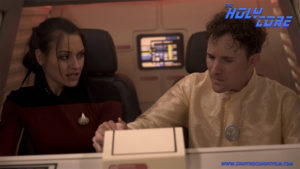 Barely a month later, we finally got to see a VIDEO update (rather than just a photo) when Gary showed fans the full Ready Room set of the USS Vigilance (a Nebula-class starship appearing in the production).  Another day of filming had just wrapped in this set, and we got to see where that awesome replicator was going to be used in the film…

The next update didn’t come until about six weeks later in mid-October, but it just confirmed why I so love Gary O’Brien.  He is a true Trekkie nerd-geek (like me) and took the following photo of himself when he went to pick up the latest printout of his LCARS graphic displays (affectionately named “Okudagrams” after Michael Okuda, the scenic art supervisor on TNG and beyond).  The guy in the photo on the left?  Michael Okuda in the 1980s!

“Something tells me we’re on the right track.”

I was planning a special panel at Axacon giving updates on upcoming Star Trek fan films currently in production or post-production, and so I asked Gary if he could give me anything exclusive to show in Atlanta.  He graciously agreed and sent me his next production update (the first to include completed footage as well as the bridge engineering console!) to show before he posted it to YouTube after Axacon ended… 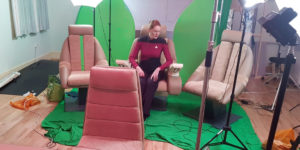 This behind-the-scenes photo let us know a few things:

This time I e-mailed Gary almost immediately to ask if he’d built those chairs himself (they’re amazing!) or borrowed them from someone.  Turns out it was the latter…

The TNG command chairs were a generous loan from James Dillon of USS Rikers Beard. A really nice guy and I got to enjoy a ew beers with him over that shoot weekend too!

I also asked about the sets that he built, and where he was storing them.  The answer wasn’t what I expected…

The only set pieces still left are the shuttlepod (sans chairs which were always a loan for both films). The rest of the sets (except for one Ready Room wall) had to be disposed of the morning after we finished filming with them, as I had nowhere to store them and we had no facility to transport them out that morning anyway.

I held onto the LCARS plexiglass and graphics but that’s about it. I also still have the replicator from the ready room but it’s already starting to deteriorate, unfortunately! If I can’t find a home for the shuttle and replicator by the end of December, then they will have to be destroyed too most likely.

Holy core!  DOES ANYBODY NEED A SHUTTLEPOD INTERIOR???  If you can drive to Oxford, England, the set is waiting for you to save it from the rubbish bin!  (I think that’s how they say “dumpster” in British.)

Gary has since released two more videos, each only a minute-or-so in length but still both REALLY exciting.  The first, on November 26, showed one of those sets that is, sadly, no more (sniff, sniff)…

And finally, the latest video went up this past Sunday, confirming that all principle filming is now complete, and only post production is left to do…

As Gary said, he’s going to work as hard and fast as he can on completing this fan film.  In the update, he estimates April 2019 to be the earliest, but privately to me, he admitted…

I suspect it will end up being later than that.  I won’t be resting on my laurels through post production, but I won’t rush it out until I’m happy either.

Personally, I’m fine waiting a little bit longer for the best possible finished product.  So may the wind be at Gary’s back, and thanks for posting all of those updates, mate!