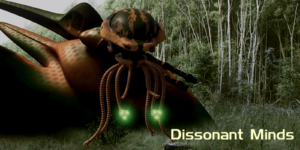 Quick reminder: these nice folks from Scotland currently have an active Indiegogo campaign trying to raise about $2,600. With 17 days left, they’re just $200 short of their $2,600 goal. If you’d like to help them get there, please click the link below…

Scottish fan series STAR TREK: INTREPID began work on their first Trek fan film waaaaay back in 2003. Since then, they’ve completed production on a dozen fan films ranging in length from 6 to 47 minutes. (Read more about their history here.) Their latest release, “Dissonant Minds” came out last week, reconfirming their status as the longest-running, still-active Star Trek fan film group in the world!

Considering that these folks have been producing Trek fan content for 17 years, it may not be as surprising as some might think to discover that a good deal of the footage in this latest fan film was shot back in 2012! Yep, this fan film has been EIGHT YEARS in the making!!! And “Dissonant Minds” also had help from show-runners on three other major Trek fan productions (although it is not a crossover).

So let’s take a look…

If you’re curious which parts are from 2012, it’s all of the outdoor scenes plus the scenes in the governor’s office. What happened to make the production take so long? Well, unfortunately, after a full weekend of grueling filming way back when, a good portion of the outdoor shots turned out to be unusable in the final production for various reasons, and so the footage lingered on a hard drive.

Why not just re-shoot it? Show-runner NICK COOK explained that one of the cast, BODO HARTWIG, lives in Germany, so accommodating his schedule was an issue. “I didn’t feel comfortable asking him to make a second trip to reshoot it,” Nick told me. “The other issue was that this was sort of the start of a period of slow down for us, largely due to me being busy with work and family—and probably a degree of burn out. These films are hard work and can be pretty draining.”

Eventually, the script was reworked to incorporate a number of new scenes to make up for the loss of footage planetside. The bridge, sickbay, and space station scenes were shot separately s few years later on green screen using the revised script. “The original script is quite different and involved a lot more time with Merik and the civilians,” Nick explained. “I really struggled finding the right direction for that revised plot. I had a few dead end ideas over time, but I kept coming back to it.”

And yet, even with more footage filmed, the film didn’t make much more progress in post-production until a fellow fan filmmaker stepped in to help…

“SAMUEL COCKINGS really helped get my head back into it.” Nick continued. “I wasn’t sure we’d ever finish this one. Sam’s enthusiasm, and seeing his effects in the edit, were a real tonic for me. The entire film very much rests on the effects work. It’s the effects that sell it. If I hadn’t had the help of a lot of good people, and the calibre of their work, this film would never have been finished.”

It’s true that Sam’s work in “Dissonant Minds” is magnificent, as usual (he is the Wolfgang Puck of VFX for fan films). He is the first of the three fan film show-runners (TEMPORAL ANOMALY and the upcoming CONVERGENCE) who had a hand in helping Nick complete this fan film. So who are the other two?

The first is ROB CAVES from the long-running southern California-based STAR TREK: HIDDEN FRONTIER fan series. Back in the early days of Intrepid, the two productions used to team up across the Atlantic somewhat regularly. The scene with Admiral Selek on the view screen had originally been shot by the HF folks for a different Intrepid fan film titled “The Conviction of Demons.”

Nick commented about the inclusion of the short scene: “It’s a little bit extraneous, but I wanted to use that footage, since Rob and everyone had gone to the trouble of shooting it for us. I have some other footage they shot for us, but I’m saving that for my fifteen minute cut of ‘The Conviction of Demons.’ Getting this film finished convinced me that I could take the basics of that story and use the footage we’d already shot alongside some new material. So we’ll hopefully manage that at some point this year.

The final show-runner to lend a hand was LEO TIERNEY of the STAR TREK: DECEPTION two-part fan series. Leo did all of the green screen keying—except for the opening office scene with Tagen and Mitchell, which was keyed by STEVE GILSON—and it was a big help.

The last pieces of the puzzle came with the visual FX. In addition to Sam Cockings, who provided the space shots and the crashed spacecraft, HENRY GIBBENS built the 3D Surai model (see the image at the top of this blog) from scratch and then animated and composited the 3D Surai into the live-action shots. “And boy did he do a great job on that,” raves Nick. “It was the last big effect we needed to sell it, so having him agree to do that work was a huge relief. If I hadn’t had the help of all the people I mentioned, and the calibre of their work, this film would never have been finished.”

And before I go, let me end this blog with their blooper reel. Intrepid is (in)famous for releasing bloopers shortly after their films come out. But be warned: there’s some colorful metaphors—quite a few!—so cover up the children’s ears while it plays…