Pretty cool, huh? For those of you unfamiliar with the 1970s sci-fi TV series Space 1999, that trailer is an homage to the way they used to start their episodes (take a look at this video to see an example). The opening credits for that series would include rapid-fire quick cuts from various scenes of “this episode” followed by a slower musical bridge where they would show some of the names behind the production. Then the date would flash: September 13th, 1999—the day the moon supposedly would have been blasted out of earth’s orbit to begin its odyssey through deep space.

Cheesy? Yeah…it was 1975, for gosh sakes! But back then, with Star Trek and Lost in Space in reruns, Doctor Who hidden on weird channels at weird times, and Star Wars still two years away, Space 1999 was one of the only first-run sci-fi games in town. And let’s face it, those eagle transport spacecraft were friggin’ cool! I loved that show, and I loved the opening credits sequences.

So what does any of this have to do with my Axanar Universe fan film Interlude, you ask? Well, technically nothing. That’s not even the actual music I’ll be using (composer KEVIN CROXTON is creating an original score for Interlude).

But I did have this dream a few weeks ago…

I fell asleep with two things on my mind. First, with Interlude entering the final stages of post-production, I needed to figure out a release date. And second, I needed to announce that release date in a cool trailer. Well, technically, I didn’t “need” to do a trailer at all. Many fan films never bother to make trailers. But I always get excited when I see one. It’s that little extra touch that helps build anticipation and give fans and donors something to look forward to. And with a $20K budget, I always felt that Interlude should have a trailer.

And so it was that I dozed off trying to figure out when my release date should be. Initially, I’d planned to debut Interlude along with the first of the AXANAR sequels that ALEC PETERS was going to premiere during the weekend of San Diego Comic Con at a theater close to the Convention Center (similar to what he did with PRELUDE TO AXANAR back in 2014). After all, how much cooler would it be to show Interlude in person to a live theater audience of a few hundred Axanar fans rather than just posting it to YouTube? And Alec was completely on board with the idea. The plan was to show Prelude, then the puppet parody PRELUDE TO AX’D-WE-ARE that I co-produced with animator extraordinaire MARK LARGENT. Then we’d show Interlude and finally the next Axanar sequel “THE GATHERING STORM,” which Alec expected to be ready by Comic Con.

But then the pandemic happened.

San Diego Comic Con was canceled, and the back-up “Plan B” and “Plan C” (Star Trek Las Vegas and Dragon*Con) looked to also be in cancellation jeopardy. Not that it would matter, as the quarantine is delaying production on Axanar, and seems unlikely that we’ll see Axanar before the end of the year at the earliest. On the other hand, it’s looking like Interlude will be done in the next month or two.

So what should I do? I could either hold Interlude until Axanar is ready or else release it before Axanar, potentially creating a little extra excitement and maybe a few donations to Axanar‘s fundraising campaign along the way. In my opinion, the second option has more plusses, and so I went to sleep trying to figure out a release date…

I’m not sure why I dreamed of the Space 1999 opening credits, and I don’t remember much of the dream itself. But my mind had mashed-up some Interlude VFX scenes with Space 1999 eagle scenes, and then I saw the words, “September 8th, 2020” where the “September 13th, 1999” had been. And I recall waking myself up suddenly because, in my dream, I knew I was dreaming and wouldn’t remember unless I woke up. It was weird, but it worked. And I now had a release date: the anniversary of Star Trek…September 8th!

There are a couple of long-awaited, major Star Trek fan films that are almost ready to be released…and I worried that one or the other might grab September 8th. And I was right—a major fan film is planning a September 8th premiere date…and it’s not fair to fans or to my fellow fan filmmakers to double-book the same day. I briefly thought about grabbing September 13th (the same date the moon is blasted from earth’s orbit), but that was only five days after the other big premiere, and I felt that was too close.

The other major fan film release is scheduled for sometime in August. I didn’t want to risk grabbing the same day as the other guy…so August was out, too.

Then it hit me, and the answer was so obvious that I almost felt embarrassed for not thinking of it first. Remember that the initial plan was to debut Interlude at San Diego Comic Con? Well, the convention might have been canceled, but those dates still exist on the calendar. The Saturday of Comic Con would have been July 25, 2020. So that’s when Interlude will be released, my friends. 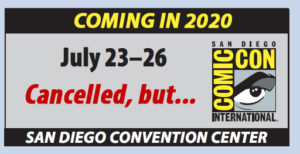 As for the trailer, well, the footage in my dream was pretty vivid and very cool to watch with the Space 1999 music under the quick cuts. In fact, once I’d dreamed it, I almost couldn’t imagine NOT creating my trailer that way. Now I just needed to edit it.

Of course, JOSHUA IRWIN is officially the editor (and director of photography) for Interlude. But he’s been working a ridiculous amount of time making Interlude look totally AWESOME. (Seriously, the man is a genius…and not a stable genius, a real genius!) Anyway, with all the time he’s been spending editing Interlude while he still has all of these other projects on his plate, the last thing I was going to do was ask Josh to cut a trailer for me!

Fortunately, I do have a little bit of editing experience myself. Granted, I can’t hold a candle to Josh, but I did edit this video and this video (and a bunch of others for friends and family and a couple of clients), so I’m not a complete novice. I pulled down the Space 1999 opening credits video from YouTube and assembled quick cuts from Interlude to match it. Fun!

And now you’ve seen about 10% of our fan film, and I think the other 90% is really gonna blow you away. Just two more months, my friends!