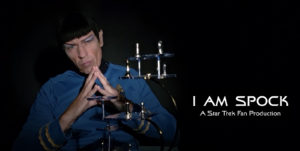 There are some amazing cosplayers and impersonators out there…folks you walk past at conventions and you do a double-take. “Was that…? Nah, couldn’t be! Could it?”

We certainly have our fair share in the world of Star Trek fandom—people who look like William Shatner, Patrick Stewart, Avery Brooks, Deforest Kelley, Brent Spiner, Whoopi Goldberg, the list goes on and on.

But by far, one of the most convincing cosplay impersonators out there has to be JENS (pronounced “YENS”) DOMBEK…also known as “The German Spock.” Born in Berlin and currently a resident of Brieselang, Germany, Jens is completely committed to our favorite Vulcan/Human hybrid, portraying him in all manner of uniforms and clothing…

Recently, Jens appeared alongside MIKE LONGO and FRANK JENKS in a short vignette called LOOK FORWARD TO THE DAY—a subspace “Skype” call among Kirk (played by Mike), McCoy (played by Frank Jenks), and Spock. In the short film, the three friends support each other through a difficult separation, inspired by our current pandemic quarantine. For that fan film, I interviewed writer/producer/director Mike Longo.

Mike had very complimentary things to say about Jens and suggested that I friend him on Facebook and check out the many, many awesome photos he’s posted there…some serious, some hysterically funny, and a few are really clever homages to classic photos that Leonard Nimoy took while playing Spock in the 1960s.

So I reached out to Jens with a friend request, he accepted, and we exchanged a few introductory IMs, all very warm and pleasant. A week later, the following greeting was waiting for me on Saturday morning…

What a wonderful surprise! Jens has continued to provide little sparkles like this in my IMs and has proven to be an officer and a gentleman and an all-around really sweet and awesome guy.

Then, last Friday, Jens sent me a link to his new fan film…

Like many others—including, I am told, people at SYFY (the science fiction channel) who have since reached out to Jens—I was blown away by the simple-yet-complex intensity of a monologue that lasts a total of less than 80 seconds and takes place against a stark and empty black background. One of the best things about fan films is that there are no rules—guidelines, yes, but I’m not talking about those. Fans can add in or leave out whatever they want. And in this short film, so much was left out in order to distill a haunting but loving tribute to the “emotionless,” logical first officer of the starship Enterprise.

Even though Mike Longo wrote and edited this fan film, just as he did the previous one from two weeks ago, Jens produced, directed, and stars in “I Am Spock”—and I felt he deserved a turn to be interviewed.

And when you’re the German Spock, there’s a LOT to talk about…! 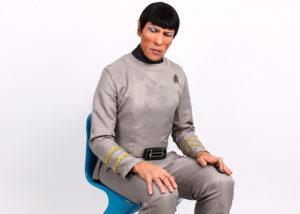 JONATHAN – Okay, Jens, so the most important question on everyone’s mind has to be: is that your real hair or do you wear a wig?

JENS – Years ago, I had surprised my boss with the Spock hairstyle and thus strained his nerves. (laughs) Since I interact with many customers from home and abroad, he preferred that I present more of a familiar “human” impression and wear a regular haircut. Profession is profession and hobby is hobby…so I got a matching wig and shaved my original brown hair for it.

JONATHAN – So what do you do for a living when you are not Spock?

JENS – I studied business informatics and work as such in a large corporation. I supervise software products and their interfaces. I also advise users on how to handle the applications.

JONATHAN – I’m told that you are the same age as Star Trek (both born in 1966), and that you have a birthday that has some Star Trek significance, as well…is that correct? 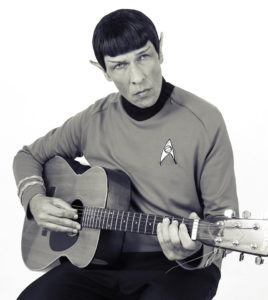 JENS – This is absolutely correct, and at this point, I would like to thank my parents for their precision! (smile) I was born on the 17th of January. “1701” is therefore, in fact, even more important to me than the registration number of the USS Enterprise (NCC-1701). This connection makes me very proud, even if when I look back on my life, it seems a bit scary that the Star Trek world has been with me since I was in the cradle.

JONATHAN – So did you watch Star Trek while you were growing up, or did your fandom come later on?

JENS – In the mid-seventies, one Saturday night, 06:00pm, my father called me into the living room to start a new series. For me, this day was the beginning of my new world: Star Trek!

JONATHAN – Has Spock always been your favorite character, or was there a time when you preferred another member of the crew more?

JENS – From the first moment I saw the character of Spock, I knew I wanted to be like him, and there was never another character for me. The fascination of this Vulcan has stayed with me to this day. 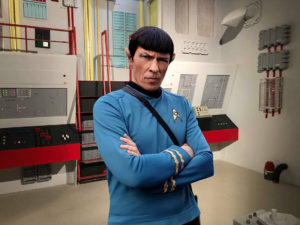 JONATHAN – How did you first come to cosplay as Mr. Spock?

JENS – As I said, it has been with me all my life, starting with playing with friends, little Super 8 video shoots in the 80s and 90s. Every party where you were allowed to dress up, I used to present myself as a Spock and improved my costume. I carved a phaser out of wood and painted it, built a communicator out of old metal parts, made ears out of paper, glued them on, and painted them in my skin color. Thanks to my grandma, who was able to sew really well, I always had a very good uniform. At the time, I was thrilled with many of my friends who followed my hobby and dressed appropriately, and we met regularly for Star Trek evenings.

In fact, my first big event was as Spock in 2014 at the Destination Star Trek -Germany, a huge convention. I didn’t know the scale of the Star Trek fans gathering at the time, but I watched videos from previous years on the Internet and decided to enjoy the three days as a Spock at this convention.

Everyone knows Spock‘s distinct face, and I was unsure if anyone would actually identify me as a Spock cosplay at all, because even when I was completely finished in make-up, I doubted…I still saw Jens in the mirror. Then the first encounter with like-minded people—I felt the eyes, but I couldn’t classify them.

I had a first startling situation at a booth where Tribbles were sold when the seller was completely terrified, almost awe-inspired, and told me that I had to go “there“ and pointed to the VIP area. He actually assumed I was Leonard Nimoy and Spock was at his booth! He asked again, pointing to a Spock poster, if I wouldn’t be…unbelievable this moment.

Such situations have been, and still are, happening. I am happy to give people a beautiful and familiar feeling, just through my cosplay presence. 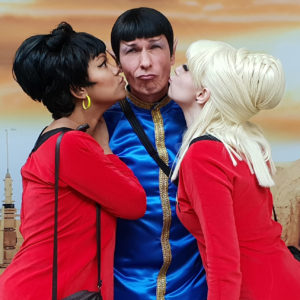 JONATHAN – When and how did that first experience playing Spock turn into a career as “The German Spock”?

JENS – Oh, it kind of promoted itself! No matter where I was cosplaying as Spock, there were dozens of contact requests on the table, cameras aimed at me and selfie requests that followed me even to the toilet at a convention…no joke!

The science fiction TV channel SYFY started a first interview with me and that was probably the beginning. This was followed by further interviews, bookings, reports, and photo sessions for advertising camps and many visits to charity events. I remember clearly how, at the time, I had no idea about social media and had to learn all sorts of things in no time!

JONATHAN – Before the pandemic, you flew around the world playing Spock in various venues.  How did that work?  Did people hire you?  Did you get paid?  Where did you appear, and what did those appearances entail?

JENS – I honestly did not expect this dynamic of so much exposure, but I was all the more pleased about the desire to book myself as a Spock doppelgänger. I was sometimes unable to cope with the booking requests on my own and was supported by an agency. Last year, in addition to countless events, there was a special request even to go to Costa Rica, on a NASA theme, because a training center was built there. This combined with visits to a hospital with seriously ill children and a subsequent presence in a local school. This should have taken place in March of this year, but unfortunately…there is this little enemy we’re all fighting! 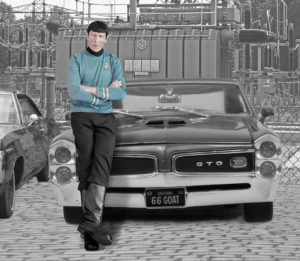 JONATHAN – Did you ever meet Leonard Nimoy?

JENS – Honestly, this is one of the most sore points in my life that I can’t handle to this day. No, I never met him, and that really hurts me a lot. I am happy for all those who have taken part in this special feature and enjoy the stories of those who met him! But fate still smiles on me, and so over time I’ve gotten to know some of his close companions, and friendships developed. So out of connection, very personal things were sent from him and gave me the feeling of trust.

One time I almost had a face-to-face meeting with him. The autograph session and photo story with Leonard Nimoy was booked, but due to his failing health in 2014, his visit to Germany was cancelled on short notice. But I had also booked a photo shoot with the Captain of the Enterprise, and so I went to my photo appointment with William Shatner instead.

JONATHAN – What did Shatner say when he saw you as Spock?

Man, I love ending 2-part blog interviews on a cliffhanger! Come back next week as our questions shift to Jens’ involvement in Star Trek fan films. This IS Fan Film Factor, after all. In the meantime, please enjoy some of my favorite humorous photos from Jens’ Facebook gallery… 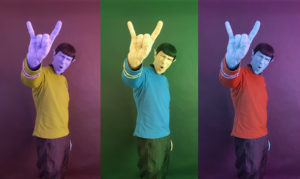