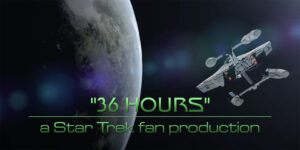 All told, the latest episode of STARSHIP TRISTAN, “36 Hours,” is the 90th(!!!) fan film from the fine folks at POTEMKIN PICTURES (and you can watch all of their releases here on their website). Their very first fan series, PROJECT: POTEMKIN, ran for 36 episodes…beginning all the way back in late 2010 and wrapping up six years later.

Tristan was their second fan series (now referred to as a “Creative Group”), beginning in late 2015 and still going today. Of all of their remaining eight groups, Tristan has the most releases, with “36 Hours” being the 21st production overall to be posted to YouTube.

I mean, it got filmed, but it almost didn’t get completed and might have had to be scrapped…and this would have been a true pity, as several of the actors in it won’t be able to continue to be involved now that show-runner RANDY LANDERS—along with all of the sets—have relocated 6 hours north from their former location near Birmingham, Alabama to Lexington, KY.

This blog tells the story of how this one fan film was saved from digital oblivion during post production. Some fans are aware that that are three phases of development for a film project: pre-production (planning and getting everything ready), production (actual filming), and post-production (putting the pieces of the puzzle together and making sure everything looks and sounds good). You might think that, once you’ve shot all of your footage, that editing and post-production are fairly simple and straightforward. Well, it turns out that sometimes things are quite a bit more challenging.

To help tell this “story behind the story,” I have two fellows who helped make “36 Hours” happen. Randy Landers was the director, executive producer, and co-writer; and RICK FOXX was co-executive producer and also co-writer. However, in addition to sharing writing credits, Randy and Rick also shared editing duty—although you’ll only find Rick’s name as editor in the credits. Why is that? You’ll need to read the interview below.

And now, let’s chat with RANDY and RICK…

RANDY – Actually, this was the last film we shot before shutting down Studio 3 in Birmingham before our move to Lexington and building Studio 4. My wife’s contract lapsed in March 2019. They gave her an excellent severance package, and we had some time for her to find a job that she would like in Birmingham. In April, we shot a Deimos production (one of our best, in fact). Then in May, we scheduled this Tristan shoot, but only half the cast was available. I went ahead with the shoot, thinking that we would do pickup shots later in the summer.

Linda and I were both thinking that she would find suitable employment sooner rather than later. In June, we were going to shoot for Marie Curie, but none of the cast were available, so I cancelled it. Then in July, Linda accepted a new position in Lexington, so I cancelled the scheduled Endeavour shoot and began breaking down the sets. In August, we relocated to Lexington.

JONATHAN – So you never actually finished filming all of the actors needed for this episode?

RANDY – No, but I decided to try editing it together anyway. The beginning and ending worked for me, and those scenes remained completely intact…setting up the imposed 36 hours of ALEX WILLIAMS’ character having nothing to do. We were going for a day-in-the-life sort of thing, so I cut it together into a long montage of scenes with a countdown clock. But those sequences just didn’t engage me as the editor (or as the ultimate viewer). It wasn’t Alex. It was what I had inserted. It just wasn’t interesting enough to work for me. Imagine five minutes of brushing teeth, exercising, showering, reading, eating several meals, studying, etc….not good visuals. I tried editing for months to make it work in post-production, but I failed.

JONATHAN – So what did you do?

RANDY – I turned the project over to Rick, who has carte blanche on productions. Rick rewrote the script, and we recorded new audio from Alex Williams (actually recorded twice).

RICK – After cataloging the footage, I created a rough edit based on the script. It was clear right away that there was no cohesive story, other than the mandatory leave. Knowing that this might be the final Tristan story, I wanted to find a way to give the cast a bit of a send off. The letter home felt like the right place to expand the story.

The sets had already been struck, and the new production was running in Lexington, but Randy was able to line up Alex to record a voiceover with DAVID CARROLL, who had the proper recording equipment. I wrote the dialog for the new letter to home and then scraped together snippets from B-roll and outtakes to edit the montage. Alex did a great job bringing emotion into her letter, and that really sold the story.

RANDY – So we lost the 36-hour countdown clock plus a lot of the day in the life stuff…and added stock footage to allow her to introduce her friends aboard the Tristan. It worked a lot better, and Rick literally saved the production. Then we turned to composer TONY LUNN and asked him to provide the soundtrack, had ROSS TROWBRIDGE do the three VFX shots, put a pretty bow on it, and released it almost two years after it was shot.

We’re very proud of the job Alex, KIMBERLY WHITE, SCARLET HUO, AUSTIN REDMAYNE, CHARLES ROGERS, and CHERYL SAHAWNEH did on this production. Also very proud of the work Ross and Tony did, but especially Rick Foxx, who was able to save what almost became a “lost”production.

JONATHAN – Speaking of lost productions, is this the swan song for this team? With the move to Kentucky, will the Starship Tristan creative group be able to continue, or will that noble vessel finally be heading into drydock?

RANDY – Nope. Tristan will go from 6 films per year to 1 per year. Kimberly White, Alex William’s and Christin Woods want to return. Others do not. We will have to come up with a date for the shoot that all three can agree on, and then find some local cast and crew to make it happen. It’s at least a 6 hour drive for each of them, so that’s not gonna be easy.

JONATHAN – Well, I’ll keep my fingers crossed. Tristan is the only current fan production to feature a Constellation-class starship like Picard’s U.S.S. Stargazer.