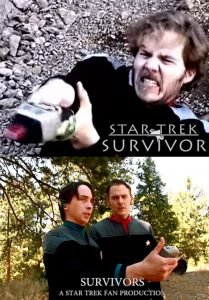 How many people does it take to make a Star Trek fan film?

Think about the actors, writer(s), director, camera people, sound people, lighting people, costumers, make-up, props people, set designers and builders, special effects, visual FX, music composers, editor…and don’t forget all the production assistants and even the folks who bring the snacks, do the catering, or just run our for pizza.

For the “big” productions, like Star Trek Continues or Axanar, the number can be 50 or even 100 people! For some of the smaller productions, maybe one or two dozen.

Considering the small size of the production team, the fan film itself was quite ambitious…with on-location shooting at multiple locations, a lot of physical acting, diverse and dynamic camera angles, and original music. And while a super-low budget necessitated the use of a few toys and collectibles in place of expensive animatronic monsters or familiar Star Trek actors, the story was darkly engaging, and the acting was surprisingly strong for an amateur production.

Seven years went by, and Star Trek: Survivor seemed content to hold its place in fan film history as a simple one-off project. I wrote a Fan Film Friday blog about it early on, and then I moved onto other fan projects, thinking that was it for this fan producer . But last month, Matthew Blackburn surprised me with a SEQUEL!!!

This 15-minute film was titled SURVIVORS: A Star Trek Fan Production and follows the new guidelines. (Its predecessor predates them.) Also filled with on-location shots and physical stunts, this time the production team had grown to SIX people (music and visual effects were now outsourced), but Matthew Blackburn’s name still appeared all over the credits.

So it seemed like a good idea to contact this Matthew fellow and see if he wanted to do an interview. What was it like shooting a fan film with such a small production team? And why wait seven whole years to do a sequel?

After an hour of talking to him, I realized that the chat was so interesting that this interview might be a good candidate for my new AUDIO interview format.

I’ll warn you folks right now, we tried to avoid spoilers…we really did! But alas, it turned out to be beyond our meager abilities and will power. So I’m recommending that you watch the two relatively short films first (only 25 minutes total…less if you skip the credits!). Then listen to the interview right after.

And now, here’s the interview in two parts (WordPress doesn’t allow for a file size large enough to 60 uninterrupted minutes, so I needed to split it)… 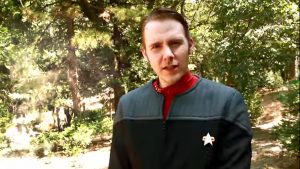