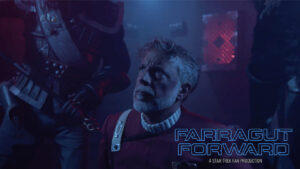 Back in 2016, after a decade of producing an impressive parade of both live-action and animated Star Trek fan films, the team at STARSHIP FARRAGUT began production on the series finale “Homecoming.” But the bittersweet ending to this celebrated fan series was much more sweet than bitter because, at the same time, they announced plans to begin production on a new project that would take the crew forward into the Star Trek movie era…complete with monster maroon uniforms and brand new sets! (You can read the full history of Starship Farragut starting here.)

Farragut Films had already distinguished itself as capable of building jaw-dropping TOS set recreations, having constructed most of the Constitution-class heavy cruiser sets that are currently housed in Kingsland, GA, sets that have also been used for the fan series STAR TREK CONTINUES, DREADNOUGHT DOMINION, AVALON UNIVERSE, TALES FROM THE NEUTRAL ZONE, CONSTAR CHRONICLES, and many others. Imagine what these guys could do with movie-era sets!

But then, shortly after the announcement of the fan film guidelines in June of 2016, Farragut showrunner and lead actor JOHN BROUGHTON all but disappeared from the fan film community, and the series finale remained uncompleted and unreleased. As for Farragut Forward, an announcement was made that the planned series was being tabled.

Then everything changed on a dime. In the span of just two months last year, an announcement came in August that Farragut Forward was now officially in pre-production, and in October “Homecoming” was finally released! Fans were really excited at both developments but especially that the new movie-era fan film would be produced…and not just by any ol’ director. John Broughton had teamed with KAOTICA STUDIOS in the Washington, DC area, and specifically with director JOHNNY K. (he likes to use just his last initial professionally), whose camera and lighting skills are truly impressive. In fact, his debut independent film, The Killer of Grassy Ridge, has since earned a dozen different awards in film festivals around the world.

Johnny K. has brought that same finesse to the new Farragut Forward project, and John B. has brought along props, a couple of new Klingon bird-of-prey sets, and the spiffiest monster maroon uniform you will ever see in a fan film (and probably even in studio-produced Star Trek!). Don’t believe me? Well, you can see for yourself, as they have already released the opening three minutes of the project in a vignette titled PROLOGUE…

Of course, there’s a LOT more sets to build and costumes to craft (by hand!)—plus all of the other costs of production like equipment, studio space, food, make-up supplies, etc. And all that stuff doesn’t exactly come free. So Farragut Forward has launched a brand new, 60-day Indiegogo campaign trying to reach an ambitious goal of $30K!

They’re off to a decent start, having generated more than $2,223 in donations in just over a week—approximately 7% of the way to their goal. But if fans want to see more movie-era Farragut, they’re going to need a lot more support, which you can help with here:

Of course, I wouldn’t want anyone to donate to a crowd-funder without hearing from the folks behind it, and so I hooked up for a Zoom chat with John B. and Johnny K. to discuss their plans, hopes, dreams, and all sorts of other fascinating stuff. Take a look (and a listen)…