If you’re anything like me, you just looked at the above image and asked, “Wait, is this a FAN film???” And yes, yes it is.

Neither of the above should surprise fans familiar with the team behind this production. Led by JOHN BROUGHTON, many of these folks are the same people who designed and built most of the incredible TOS set reproductions still being used at NEUTRAL ZONE STUDIOS in Kingsland, GA. Others are brand new to the adventure of constructing Star Trek sets, but the one thing they have in common is that their work looks incredible…

And beyond those amazing sets, the costumes are uncanny in their accuracy. Not only will this production be featuring monster maroons, hand-crafted and tailored to each individual actor, but they’ve also recreated movie-era engineering radiation suits and some of the best cadet uniforms I have ever seen…and that includes the ones in Star Trek II! No, seriously. Take a look at actress DANA NORVILLE—quite possibly the first person from Barbados to ever appear in a Star Trek fan film—wearing her costume… 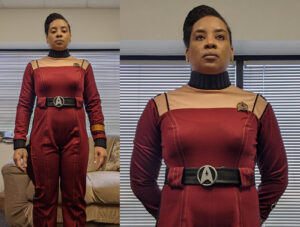 In the case of one actor, JONATHON JAMES, only half a costume was needed, as Jonathon already had a very nice Anovos monster maroon. So John Broughton just sewed him up a pair of pants with the right striping, and another background extra was now properly dressed… 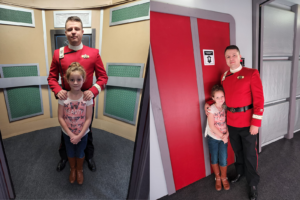 It was “take-your-daughter to the future day” for Jonathon James, who described the experience of being on set as “an absolute dream come true.”

Of course, none of those sets or costumes would have been possible without the money to pay for them, much of which was supplied by enthusiastic and supportive fans (like me!) through their Indiegogo. And although the campaign officially “ended” back in April of this year, because it reached and surpassed its goal, Farragut Forward gets to continue on as an “In Demand” status crowd-funder. And that means that fans can STILL donate, even now! Indeed, since April, an additional $1,500 has come in with even more possible. In fact, you can donate right now at the link below…

The biggest news so far happened over the weekend of October 8-9 when, after years of anticipation and months of pre-production, filming actually began! With all of these unbelievable movie-era sets fully assembled and actors wearing these intricate movie-era uniforms, the cameras began rolling in Frederick, Maryland, with results that looked like this…

Director JOHNNY K. (he goes professionally by that name, using his last initial) of KAOTICA STUDIOS reports that, “Filming went off without a hitch. Those were some very long days (16 hours each for many of the crew), but it all worked out and we made our days. The Saturday sets were struck to make room for Sunday sets. It was action-packed. There was running, jolting, falling, actors being carried through frame, stunts, and even pyrotechnics. The camera only crashed to the ground once as I was sprinting down a corridor behind some crewmen, so I consider that a win.”

Dana Norville confirmed that this was a very physical shoot. She posted to Facebook: “We had a long day filming yesterday, everywhere hurts today, but it was so worth it! The raw cut videos were awesome, I’m proud of this one. Working on set with the cast and crew, they were so professional and amazing, very social. One of the best productions I’ve worked on thus far.” 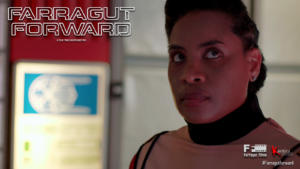 Johnny K. provides some more details: “On Day 1, we shot three different scenes in our sick bay set, including one of the most complex scenes of the entire film. There were more than a dozen crew members in frame, and it required lots of rehearsals, blocking, and choreography to get it all just right, plus pyrotechnics and in-camera practical effects. It was a real challenge, but we were prepared, and the final result is well worth all that effort.”

Speaking of effort, perhaps no actor was put through the ringer physically as much as DAVID AGRINSONIS. David might be familiar to some Starship Farragut fans from his appearances in their episode “Conspiracy of Innocence” as a gold-shirted helm officer and then as a Mirror Universe villain in their next episode, “The Crossing. He also appeared in their series finale, Homecoming. 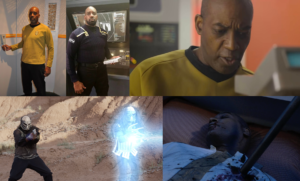 The many fan film appearances of David Agrinsonis

David is also a bit of a “Where’s Waldo” of Star Trek fan films, having also appeared briefly in PACIFIC 201; in the AVALON UNIVERSE releases DEMONS, AIR AND DARKNESS, and AGENT OF NEW WORLDS; and as blink-and-you’ll-miss-him Admiral Ramirez lying in the U.S.S. Ares sick bay in INTERLUDE.

This is how David will look in Farragut Forward… 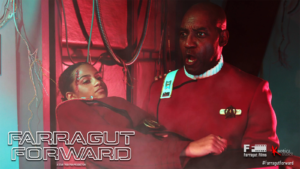 You might notice that David is carrying a female crew member. What you might not know is that David will be turning 69 on November 5. A trained martial artist, David is in amazing shape and could very likely take on anyone reading this blog in a fair fight and probably still kick all of our asses!

That said, Johnny K. rolled a LOT of takes of this shot of the carry. “Yeah,” says David, “with my scene, I think it was about 29 takes. My arms began to hurt around take #19. It was pretty exhausting. So much so that, after I’d said my line 26 times…I asked Johnny, ‘What am I supposed to say again?’”

I messaged Johnny about making poor David carry this person into sickbay 29 times, and Johnny replied, “Haha. I think it was closer to 18 times, including rehearsals.” That’s still a lot of carries for anybody, I say! So props to David for being such a good sport about it. He also got to show off for his 87-year-old mother, who joined him on the trip from Cleveland to Frederick for the weekend to see what all this fan film fuss was about.

“It’s been 6 long years since I’ve worked on a Farragut shoot,” says David, “and I am glad to be back on the movie set, back in uniform. It was a lot of hard, fun work, but I am still glad to have been there. Johnny creates movie magic. He pays attention to small details.”

“Besides all the action scenes,” Johnny adds, “we also captured some amazing performances by our actors. We have some very talented actors working in this film, and that was immediately obvious.” 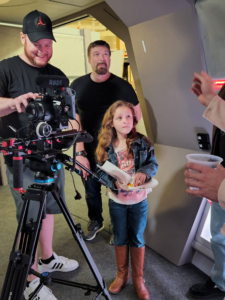 Johnny K. (left) readies the camera for a corridor shot.

Johnny, who has directed a number of short films (which you can read more about on the Kaotica website), contrasts Farragut Forward with typical film projects. “Unlike other productions where the entire film may be shot within just a few weeks, Farragut Forward is a marathon, not a sprint, and we’re shooting it in phases over many months. We shot eight scenes during our first two days of filming, and rough cuts of those scenes have already been edited with initial color grades, VFX, and sound design. Now we’re giving the crew a well-earned break and then moving into Phase 2 of filming in the next few months.”

For anyone wondering if these sets will be left standing like the ones in Kingsland, the answer is sadly already “no.” According to a Facebook post from John Broughton, he and a “strike crew” made up of RODNEY GARRETT, DAVE MORETTI, SCOTT EINOLF, JOHN VITALE, and CASE AIKEN “…deconstructed, organized and stowed away our corridor, sickbay and crew quarters sets, lightening and set decorations. With Phase I completed of filming for Farragut Forward, we now embark on Phase II, which is will be filming on the Klingon sets this December. 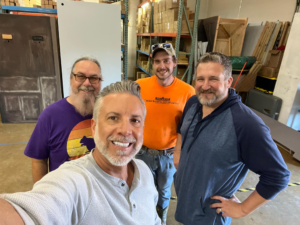 Johnny reminds folks that donations are still more than welcome, as there is much left to do and pay for: “We are still funding, and my hope is that once people see the quality of what we’re creating, that we can raise even more money and get closer to our $50,000 limit. Lumber isn’t cheap, and our Klingon sets aren’t going to build themselves. So we’re asking everyone who can to please look at the quality of work we’re doing and help us make it even better.” Once again, click the link below to donate…

And finally, here are some awesome set photos posted to the Facebook page of Dave Moretti… 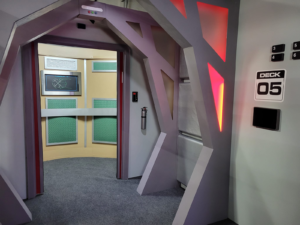 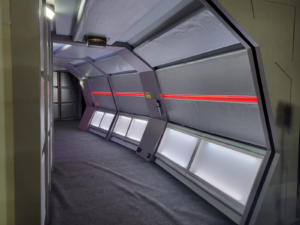