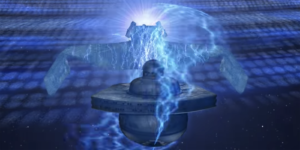 Last month marked the 40th anniversary of the December 1979 release of STAR TREK: THE MOTION PICTURE.  In acknowledgement of that milestone, I have a special set of fan animation (fanimation) projects to share with you today.

The first Star Trek feature film elicited mixed reviews from fans (and from the general public). Some Trekkers consider it a masterful exploration of the iconic characters of the Enterprise crew with breathtaking production values and a sweeping musical score that updates the 1960’s television series and prepares it for a bright future on the big screen. Other fans see it as a plodding snooze-fest of slow, indulgent editing—an opinion often sarcastically supported by pointing out that the Enterprise crew are all wearing pajamas, as if to say this movie will put us all to sleep.

But the one thing that nearly every fan and viewer agrees on is that the visual effects sequences are stunning and some of the grandest, most beautiful, and unforgettable in Star Trek‘s 50-plus year history. Among the most iconic and well-remembered of the segments were the introduction of the refit USS Enterprise with Kirk and Scotty flying around it for nearly five minutes (too long?—poppycock!), the opening sequence of the the three Klingon battlecruisers confronting and then being destroyed by V’ger, and the refit Enterprise leaving dry dock.

Those VFX sequences, overseen by the legendary DOUG TRUMBULL (who did the Enterprise shots) and JOHN DYKSTRA (who handled the Klingons, the Epsilon IX space station, and other segments) were rushed together in less than six months using models and blue screens and contraptions like periscopes to get cameras within inches of the amazingly detailed models. To see the finished breathtaking scenes, one would hardly think any of them were created with anything other than the most painstaking attention to detail over years…not simply months.

But apparently, there were indeed some mistakes. And now a fan has fixed those mistakes—not with physical models and high quality camera equipment but instead using only his computer…

Now, if you ask me, as amazing as CGI is, I agree with SETH MacFARLANE that there’s still nothing quite like a physical model (which is why The Orville uses an actual physical model in addition to having computer-generated shots). However, I also freely acknowledge that there are things you can do with a computer that would be impossible in the “real” world of models and cameras.

And with that, I would like to re-introduce a CGI artist known only as “ANTI-MATTER.” I featured him briefly a few months ago in a blog focusing on what I’ve decided to call “fanimations”—fan films using only CGI with little no actor involvement…letting the starship sequences tell the story. His one-minute piece Bully Ballet was the first of five videos I included in that blog.

Anti-Matter utilizes After Effects, AVI Synth, Lightwave 3D, Mocha, Photoshop, and Sony Vegas. His YouTube channel, deLimited Productions, features a wide variety of offerings where Anti-Matter takes existing Star Trek movies and re-edits them, inserting new digital CGI footage and sometimes rearranging the live-action scenes around them. His work on his YouTube channel stretches back for nearly a decade.

Anti-Matter did a wonderful reimagining of VFX for Star Trek V: The Final Frontier (renaming it Star Trek V: Beyond the Barrier). He also took a crack at re-editing Kirk’s death in his video Star Trek Regeneration. His versions aren’t necessarily better (or worse) than the originals. But they’re interesting alternate interpretations that make one wonder what might have been…

Anti-Matter is currently working on an ambitious project intended to replace all of the VFX sequences in Star Trek II: The Wrath of Khan that were simply re-used shots from The Motion Picture (done that way to save money in the sequel’s production budget). You can view his progress on that project and commentary in this playlist.

But today I’d like to focus on his work recreating VFX shots from the original Star Trek: The Motion Picture, a project that began for him back in 2015. He tackled two of the three iconic sequences I mentioned earlier: Dykstra’s Klingon attack on V’ger and Trumbull’s Enterprise departure from dry dock. (And frankly, I can’t imagine making the five-minute fly-by “tour” of the new Enterprise being done any better than it originally was…even with the best CGI in the galaxy.)

Again, I’m not suggesting Anti-Matter’s versions are better or worse than Dykstra’s or Trumbull’s. There’s some things I like more and some things I don’t think are as good. But regardless, I think the sequences are very well crafted and visually dynamic—certainly a good watch.

By the way, the following video featuring the Klingon attack (starting at 3:20) ends with an intriguing re-edit of the officer’s lounge scene with Kirk, Spock, and McCoy. There’s no CGI in that last segment, but the idea of splicing in the clips of Spock on Vulcan as flashbacks is a very intriguing idea…

For a comparison to the original (or rather, the director’s cut version), click here.

The next video addresses the sequence that Doug Trumbull and his team created to show the Enterprise leaving dry dock. The final CGI segment that Anti-Matter created (which incorporates the live-action scenes on the bridge during departure) is about four minutes long but comes at the end of a 17-minute video. The first 13 minutes, however, provide a fascinating critical commentary on the original shots and why some of them—beautiful though they are—simply do not work in the “reality” of the full sequence. You’ll see what I mean when you watch it…

And finally, there’s a short sequence that us still being worked on. Anti-Matter took a stab at redoing the wormhole sequence with the asteroid. Although this is an exciting scene to watch and helps to develop the character interplay between Kirk and Decker, I personally was never thrilled with how it came out originally. Aside from the fact that the camera doesn’t really shake even though the entire crew does (totally ruins it for me!), I always felt that the wormhole itself looked too much like one of those spirograph toys that were so popular in the 1970s when I was growing up.

Anti-Matter fixes that—or at least starts to—in a new sequence that is, in some spots, not only exciting and captivating but actually almost terrifying (thanks to some new audio sound FX)! It’s still a work-in-progress right now, but even unfinished, it’s pretty amazing. Check it out…

I really do hope Anti-Matter completes this wormhole sequence. And of course, I’ll keep an eye out for more animations from him. Heck, we’re now less than two and a half years away from the 40th anniversary of Star Trek II: The Wrath of Khan!