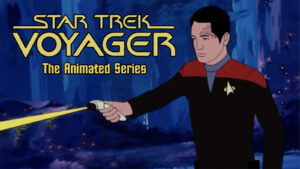 Two months after the release of the STAR TREK: THE NEXT GENERATION – THE ANIMATED SERIES fan film (and less than a month after I featured the short vignette here on the Axanar website), Toronto-based animator and co-founder of GAZELLE AUTOMATIONS, JUSTIN LEE, has done it all over again!

Previously, Justin took a 2-minute sequence from the top-rated TNG episode “The Best of Both Worlds, Part 1” where Picard is kidnapped off the bridge by Borg drones, and adapted it to look and sound just like an episode of the Star Trek animated series from 1973. This creative and unique little video quickly went viral, and as I type this two months after its release, YouTube has it at nearly half a million views! WOW!!!

This time, it’s Voyager‘s turn (what about poor Deep Space Nine???). But while Justin chose one of TNG‘s generally-accepted BEST episodes to adapt, in the case of Voyager, he chose arguably one of the worst—the late-second season episode “Threshold” where Paris and Janeway slowly evolve into giant space-salamanders so they can mate and reproduce. Yeah, just writing that last sentence made me cringe! But watch until the very end because Justin concludes the vignette so perfectly that it almost makes up for the real “Threshold” (or at least acknowledges the ridiculous ending)…

This one seems to be going viral nearly as quickly as the TNG one, with nearly than 300K views in less than a week!

Justin already did a more elaborate interview me last time, but after watching the above video, I had a whole slew of NEW questions. Fortunately, being Canadian (in other words, being super-nice), Justin was more than happy to provide answers at infinite warp speed…! 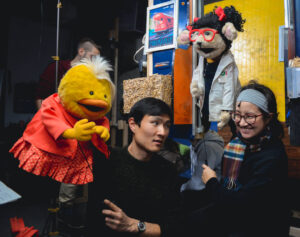 JUSTIN LEE, his wife LINDSAY LEE, and some of their puppets

JONATHAN – Welcome back, Justin…been a long time, hasn’t it?

JONATHAN – So you “leapfrogged” over DS9. Any reason you skipped directly to Voyager?

JUSTIN – Hehe, definitely no intentional leapfrogging over DS9—I love DS9! But none of this has had any kind of grand plan. I think TNG:TAS only got finished because I had a little time off from work…which is one reason why VOY:TAS was harder to make (things got busy!).

JONATHAN – “Threshold” is widely panned as one of Voyager‘s weakest and most ridiculous episodes. Why choose to go from “first to worst,” as it were? (Although I will admit that your ending was brilliant and almost makes up for the inane conclusion of the original!)

JUSTIN I wasn’t sure I’d make a second one at all! I initially hesitated to make TNG:TAS for months because it was going to be a silly amount of work for the result, so I was on the fence about doing another one.

But I’m also a hardcore Star Trek fan, and it was really cool that so many fellow fans enjoyed TNG:TAS. So I pored through lists of possible episodes for ages until I settled on “Threshold.” It wasn’t even the first one I tried. Something that stuck in my brain was reading comments on TNG:TAS that said, “I just watched ‘The Best of Both Worlds,’ and I was picturing your cartoon when Picard was abducted.” So instead of going for another cherished episode, I started wondering what would happen if I took a largely panned episode—one that’s so ridiculous to begin with—and made it a cartoon.

I’d recently re-watched “The Ambergris Element,” a TAS episode in which Kirk and Spock become amphibians. So I started to think “Threshold” actually might work better as a cartoon. I’m totally delighted (and relieved?) to see lots of fans who’ve seen VOY:TAS feel the same way! 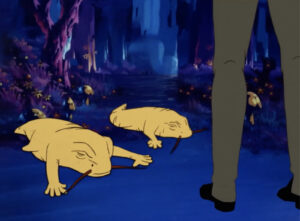 JONATHAN – This production was more than twice as long as your first undertaking, and looked much more elaborate in terms of the variety of backgrounds and characters featured. Did this one subsequently take over twice as long to complete?

JUSTIN – VOY:TAS took more than twice the amount of work/time as TNG:TAS for sure…which, of course, is my own doing because I wanted to stick to the Voyager audio timing (not edit anything down) while still beginning with Janeway as Janeway and ending with the babies coming out. As you said, the increased number of backgrounds and characters made this thing balloon, and I was busy with work, as well. The night/morning I released it, my brain felt like it was going to transwap just pushing to finish it!

JONATHAN – At 5:05 and 5:32, there was a “flipped” shot of Chakotay and Tuvok with their comm badges, rank pins, and Chakotay’s tattoo on the wrong sides. What that “oopsie” on purpose because TAS occasionally did the same thing? 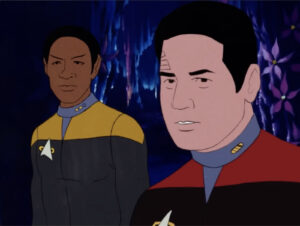 JUSTIN – Absolutely the mirrored shots are there intentionally, as with lots of other cel animation idiosyncrasies I snuck in. And while doing that mirroring thing actually did save me time on those shots (much as it would’ve the people at Filmation), most of the other mistakes or imperfections had to be purposefully added…stuff like cels shifting when they shouldn’t or a particular cel being dirtier than the rest. It’s very funny to me that including mistakes Filmation wouldn’t have wanted takes MORE effort.

JONATHAN – 75K views in 24 hours and nearly 300K in five days is pretty impressive, as once again, you didn’t really have any advance marketing on this (did you?). Most Star Trek fan film releases never even get into the five-digit range of views (many don’t make it to four digits!). Since your Gazelle Automations channel has less than 7K subscribers, what do you think is happening to make your releases go viral so quickly?

JUSTIN – I’m happy fellow fans are finding and enjoying it! We had planned to tease the release of VOY:TAS with a Gazelle Automations update video, previewing it along with upcoming stuff and jobs we’re working on, but we didn’t end up having time to make that. If I were to guess why these Trek videos have found audiences, I think it’s because they can be enjoyed for different reasons. Some might be TAS fans first, so seeing something kind of new in that style is fun. Some might have never seen TAS but like the twist of seeing their favourite Trek as a cartoon. And of course, there are fans (I guess like me) who love both TAS and the TNG-era and like to see them merged (Tuvix’d?). 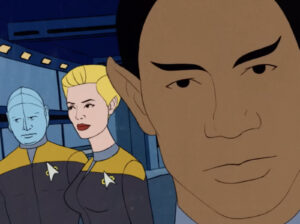 JONATHAN – Ah, Tuvix—there’s a character who needs to be animated! And speaking of which…one release is a fluke, a curiosity, an itch to scratch. Two in two months, though, that’s the start of a series! Will you be doing more of these wonderful little treasures? You’re obviously developing quite a following!

JUSTIN – It’d really be fun to make another. If people want to see more, the best way they can support us is by checking out our other work. Our Miikshi series is still pretty new, which we literally began making in the cramped back room of a pizza shop as short films before it turned into a kids series for Canadian broadcaster TVO. We also have a new sci-fi short in the works called Space Bao—think Star Fox but they deliver food, and it’s brought to life with model miniatures and animation.

JONATHAN – I look forward to checking it out when it’s done, Justin. Thanks for another great interview!

JUSTIN – Thanks for the wonderful questions, Jonathan!