Last week on Halloween day, two brand new Star Trek fan films debuted on YouTube. I haven’t had a chance yet to cover either because I was overseeing a Halloween carnival at my son’s school last Thursday and then flying to Georgia over the weekend to make a fan film. But during this past week, one of those two fan films, the Avalon Universe episode DEMONS (Segment One) has already attracted over 26K views on YouTube as I write this. (And Segment Two has over a thousand views in just seven hours.)

The other Halloween release last week was the latest episode of the long-running DREADNOUGHT DOMINION: “The Heist.” Since debuting, the Youtube view count for this fan film is currently a whopping…356. And that, my friends, is the main reason why I am covering Dominion first here on Fan Film Factor…well, that and the fact that I still need to interview the Demons directors—who are also MY fan film’s directors—and they are both VERY sleep deprived from an incredible weekend of fan filming along with two 12-hour one-way drives between Arkansas and Georgia!

There’s really no direct comparison between these two productions beyond the fact that some of the flashbacks in Demons were filmed at Neutral Zone Studios in Kingsland, GA…which is also where Dominion films. (Avalon now shoots at WARP 66 Studios in Arkansas.) But in terms of acting, lighting, sound, and a slew of other technical elements, Demons is clearly the superior production. However, if that is the only reason you’re watching Star Trek fan films, you’re missing a big part of what this community is all about!

Both of these projects have HEART. In fact, Dreadnought Dominion is one of those fan series that, I believe, epitomizes the very core of what makes fan films so special: FANS. They don’t do this necessarily to dazzle you with their acting or filmmaking prowess. They’re not looking to win awards or get millions of views on Youtube. Folks like Dreadnought Dominion, Potemkin Pictures, VANCE MAJOR’s Minard and Constar Chronicles—plus a host of others—do this because it’s an itch they have to scratch. They want to tell their Star Trek stories, and they want to have fun along the way. They’re not afraid or embarrassed to put themselves out there for all to see…nor should they be!

So I ask you all who are reading this blog today to give this latest episode of Dominion a watch. Let’s up their view count a bit. Fans with heart, who love Star Trek just as much as you do, deserve our support and encouragement. Then, after you watch, take a minute or two to read the following short interview with show-runner GARY DAVIS further down this blog page…

JONATHAN – So, Gary, what was most unique about the production of this particular episode?

GARY – What was unique about this episode was it was ORIGINALLY intended to be the “story within the story” for our previous episode “Redemption at Red Medusa.”  While we were tackling the issues in that production, the away team would be conducting their “heist.” Due to the CBS fan film guidelines, we decided to chop the story into two distinct separate productions.

JONATHAN – What challenges did you encounter this time that you hadn’t needed to deal with before?

GARY – There were none for the shipboard scenes, as they were filmed during our time while we filmed “Redemption at Red Medusa” as if we were still doing one long production.

The planet-side scenes WERE a challenge since we had to find a location that would portray a place found in the 23rd century! We were very fortunate that contacts of Randy’s [RANDY WRENN…co-showrunner – Jonathan] in his acting circles volunteered their home for our base camp and makeup department.  They also allowed us to rent a space at their community center for the shoot. A SINGLE room there was shot from every conceivable angle to make it look like all the interior locations in a futuristic residence.  THAT, along with a very loud air conditioning system that we could not turn off,  were challenging…however, we feel we pulled it off!

JONATHAN – How did you find your cast? Some of these folks are new to Dominion…will they return?

GARY – Randy has a vast “network” of contacts in the acting community in and around Charlotte, NC, and has worked with these VERY talented actors in the past.  Our additions came from that area, and they were thrilled about journeying to Kingsland, GA to be on the sets!  One actress should be joining us a series regular, and the other two we HOPE to work with again.  They were just a PLEASURE to work with.

I commented when we were doing the Briefing Room scene that I felt like the only “Plain Jane in a Miss America Pageant!” The actors knew their lines backwards and forwards and even helped the amateur in the room, me, with my lines.  The scene played out very well, and everyone was pleased. 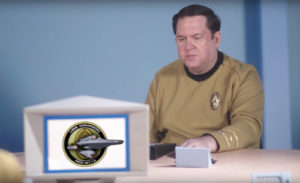 JONATHAN – How long did it take to produce this episode from inception to release?

GARY – As I commented about “Redemption at Red Medusa,” “The Heist” was written six years ago as part of the “Redemption” story treatment.   So it took as long as the last production, in a sense, and came to fruition at almost the same time.  We had most of the shots done by the summer; we just took our sweet time editing it, as we wanted to leave a little bit of space between production releases.

JONATHAN – So what’s next for your fan series?

GARY – ANOTHER BRAND NEW ADVENTURE that didn’t take us six years to make!  Our next story story has been written for about that long, but we took it out of the cupboard, dusted it off, and shined it up for shooting in FEBRUARY of 2020! This episode will feature some action, some amazing CGI shots, a love story, and our first red shirt doing (on screen) what red shirts tend to do.  <wink>

We are continuing our GoFundMe, which is netting us funds to help pay for our studio rental, CGI Shots from the great SAMUEL COCKINGS, as well as costumes for the production. Dreadnought Dominion is going PLANET-SIDE again this production, but to a place far less hospitable than the one we visited in “The Heist.” Soooooo, we need landing party jackets!  I love to come up with new costumes that look 23rd century-ish but obtainable with 21st century materials…and on a budget!  We have a good design that we hope will play out well on camera!  Be looking for “We Are Many” possibly by the SUMMER of 2020!

To donate a little sumthin’-sumthin’ to this very deserving and hard-working project, please click on the link below…