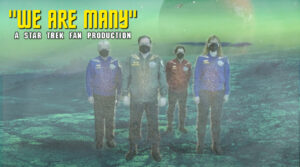 Over the last half-decade, the cast and crew of the fan series DREADNOUGHT DOMINION have served up a steady and consistent meal of ten fan films ranging in length from short vignettes up to full episodes 22 minutes in length. This is particularly impressive considering that the two show-runners, GARY DAVIS and RANDY WRENN, live in Ohio and North Carolina, respectively, and they film at NEUTRAL ZONE STUDIOS in Kingsland, Georgia with many cast and crew members from out of state, as well.

Last month, Dreadnought Dominion released their longest production yet, taking the full half-hour allowed by the fan film guidelines. Titled “We Are Many,” their latest fan film was written by Randy and co-directed by Randy and Gary together. The episode has a very “classic” TOS Star Trek feel to it, complete with red-shirted crew members you’ve never seen before playing a major part in the storyline. But before I spoil it, why don’t you just take a look for yourself…

There’s much to like there, and some definite things I wanted to ask Gary Davis about…specifically those really cool-looking landing party jackets. I totally want one now!

Anyway, I reached out to Gary, and he had a lot to say—and not only about the jackets. Let’s go to the chat…

JONATHAN – Okay, Gary, how can I get one of those amazing landing party jackets??? 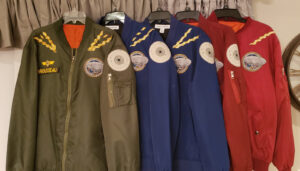 GARY – Haha! Okay, I’ll share. We’ve got nothing to hide. I actually wracked my brain trying to design a landing party jacket that was functional, looked good, and didn’t break the bank! I made them myself with jackets from Amazon in the colors I needed. Here’s links for those…

Then I added patches and rank braids. You can get the rank braid here:
https://www.ebay.com/itm/Star-Trek-TOS-Rank-Braid-1st-2nd-Season-Captain-Kirk-cosplay/272761422538

There’s enough braid in one order for both sides of the collar. I also found this specifically for the captain rank:
https://www.ebay.com/itm/Star-Trek-TOS-Rank-1st-Season-Captain-Kirk-Wrap-Uniform-Braid-Set-cosplay/282065615986

The element I’m most proud of is the ship’s patch. While not canon in any sense of the word, I just thought the jacket NEEDED something. Of course, fans can put on any ship’s patch or emblem they want there. It could be the U.S.S. Enterprise, a Starfleet or UFP logo, or something from a different fan film or series. I know that a lot of crowd-funding campaigns used to offer patches as perks…if donors still have them.

Next up were the wings and name tag. You can get the wings here (they’re actually from Star Wars, but almost no one will notice):
https://www.ebay.com/itm/STAR-WARS-PILOT-GOLD-WINGS-PATCH-STW64/252216330417

And the tag can be customized with any name before ordering from here:
https://www.amazon.com/gp/product/B07K1F16V5/ref=ppx_yo_dt_b_search_asin_title?ie=UTF8&psc=1

Then I mixed in the landing party patch from ST:II TWOK and BOOM…TOS Landing Party Jacket! You can get that patch from here:
https://www.ebay.com/itm/Star-Trek-Iron-On-TWOK-Solar-System-Jacket-Shoulder-Patch/254747488188

These were so fun to make and to wear! I would be happy to make jackets for anyone. If they’re interested, they can post something into the comments, and I’ll contact them with the price. 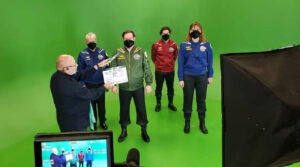 JONATHAN – Awesome. And thanks for all of those links! Now let’s start talking about your latest release. I noticed that, during the beam-down and when you’re on the planet, that you and the crew are wearing masks. Was that a clever way of filming those scenes safely during the pandemic?

GARY – I knew that question would pop up! Believe it or not, no. This was shot back in February…BEFORE the pandemic started to spread and masks to be worn! When we were editing it while on lockdown, I kept telling Randy that folks are gonna think we either predicted COVID or else our message is: “Don’t take your mask off!” (since our security guy bought it in such a spectacular fashion because he took his mask off).

JONATHAN – Holy moley! I totally thought this was another of those “fandemic” fan films and that you’d come up with a really awesome way to work masks into your story. But no…you absolutely did predict what was to come, Gary! You must be clairvoyant.

JONATHAN – So how long did it take to shoot all of this?

GARY – We shot for four days on two locations: at Neutral Zone Studios in Kingsland, GA and at the the Golden Isles Career Academy in Brunswick, GA. The Neutral Zone is just OUTSTANDING to shoot at…as always. Then, for our planet scene, we were offered use of an AMAZING green screen studio that was JUST finished by the faculty and students at the Career Academy. We were so honored to “break it in.” We had teachers and students watch us film, and they were such great hosts!

JONATHAN – Most fan films that use green screen just for close-ups and upper body shots. But you guys did it with wide, framing shots featuring full bodies in frame. How did that compare to doing “simpler” green screen filming?

GARY – Green screen itself is a very difficult medium to work with, as we needed to worry about editing and compositing it later. So positioning our camera, trying to imagine not only what wasn’t there, but HOW we could add it later, that was tough. We also made the rookie mistake of MOVING our camera as we walked. So editing it so that it looked as if the landscape was moving correctly proved to be a major challenge.

But as always, Randy and I “learned on the fly” and applied new lessons and “tricks” as best we could to make it LOOK like we actually knew what we were doing. Randy even learned Adobe AfterEffects so he could do the security guard “dissolve” effect. He knew what he wanted to to make it look like, but translating that to to an available effect that he could ACUALLY pull off proved challenging…but FUN! He really brought his A-game on this and the effect turned out very satisfying.

JONATHAN – Speaking of effects, another triumph by the wunderkind of fan film CGI, Mr. SAMUEL COCKINGS!

GARY – We can’t say enough great things about Sam! Did you know we were actually in his queue behind STAR TREK: FIRST FRONTIER? Sam had to get their shots completed before moving on to ours. However, after that project was complete…WOW…he really delivered. I think the VFX for this show came out awesome. From the planet and moon to the NEW Dominion render! 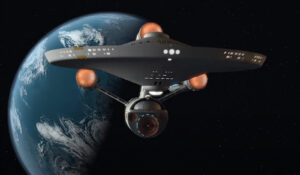 GARY – Once that was completed, Sam just POWERED THROUGH the VFX and we had all our shots. Randy and I even did some of our own VFX…like the aforementioned “dissolving” of our security officer, and the final “Oh, wow!” shot of the moon colliding with the planet.

JONATHAN – So, were you guys working on your side of the pond while Sam (in Great Britain) was working on his side?

GARY – We actually had it completed during the summer, in all honesty, so we had to wait for Sam to complete his work on First Frontier before dropping in his shots.

Randy and I used the early months of the lockdown to edit the footage, sound effects, and add the music. Randy is a MASTER at laying out footage. We “round robin” the editing and pass the file back and forth. He is a great partner to work with. We both stress over the details and are like school kids with a new toy when we do something major…or even minor that NO one but us will ever notice!

So February to October—that is the LONGEST it’s taken us to put a production out! However, it was worth the wait, and it gave Randy and me the chance to just NITPICK and smooth everything out to our satisfaction.

JONATHAN – So what’s up next for Dreadnought Dominion?

GARY – We have TWO shoots scheduled already for 2021—one in January and one in February. Our January shoot has our series creator, FRANK PARKER, JR., returning as Admiral Grissom!

JONATHAN – Whoa! That’s HUGE news! Frank left your series as a commodore back in 2015, as I remember.

GARY – Yes, but now he’s coming back for a shoot that will serve as a “pilot” for his upcoming Dreadnought Dominion spin-off series CROSSROADS. Grissom is leaving his post as Starfleet Commandant to take command of a new ship.

Then in February, we will be shooting another Dreadnought Dominion episode, and we’ll HOPEFULLY be returning to the Career Academy to do another green screen shoot.

And finally, Dreadnought Dominion will have ANOTHER spin-off series: PROJECT RUNABOUT. I’m building a TOS Runabout set here in Ohio. We’ll have new crews and new adventures withRandy Wrenn and me primarily behind the camera for this series.

JONATHAN – So how far in advance do you schedule your shoots?

GARY – We have always proposed shooting dates at least two to three months ahead. We poll the group, and they have always confirmed the first date…which is amazing. What is also amazing is the amount of drop-ins we get from folks who get wind of a shoot date, and we get them as extras. We have two VERY integral members of our cast now who were originally drop-ins. They heard about the shoots, just showed up, and we put them in as extras…then they became series regulars. Our Romulan Commander is one. She was a simple nurse extra, but she did SUCH a good job. she’s now our “Nurse Chapel,” and she doubles as our Romulan Commander. She heard we needed a Romulan and said, “I’ll do it,” and she just NAILED that role! She’s coming back as our Romulan Commander in February.

Its amazing when I put out a call for a shoot, and EVERYONE says “yes,” and they just COME!

JONATHAN – May it always be that way, my friend!