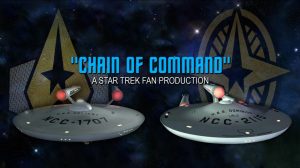 Back in April of 2015, a new Star Trek fan series called DREADNOUGHT DOMINION premiered with its initial episode, “Haunted.”  Three months later, a second episode, titled “Anchors Aweigh” (a bit of a prequel to the first episode), made its debut.  It wasn’t the only TOS-era fan series to feature the crew of a non-heavy cruiser class starship, but it was the first and only one to feature the crew of a Starfleet dreadnought-class starship based on the mid-1970s Franz Joseph Star Trek Technical Manual. 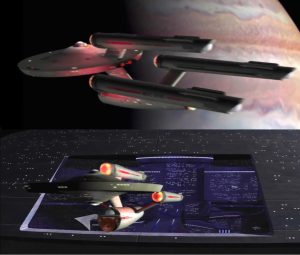 Thanks to a 3D model created by Kenneth Thomson, Jr. and Thomas Phong, the beauty shots of the tri-nacelled USS Dominion in the opening credits and during the episodes were gorgeous.  The two episodes were filmed primarily on the very impressive TOS sets in Starship Farragut’s Studio Two in Kingsland, GA (also the shooting location of Star Trek Continues).

A year earlier, another fan series, Starship Valiant, made its debut on YouTube with an introduction vignette titled “Legacy.”  Valiant was filmed using the TOS bridge set at Starbase Studios in Oklahoma City.  (The following year, a “special edition” version of “Legacy” with added footage was posted after Starbase Studios built a new sickbay set.)  Valiant has since completed some principal filming on its second episode “The Ties That Bind,” although production is still ongoing and the second episode hasn’t been released yet.

So what do these two fan series–filmed in different locations in different states during different years–have in common?  A man named Vance… 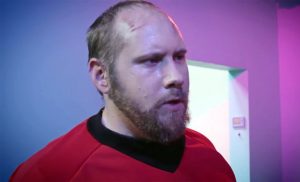 Vance Major Owen plays Engineer Minard in Starship Valiant. Based in Kansas, Vance has become a very active part of Starbase Studios in Oklahoma City (only a short 4-hour drive away…each way!) and is also now producing other fan series that are shooting there, including Melbourne and Starship Republic, both of which will be debuting new episodes soon.

In the meantime, over in Georgia, the situation changed quite a bit for Dreadnought Dominion.  At the end of 2014 (a year after filming had wrapped on Dominion‘s initial two episodes), Star Trek Continues bought out Farragut Films’s share of the Kingsland studio and sets and became the sole owner of everything.  Dreadnought Dominion had to find a new home to film in.  That’s when Vance came through and suggested Starbase Studios, which is happy to be a resource to any fan series or film that needs TOS sets and is willing to pay simply for the cost of electricity.

Vance told me that he doesn’t remember exactly how he became an executive producer on Dreadnought Dominion, but somehow it happened…making Vance the only Trek fan filmmaker to be involved in FOUR different Trek fan series at the same time! 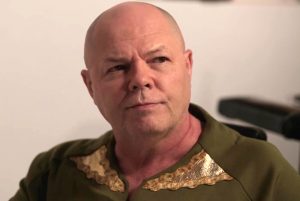 Initially, Dominion planned to film a third full-length episode entitled “Redemption at Red Medusa,” full of action and adventure (which had previously not been a hallmark of the series), and bringing many elements of the story there were started in “Anchors Aweigh” and “Haunted” to a close.  Unfortunately, the move from Georgia to Oklahoma cost Dominion its lead actor and series creator, Frank Parker, Jr., who played Commodore Samuel Grissom, Dominion‘s commanding officer.  According to Vance, Frank tried to stay with the series, but in the end, it wasn’t manageable. 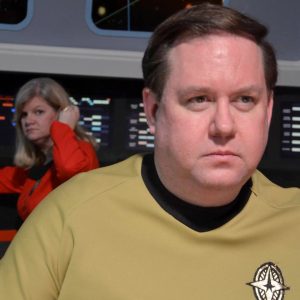 But the rest of the Dominion team wanted to move forward nonetheless; they simply needed a new captain.  Fortunately, Starfleet allows for that, as folks get promoted and reassigned from time to time.  And so Gary Davis, who had played Commander Jason Brousseau, the first officer during Dominion‘s first two episodes, got a promotion to Captain and now has to choose his new “number one.”  In fact, that’s most of the plot for their newest episode, “Chain of Command.”

Yeah, I know I said their third episode was going to be titled “Redemption at Red Medusa”…and it still is.  Vance describes this episode as more of an “episode 2.5” than a true “episode 3.”  Rather than just suddenly starting up with a brand new captain, this interim episode provides a bridge (no pun intended) from the old Dominion to the new.  And because Vance is now the producer (and a member of the Starship Valiant cast), it seemed like a fun idea to have Dominion‘s new captain mulling over his important decision with an old friend on the USS Valiant, Lt. Commander Minard.  There are also cameos by several other members of Valiant‘s crew, including her captain, Jack Bishop (played by Michael L. King).

Despite being the transition episode between Dominion‘s old and new leading actor, “Chain of Command” is indeed a true crossover of two series in all senses of the word.  The episode shares writers, directors, and producers from both series: Gary Davis from Dominion and Vance Owen from Valiant…plus David R. Wrenn, also from Dominion, joining them as co-writer.  Gary directed all of the Dominion scenes, which were filmed in Ohio and North Carolina, while Vance directed the scenes on the bridge of the Valiant in Oklahoma.

Vance is the first to admit that this fan film doesn’t nearly match the quality of the top ones out there.  Most scenes were filmed with cell phones without proper lighting or sound equipment.  The “actors” are all fans (in other words, not real actors or even drama students…just fans).  And the non-Starbase Studios sets are pretty sparse.  In fact, the engineering “set” behind Dominion‘s Chief Engineer Stephen Denson (played by co-writer David R. Wrenn) is just a composited background.  If you look closely, you can see just the slightest glow of the green screen around the edges of his red engineering tunic. 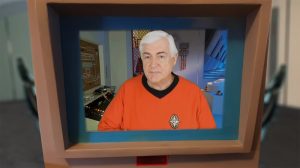 But if you’re watching fan films like “Chain of Command” expecting to see high-quality cinematic masterpieces, you’re not really doing it right.  These are labors of love created by dedicated fans who just want to have a little fun and play for a bit in the Star Trek sandbox.  Don’t look at the loose-fitting uniforms or the hint of a white T-shirt under the black collar.  Don’t expect to see stunning physiques and perfect postures.  Don’t question the wisdom of assigning a captain who agonizes over the choice of exec to lead a space vessel designed primarily for armed engagement that requires confident, split-second command decisions.  That’s not the point of fan films, folks.

Instead, celebrate “Chain of Command” as a cool crossover idea uniting the cast and crews of two different fan series.  Rejoice in the fact that Dreadnought Dominion will continue, keeping its place at an ever-growing table of Star Trek fan series that are doing their best to follow as many of the new guidelines as possible (except, of course, for the crippling “no continuing fan series” rule…that one has GOT to go!).

So sit back, grab a bag of microwave popcorn (or pop it in canola oil; it’s healthier), and enjoy the this brand new crossover fan production…