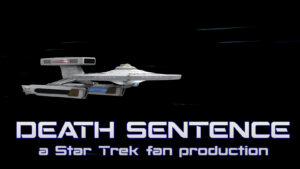 The creation of a fan film (like the creation of any creative work) can often involve the unexpected. And in those cases, the persons doing the creating often have to adapt, adjust, and put in extra efforts that they hadn’t previously planned for. Otherwise, the unexpected can become a death sentence for a project like a Star Trek fan film. And indeed, the mark of a good creative team is how they tackle those unexpected challenges and still complete their production.

And that’s what happened with the second release from the STARSHIP CALIBORN creative group: “DEATH SENTENCE.” One of many teams producing fan films for POTEMKIN PICTURES at the moment, the majority of those involved with Caliborn are based in the Lexington, Kentucky area near showrunner RANDY LANDERS. Usually, Randy also takes an active role in either writing and/or directing Potemkin Pictures releases. But this time, his efforts were limited to film editing and playing a (comic) relief helmsman on the Caliborn named Peter Reigert, a recurring and somewhat incompetent officer who keeps getting booted off various ships.

“Death Sentence” was directed by ROBIN KUNKEL, who joined Potemkin Pictures recently and was listed as a producer on Caliborn‘s first release “WAR TARG” earlier this year. The writers were HOMER EVERSOLE and his brother DAVID EVERSOLE, both of whom had separately started writing Potemkin Pictures episodes back in 2016. In fact, David penned “The Night the Stars Fell from the Sky,” the most-watched of any Potemkin fan film with 155K views.

“Death Sentence” was the brothers’ first collaboration, originally intended to be an episode of STARSHIP WEBSTER, the other Starfleet-based creative group located in Lexington. However, when COVID hit and the Webster folks suspended production until the pandemic eased up, the Eversoles adjusted their script for Caliborn instead. Tragically, Homer passed away a year ago at the too-young age of 56, before seeing his final fan film completed. This is how it turned out…

But while losing one of the writers was certainly a blow, that wasn’t the unexpected obstacle(s) that needed to be dealt with. Let me tell you what was…

Originally, “Death Sentence” was shot on two different Saturdays—one at Studio 4 (a.k.a. Randy’s house) and one on location at Belleau Woods Park, both in Lexington. And in the park, they actually used a drone for the first time in any Potemkin production to get certain footage . The drone was controlled by ANDREW ORTWEIN.

Randy’s storyboard for the establishing drone shot. “This is why I don’t do storyboards,” says Randy, “but it’s amazing that we found a location just like that.” Click to enlarge.

All of the footage then went to Randy to edit, and he assembled a rough cut for director Robin and drone operator/producer Andrew to look over. A rough cut is meant to be critiqued and tweaked, and it’s also an opportunity to point out what’s not working and might require reworking. And that’s exactly what happened: Randy pointed out some shortcomings with the footage, and so did Andrew and Robin. As a team, they decided that they needed to get additional footage, which would require reassembling the cast and going back on location.

And that’s when the unexpected happened. One of the six actors, SARAH HOLTON (who played the doctor), was on tour for several weeks with an Irish dance company (they won first prize with a performance in Canada, by the way). So it was a couple of months before the team could regroup to shoot the pick-up scenes. However, by then, Sarah had cut her hair, meaning the footage wouldn’t match…another unexpected speed bump.

Ultimately, they opted to put Sarah in a wig that had longer hair. The only problem was that the wig color (which was basic blonde) didn’t match Sarah’s hair color in the original footage, with had pinkish/reddish highlights. Another obstacle, and it meant that Andrew had to digitally color the doctor’s hair in each of the wig scenes to match her original hair color.

Real hair on the left, digitally colored wig on the right.

And speaking of extra work, did I mention the ADR? That’s filmmaker-talk for re-recording dialog in a sound studio because it didn’t come out clean during the initial shoot. They had already recorded ADR after the first two shoots, but the pick-up footage not only had new scenes but slightly different dialogue in some of the previous scenes, as well. So they had to record new versions of some lines they’d already recorded.

Also appearing in this film was CLINTON RIDDLE, who played the Romulan Derka, an exiled Tal Shi’ar leader. Randy discussed how Clinton came to be involved with Potemkin in my previous blog about the Starship Webster release “BOTTLES OF ALE“…

Clinton Riddle attended a workday for the Studio, and we invited him to come play a Klingon for Qab’elth. Because of his stature, I placed him at Comm, and he only had a couple of lines, but they were very impressive. We invited him back to play the Colonial Adjutant for Webster‘s “Bottles of Ale,” where he improvised a few lines. Again, he was so impressive, we brought him in to play the Romulan general in Caliborn‘s “Death Sentence,” which was a tour de force for him. Based on those three performances, we offered him the role as Webster‘s captain, and he accepted. He will make his appearance in the next Webster film, “Exiled from Eternity,” in which he plays Captain Richard Lattimer.

Randy mentioned to me that the vest Derka wore in “Death Sentence” was used by Sarat, the villainous Vulcan from “The Night the Stars Fell from the Sky,” more than eight years ago…so that vest has been around quite a while!

And finally, Randy pointed out that actor TERRELL MANASCO, who played Captain Serrek of the Science Ship Irinya, was actually reprising his earlier role as Science Officer Serrek from the Starship Endeavour. Interestingly enough, Randy had Terrell film his own scenes (he had directed some of the films shot in Birmingham), and Randy had him shoot his green screen footage from both the front and from the back in case Randy decided to do a reverse angle shot. When Randy composited Terrell onto a bridge background, it looked pretty empty, as there was no one else on the bridge except the Vulcan captain. So Randy decided to take the reverse angle footage of Terrell and digitally add the “backs” of two additional Vulcans manning stations behind the Captain Serrek. So Terrell is technically playing three Vulcans simultaneously on screen! 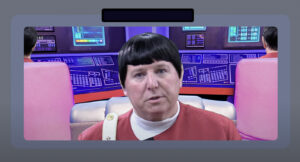 Terrell also directed a Romulan sequence in the upcoming STARSHIP DEIMOS film, “REFUGEE,” and will be directing and producing the forthcoming STARSHIP TRISTAN film, “SEEING IN THE DARK” which is shooting in Jasper, Alabama at the end of October. Potemkin is releasing “Refugee“tomorrow (Saturday) night, meaning that I will be once again behind the eight ball in covering these guys! However, Randy has always said that their goal is to release, on average, one fan film every month or so. And according to Randy, now that the worst of COVID seems to be behind us, Potemkin is just about back on schedule!