Okay, now that you guys have stepped up to help fund the Avalon Universefan film “Demons,” as well as Neutral Zone Studios and Ares Studios…guess what? Yep, another fan project needs your help!

This time, it’s a very unique production from a very unique fan. LARRY FLEMING has been working in the world of Star Trek fan films for nearly a decade, having begun back in 2010 with an early episode of the long-running fan series Star Trek: Natures Hunger. Since then, he’s produced, done set decoration for, done stunts for, and acted in numerous fan productions including Starship Farragut, Trek Isolation, Exeter Trek, Starship Republic, Minard, Dreadnought Dominion, Melbourne, and various releases from Potemkin Pictures. Now it’s time for Larry to write, direct, produce, and star in his own fan film!

What’s so unique about his latest project, TO HAVE BOLDLY GONE? Glad you asked. While many details remain unknown, the general plot-line appears to merge our own Trekker/Trekkie fan reality with the universe of Star Trek in a new and creative way. The following is from his current Indiegogo campaign page:

Prepare to go where no fan production has gone before!

Fan films are dreams come true, wish-fulfillment fantasies realized through the miracle of video production.  But what if it all happened for REAL? What if you were suddenly on board the USS Enterprise and Captain Kirk and his crew needed YOUR help?  Would you know what to do? After all, you’re the ultimate Trekkie, right? But this isn’t just a show anymore, and those Klingons are really shooting at you!

Meet Peter Warren, a “get-a-life” Star Trek fanatic who wakes up on the bridge of the USS Enterprise in his Captain Kirk pajamas…only to discover the ship is empty, the crew displaced in time, and an unstoppable foe from the future has a plan that is futile to resist.  Can a Trekkie in his pajamas possibly save the Federation all by himself?

Cross the threshold between reality and fantasy as the two become one in the upcoming fan film “To Have Boldly Gone.”  With your generous donations, you can help turn this fantasy into a wonderful reality for fans everywhere to watch and enjoy!

Sounds pretty cool, huh? Well, that’s only half the story. Y’see, the fan behind this film have been a Savior on The Walking Dead and will appear in Avengers: Endgame (if they don’t cut his scene). In fact, he’s been in numerous movies and TV shows, but his true love is fan films.

JONATHAN – So, Larry, I’m definitely intrigued by your fan film concept, but I’m also intrigued by you. There aren’t a lot of folks writing and directing fan films who are also appearing on television and in movies! So where might we have seen you?

LARRY – I get featured work as a background actor in a bunch of things. I work on The Resident, MacGyver, Legacies, Dynasty (the new one) and many others. I should be in the new Avengers if they don’t cut my scene. I was in The Walking Dead as a savior until they killed me. Oh, and I have had Robert Downey Jr. tell me to cut my beard off in Captain America: Civil War.

JONATHAN – Hmmmm, from the photos above, I can see why RDJ wasn’t thrilled with your beard! And that’s you holding the machine gun behind Simon on The Walking Dead?

LARRY – Yep. I’m the one further back.

JONATHAN – That’s really cool. So have you been involved with Hollywood productions for a long time, or is this more of a recent development?

LARRY – Yes to both.

JONATHAN – Could you explain that?

LARRY – My dad was a processional baseball player; he played for the Boston Red Sox and the Chicago Cubs from 1939-1946.  I grew up in and around Hollywood. My dad was a celebrity in his own right, and we met a lot of other celebrities because of that. In fact, I’m only impressed by talent to this day…not simply fame. While I liked the film industry, I hated the way it operated. That’s why I didn’t go that way with a career.

JONATHAN – What did you do instead?

LARRY – I am ex-Navy; in fact, I’m a Vietnam vet. When I got out, I went to work in Silicon Valley. I have 40 years in aerospace and computer design and management.

JONATHAN – So how did you wind up back in Hollywood…or rather, Georgia (since I know that most of the industry work you do is in the Peach State)?

LARRY – When I was planning on retirement, I wanted something else to do—so I started producing. I would put myself in my films, like Hitchcock did, and began to like it on the other side of the camera. As a producer, I tried to treat people right…and not like what I saw growing up.

This fan film business is a pastime for most, but for me, it’s a passion! I’m old enough that I watched Star Trek first run. When I found out that there were fan films here in Georgia, I jumped at the chance to be a part of them. My first acting in a fan film was with the Farragut people in Kingsland. I also work with Randy Landers in Birmingham, AL; William Searcy in Albany, GA; and I was part of Melbourne in Oklahoma before it moved. I work on Dreadnought Dominion, and I knew Ray Tesi from the Republic group. It’s a small world!

Today, I’m fully retired, which means I work harder…but at things I like. I act whenever I can, I do featured background work in major films and TV. I sometimes run the camera and direct, but I prefer to act now. I have turned down joining the union because I want to do independent/fan films. I also cosplay during the convention season, up through DragonCon. 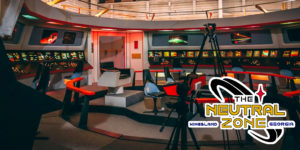 JONATHAN – Well, that sure sounds like an active retirement! So let’s shift our focus to the Indiegogo. With 36 days left, you’re at $1,094 from 15 backers—about 27% to your goal—which is pretty impressive!

JONATHAN – So when do you plan to film?

JONATHAN – Of this year?

LARRY – Yes. We’re on the schedule at Neutral Zone Studios.

JONATHAN – But that’ll be two weeks BEFORE your campaign ends. What if you don’t hit your goal?

LARRY – Actually, I was prepared to film without the fundraiser. I wrote this one, I can direct. I have all the necessary camera equipment, so I can be DP. I know how to edit…you get the point. I knew the cost before I booked my film date, so no last-minute problems like we have seen. Lord willing, there won’t be an earthquake, hurricane, etc. to prevent me from filming.

JONATHAN – If you could havre filmed without the crowd-funding campaign, then why have one at all?

LARRY – The funds are to help take the load off and bring in other talent. I already have basic FX, but would like more. I would like to hire more help, but I’m prepared to do everything. Samuel Cockings is also doing the exterior shots. The more funds, the better the shots.

JONATHAN – So you’ll have enough to afford the $300/day cost to film at Neutral Zone Studios?

LARRY – The $300-a-day is actually less than I was planning. I am an experienced independent filmmaker. I also ran a few corporations. I know business. These “God love ’em” fans just want to create a world of Star Trek. I plan on one day to film, but I’ve reserved two for safety.

JONATHAN – Speaking of Neutral Zone Studios, do you have any thoughts on the recent controversy involving fan films using the studios and the implementation of new fees instead of requested donations? After all, it looks like yours will be the first production to film there since the whole tempest happened and the new policies were put in place.

LARRY – I find that the trouble with fan films and the Neutral Zone is often a result of growing pains. Asking for a “donation” from someone who is used to filming for next-to-nothing is never going to happen. The line between cost and profit can be blurry. Star Trek Continues went non-profit 501(c) to help, and they were still told to stop. It’s a new world under the watchful eye of CBS and the guidelines. Ray Tesi has tried to comply to the point of not asking for money outright, and that is the main hurtle going forward. I wish CBS would create a fan film division and put some real fans on the board. That’s not going to happen, but I wish.

JONATHAN – Yeah, it’s pretty pretty unlikely. But who knows? In the meantime, I wish you the best of luck with your crowd-funding, Larry, and I look forward to seeing To Have Boldly Gone.

And for folks wanting to donate (or at least pass around the link), here you go…