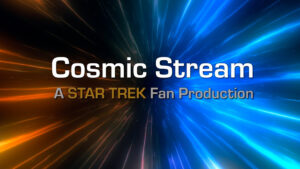 The AVALON UNIVERSE isn’t the Prime Star Trek universe, and it’s not the Kelvin timeline either. It’s not the Mirror universe or the Axanar universe or any other Star Trek or Marvel or DC or sci-fi universe you’ve ever seen before…unless, of course, you’ve watched the previous six Avalon fan films releases.

Instead, the Avalon Universe is simply a place where show-runner JOSHUA IRWIN (from Fayetteville, Arkansas) can play around with Star Trek stories without worrying about tripping over existing canon or angering this or that Trekkie because such-and-such never happened or this-or-that did happen so what you’ve just shown us doesn’t work. It works in the Avalon Universe, and that’s all you need to know.

The Avalon fan series got its start on Halloween 2018 with the release of the creepily comedic (or was that comedically creepy?) GHOST SHIP, which can best be described as “Star Trek meets The Walking Dead.” It was fun and surprisingly professional-looking. The reason for the latter is because Josh and many members of his team do actually work in the film industry and know how to shoot a proper film…fan or otherwise.

Ghost Ship introduced the new crew of the recently-repaired U.S.S. Excalibur, including VICTORIA FOX as First Officer Amanda Beck, VICTORIA ARCHER as Engineer Jamie Archer (yep, same last name as the character), and TYLER DUNIVAN as Captain Derek Mason. But no sooner had Mason been introduced than we saw the character die a noble death in the second Avalon episode AVALON LOST.

The third Avalon episode, DEMONS, released a year after Ghost Ship and eight months after Avalon Lost, showed fans how Commander Beck and new commanding officer, Captain Lance Ramirez (played by  CHUCK MERÉ) dealt with the loss of their close friend and colleague. LEGACY and NEW ORDERS were both short vignettes, while AIR AND DARKNESS was an ambitious full-length episode with night shots, stunts, great VFX, and lots of Klingons!

Earlier this month, “Team Avalon” launched a brand new GoFundMe campaign trying to raise $20K to continue their saga, hoping to finance as much of their next multi-episode chapter “Crisis on Infinite Excaliburs” as possible. Barely a week and a half in, the campaign is doing strongly with 55 backers and nearly $3K in donations so far—about 15% of the way to their goal. But more support is sorely needed to generate the remaining 85%, so please consider making a donation, even if it’s a small one, by clicking here…

While the team waits for more backers, they have been doing anything BUT resting on their laurels! In fact, Josh has already released a number of interviews with the team and other special features, and today they’ve just premiered their seventh fan film, COSMIS STREAM. Take a look…

Is that Tyler Dunivan’s character of Derek Mason, back from the dead??? Or is he in heaven, purgatory, another universe, another dimension, or is it just a dream? Fortunately, I was able to interview both Tyler and Josh and discover the answer.

Before we get to get interview, however, I’d like to point out something very unique about Cosmic Stream. This is the first time any Star Trek fan film was shot at THREE different fan run studios featuring TOS-era standing sets. Prior to the first Avalon release, there used to be three locations in the United States that had constructed replicas of some or most of the TOS sets from the 1960s that were used for fan films: James Cawley’s RETRO STUDIOS in upstate New York, the sets in Kingsland, GA being used (at the time) for STARSHIP FARRAGUT and STAR TREK CONTINUES, and STARBASE STUDIOS in Oklahoma City. And while a small number fan projects had made use of two of those three studios for a single release, no production that I am aware of used all three.

Ultimately, James Cawley converted his TOS sets into an officially licensed Star Trek Set Tour in 2016, the same year that Starbase Studios lost their rent-free facility in OKC. They briefly moved to neighboring state Arkansas, but ultimately had to shut down. And after Star Trek Continues wrapped up its eleven-episode run in late 2017, those sets were sold to RAY TESI and renamed NEUTRAL ZONE STUDIOS, eventually being opened up to any fan production wishing to used them.

In the meantime, GLEN WOLFE and DAN REYNOLDS constructed their own TOS set replicas in northeastern Arkansas and dubbed them WARP 66 STUDIOS. (WARP stands from Wolfe and Reynolds Productions, and 66 refers to the year that Star Trek first debuted.) Those sets were used primarily for episodes of THE FEDERATION FILES anthology series, but Glen and Dan were happy to let other fan filmmakers rent out their sets. And finally, ALEC PETERS and his AXANAR team completed work on their U.S.S. Ares bridge set in Lawrenceville, GA and opened that up to other fan filmmakers, as well.

By the time Avalon came onto the scene in late 2018, there were again three facilities with TOS-era sets available for fan filmmakers. And indeed, Ghost Ship made use of both Neutral Zone Studios as well as WARP 66. After that, however, Avalon kept things primarily in Arkansas, sticking exclusively with WARP 66…until now. Cosmic Stream features scenes shot in February 2021 at both WARP 66 and Neutral Zone but ALSO a short scene of Alec Peters as Admiral Garth that was filmed at ARES STUDIOS in Lawrenceville.

And that makes Cosmic Stream the first-ever fan film to feature footage shot at three different facilities all featuring professional quality TOS-era set replicas (even though the Ares bridge is technically slightly pre-TOS-era).

One last bit of behind-the-scenes trivia: Victoria Archer (the actress playing the chief engineer in Cosmic Stream) was actually eight-and-a-half months pregnant(!!!) when her scenes were filmed. Have fun rewatching to see how she was filmed only from the torso upward. Also, two actors named Peters, Alec and and Aaron, play characters in this film. They’re not related.

And now, folks, get yourselves ready for a really awesome interview, my second-ever video interview made using Zoom. It got unexpectedly personal, and I thank both Tyler and Josh for opening up and discussing some very difficult topics. You’ll see what I’m talking about below…

And once again, here’s the link if you’d like to donate to their GoFundMe campaign…