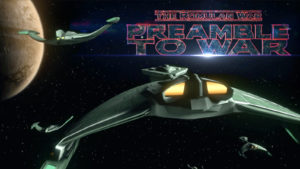 Now, you might think I’m talking about the new Star Trek: Picard series (which features Romulans quite prominently), but I’m not. Instead of looking forward into Star Trek‘s future, I’m referring to an eagerly-anticipated fan film that looks BACK into Star Trek‘s past.

It’s a past that we frustratingly did NOT get to see when Star Trek: Enterprise was canceled after only four seasons. Fans were deprived of what promised to be an exciting season five that would have shown the preamble to the Romulan War with Earth and the Coalition of Planets…a war that would inevitably lead to the founding of the United Federation of Planets.

But now, thanks to fan filmmaker MARK NACCARATO, fans will finally get to see one Trekker’s vision of how that interplanetary war transpired. Sure, it’s not canon (no fan film ever is), but his production THE ROMULAN WAR will still be lovingly and meticulously crafted, with trained actors and jaw-dropping CGI effects by the “star witness of the stars,” SAMUEL COCKINGS.

Already, Mark has released a series of “enhanced” audio dramas where voice-over recordings of personal logs and correspondences, read aloud by accomplished actors (and also by yours truly), are augmented by images and animations. This series of poignant vignettes, titled WAR STORIES, recount emotional experiences during The Romulan War from the point of view of an admiral, a foot soldier, an engineer test pilot (me!), and a freighter jockey. If you haven’t listened to them yet, click here. They are a MUST SEE (well a MUST HEAR)!

In the meantime, as we await the big premiere of The Romulan War fan film (told in the same “mockumentary” style as Prelude to Axanar), Mark has given fans one last tantalizing peek at the upcoming story. Titled PREAMBLE TO WAR, this vignette is also told in that same mock documentary format and features two of the characters who will appear in the final fan film…along with some awesome VFX, wonderful editing, and a really cool original music soundtrack composed by ANDREW CURRIER.

The five-and-a-half-minute mini-fan film does feature about 90 seconds of ultra-short clips and stills from various Star Trek: Enterprise episodes, which is a fan film guideline “no-no.” However, with only 1,170 views so far, and with the new Star Trek Picard series premiering in less than two months, will the newly-merged ViacomCBS even bother with such a minor infraction and risk the fan backlash? Probably not…at least, I hope not, as this is a very nice addition to the hundreds (thousands, actually!) of Star Trek fan films out there.