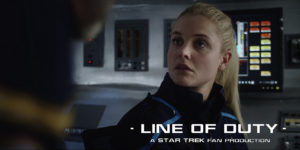 When the fan film guidelines set a 15-minute limit on the runtime of Star Trek fan films, many in the community shouted, “It can’t be done!”

AARON VANDERFLEY in Australia apparently didn’t get the memo because six months earlier, he’d already released an amazingly powerful 6-minute fan film called NEEDS OF THE MANY with strong acting, impressive sets, and spot-on uniforms from the NX-era of Star Trek. Aaron was already a professional freelance filmmaker and wanted to try his hand at Trek fan films. This was only his first effort, but there was a LOT more to come!

In mid 2017, Aaron did it all over again, this time with the 12-minute THE DERELICT, an intensely dark and haunting horror/thriller (very unique for a Star Trek fan film). Again, the acting was top-notch, the uniforms amazing, and now there was even action, suspense, and a few stunts thrown in. It really felt like part of an episode of Star Trek: Enterprise.

By the begining of 2018, Aaron treated fans to a third superbly-crafted NX-era film, GOOD MEN, this one only 9 minutes long. Time limit? What time limit!

Finally, last summer, Aaron flirted just 30 seconds shy of that 15-minute runtime with his most ambitious release so far, THE FALL OF STARBASE ONE. Taken as a whole, the four fan films appeared to be mostly unrelated to each other beyond their time period, which seemed to take place during the Romulan War with Earth and the Coalition of Planets.

But then I watched Aaron’s fifth and final (or so he says) Star Trek fan film and noticed that not everything was as unrelated as it seemed. More on that in a moment during my interview with him. But first, take a look at Aaron’s latest Star Trek triumph: the very unique and masterfully-produced LINE OF DUTY (finally cracking the 15-minute mark as a 20-minute two-parter)…

Below is what will, sadly, be my final interview with Aaron Vanderkley (unless he changes his mind about this being his last Star Trek fan film). If you want to read more interviews with Aaron, I’ve done two previous ones which you are welcome to check out here.

And now, let’s hear what Aaron has to say about Line of Duty… 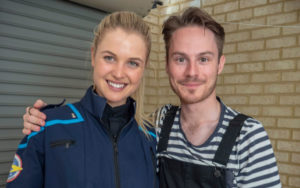 JONATHAN – Is this REALLY your last Star Trek fan film, Aaron? Say it ain’t so! They are all so AWESOME!

AARON – I’m afraid that Line of Duty is the final film in our series. Who knows if there will be more on the horizon, but for the near future, this is it.

JONATHAN – Well, I can honestly say that I’m gonna miss seeing new NX-era fan films from you, my friend!

AARON – I’m gonna miss making the films and being able to talk about them with you.

JONATHAN – Okay, let’s wipe away the tears. This is a moment for celebrating five amazing fan films in three and a half years. And speaking of that, I noticed a couple of little “blink-and-you’ll-miss-’em” Easter egg call-outs to at least two of your other fan films—Needs of the Many and The Fall of Starbase One.  Were there any nods to your other two fan films anywhere?  If so, where?

AARON – Well spotted! As this film takes place over the course of a year with the events of the previous films happening in the background, I wanted to include “kisses to the past” to all the films but also wanted to make sure that they weren’t vital to the overall story.

From Needs of the Many, NX-06 Endeavour is the ship which the character of Charlie (played by Will Leach) gets transferred to and is later killed on board…during the minefield disaster. Among the survivors is Ben, played by myself. 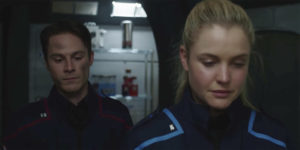 From The Derelict, NX-03 Challenger is the hero ship in this latest story and among its crew is Fletcher (played by Jessica Niven) and O’Dell (voiced by Zach Clifford). 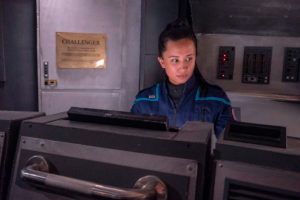 From Good Men, Tajor (played by Frank Humphreys) is a prisoner alongside our hero Ensign Wallace (played by Juliet Godwin) and Charlie. The prison is potentially on the same planet Tajor was operating on in Good Men—which was intended to be Rigel X. 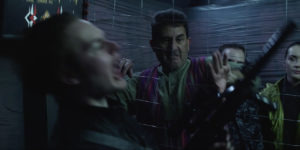 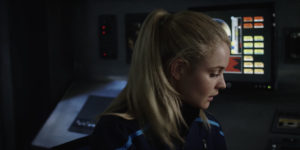 A message coming in from Starbase One is suddenly cut off.

JONATHAN – Did you always intend to have this be a “tying the other films together” fan film, or was that just something you decided to do later on, long after the other films were completed?

All I knew for this film was that I wanted Jess to come back as Fletcher. The rest either happened naturally during the scripting process as fun little cameos, or in the case of Frank making an appearance as Tajor, he just saw my casting call for extras and asked if he could be involved again.

JONATHAN – That’s really cool. It’s always a good sign when your actors want to come back and work with you again. 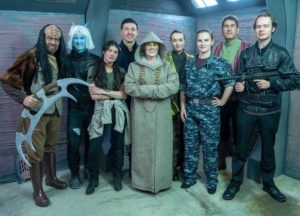 AARON – It is a wonderful feeling. I am pretty confident in saying that I think people have fun on these projects. For an actor, it’s not your everyday short film project that involves ‘kitchen sink drama.’ I don’t think any of them really know what to expect or how we will pull it off. They arrive at an unassuming house and then suddenly step foot into the corridor of a spaceship. It’s about as far away from reality as one could get as an emerging actor, and it is something different to put on a showreel. I think they also see that someone has actually put a lot of effort into making this short film happen, so it helps them bring their A-game and give the best performance they can. 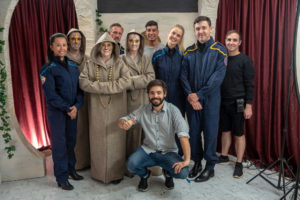 Most people I work with have either heard of Star Trek or seen a JJ movie or two, but I don’t believe you have to know Star Trek through and through to be in it. Actors are inquisitive creatures, and what the canon of Star Trek does help with is establishing background or context for them, especially working on a short film where there just isn’t time. Outside of that, there is no requirement to do homework. I’m always looking for actors with experience and natural ability to fit the roles I need to fill to tell the story. 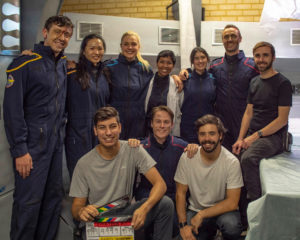 JONATHAN – So in relation to your other films, when was this latest script first conceived and written?

AARON – I actually wrote the end to Line of Duty in August 2017 (about the same time as The Derelict), and it is quite heavily inspired by the Federation: The First 150 Yearsbook. There were two things I knew I wanted to get out of the last script: firstly, that it would feature at least one scene set on the bridge, and secondly, that it would be told as a “story of my life” piece—flashing back to various adventures which resonated with the lead character. 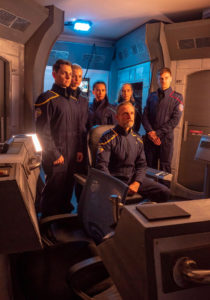 Aaron built an NX-era bridge for “LINE OF DUTY.”

The first notes I have on the overall story are from July 2018, which originally had it open with Wallace inside an adrift Shuttlepod, recording a message to Starfleet. In the closing moments, when she lost all hope, Enterprise appeared to save her and the film ended there.

The first full draft was written in December 2018 and went through three revisions before being locked off shortly after the read-through. Once I got to hear it performed aloud, I made some changes to better suit the actors playing the roles.

JONATHAN – This was obviously a much more ambitious film to make—with multiple set configurations and some on-location shoots.  How long did pre-production, production, and post-production each take? Which aspect was the most challenging and time-consuming?

AARON – I think I always wanted to make sure that each film was slightly more ambitious than the previous one. There was a lot to do in this film. We had 22 actors, six sets, two locations, 30 costumes, 23 pages of script, minimal crew, and five shooting days to get it all done.

JONATHAN – Wow…that’s a lot for any fan film!

AARON – The pre-production process started in December 2018, which involved myself writing and re-writing, as well as casting, building sets, and organising the costume bits and pieces. We started shooting in April 2019 and, barring a week’s break, we shot one day a week for over a month, into early May with no hiccups along the way.

JONATHAN – Nothing went wrong at all? Nothing???

Next week in Part 2, we’ll learn if nothing did, in fact, go wrong. Then we’ll take a closer look at that ambitious bat’leth battle sequence, discuss what Aaron has learned from making these five fan films, and find out if there’s anything now that he wishes he’d done differently then. And finally, now that Aaron is finished making Star Trek fan films, what’s going to happen to those awesome NX-era sets and costumes?