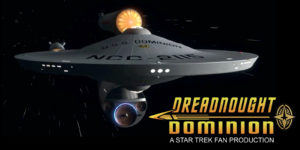 Back in 2015, DREADNOUGHT DOMINION released its first two episodes (“Haunted” and “Anchors Aweigh“). Those two episodes set up the backstory of the main characters as the USS Dominion prepared to launch. But then the show-runner and lead actor, FRANK PAREKR, JR. (playing Commodore Samuel Grissom) left the series, leaving GARY DAVIS and RANDY WREEN to pick up the pieces and move on.

The following summer, a Mirror Universe version of the same episode, this one titled “Command and Conquer,” showed the same scenes taking place in the Terran Empire. It was a fun little project, and both fan films featured MICHAEL L. KING from Starship Valiant and VANCE MAJOR playing his fan favorite character of Erick Minard.

Last summer Gary and Randy released two back-to-back vignettes, both filmed at NEUTRAL ZONE STUDIOS in Kingsland, GA: “Reality Check” (which purposefully broke the fourth wall in a tongue-in-cheek way) and “Silent Acknowledgement” (featuring the first deaf character and actress in a fan series). You can read a great two-part interview with Gary and Randy here.

And yet, after six complete fan films, Dominion was still in drydock!

Acknowledging the ridiculousness of the situation, Gary and Randy created one final script to get them on their way: “Technical Difficulties.” Also tongue-in-cheek, they finally got the starship launched and promised their next episode would be a serious one.

That episode was just released this past Saturday. Check it out…

Gary and Randy are great guys and truly dedicated to the essence of what a Star Trek fan film should be: fun, dedication, hard work, and a desire to share their stories with fellow fans. I’d been wanting to do an audio interview with them, and this seemed like the perfect excuse. So take a listen to a fun and funny interview with two gentlemen whom you are going to want to get to know better…

Dreadnought Dominion‘s last crowd-funding campaign feel short of its goal. But now, with the impressive “Redemption at Red Medusa” showing what they can do, Gary and Randy have launched a new GoFundMe for their next TWO episodes with a $3,000 goal. If you’d like to help them out, click on the link below…