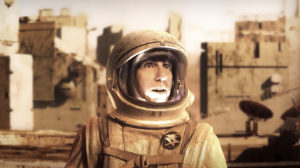 I love interviewing MARC ZICREE (“Mr. Sci-Fi”) a.k.a. Marc Zicree of SPACE COMMAND. He always has a LOT of very interesting things to say, and he says it all with such enthusiasm and excitement. In fact, I usually have to listen to Marc’s interviews a second time to fully process everything!

Today’s interview is actually the fourth I’ve done with Marc over the past three years, and the first wasn’t even about his current passion project Space Command. Along with writing more than a thousand television scripts, Marc also wrote, directed and produced the Star Trek: New Voyages episode “World Enough and Time,” which featured GEORGE TAKEI as a guest star and remains one of the finest Star Trek fan films ever made. (Here’s my interview with Marc about that production.)

Crowd-funding for Redemption began way back in 2012 with $221,000 raised from nearly 3,000 backers. Subsequent crowd-funders and sales of investment shares increased that total to over a million dollars! Last summer, after more than six years, the first half hour of the pilot was finally released. You can view it below…

In February of this year, Marc released the full first hour of the pilot, with improvements to the initial half hour included. It’s actually interesting to compare the two versions, so I’m posting both if you’re interested in watching side-by-side…

With the last hour of “Redemption” currently in post-production and scheduled for release later on this year (hopefully!), Marc just announced a new Kickstarter campaign for the second 2-hour episode, “Forgiveness,” which already has 40 minutes of live action filmed. The campaign quickly exploded past its $35K goal and is currently hovering at around $70K as I write this…with 10 days left to go.

When I first published a blog spotlighting the new campaign two weeks ago, some fans were dubious. If it’s been seven years and episode one isn’t done yet, why start funding episode two? Why not finish one full episode before starting on another?

So for this interview, and with Marc’s permission, I hit him with that tough question…along with a several others. Among the things I wanted to know were what actually happens during all of those meetings he has with executives from Netflix and Amazon and ABC? What if one of those networks wants to give him $50 million but demands he throw out everything he’s done and start over with a decent budget? And finally, with all of these projects Marc is developing and pitching right now, how do donors know he’s spending enough time on Space Command itself?

Listen to his eye-opening answers below…

And of course, there’s still time to donate: