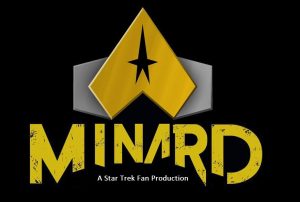 Back in September, I reported on how VANCE MAJOR (whom I affectionately refer to as the “Where’s Waldo of Star Trek Fan Films”) had released SEVEN Trek fan films in just SEVEN DAYS.

And now Vance has done it again!

This time, Vance wasn’t quite as prolific, but he did manage to debut SIX fan films in less than 30 days, from November 3 to December 1.  All of the films continue to saga of Erick Minard, chief engineer of the Starship Valiant and the captain of the USS Constar nearly a century later.  How is Minard alive to serve under Captain Christopher Pike and still around in the 24th century to fight the Borg and talk to Lt. Commander Data and Dr. Crusher?  The only way to find out is to watch the episodes as they are released.

Some fans have criticized the production quality (or the lack thereof), and even Vance himself acknowledges the low-budget look of the finished product.  The uniforms often don’t always fit properly, the spoken lines in outdoor scenes can be overwhelmed by a mild gust of wind, and certain characters look like they could use a few extra workouts on the ship’s treadmill.  (I’m one to talk!)  Even Vance’s own production company vanity plate at the end acknowledges, “I’m the guy with a cord in the doorway” (a glitch which actually happened about 50 seconds into this fan film). 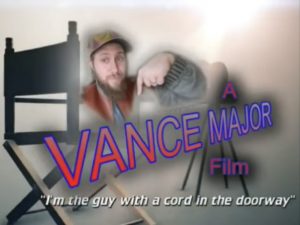 But those who criticize Vance’s work, in my opinion, aren’t getting what fan films are all about.  Not everyone can make a Star Trek Continues, Renegades, or Prelude to Axanar.  And they don’t have to!  Fan films are the great equalizer.  We all create our projects to the best of our abilities and our budgets.  Even the worst fan film still requires a great deal of work—writing a script, pre-production prep, getting the actors together, directing scenes both technically and dramatically, VFX (if you have any), sound, music, editing—fan films don’t make themselves!  And if you don’t like the end result, then don’t watch.  Or watch anyway because most fan films these days (including Vance’s) are pretty short.

You can hear a wonderful interview that I did with Vance here (just scroll to the bottom of the blog entry).

You can also view all of the fan films featuring the character of Minard here on Vance’s YouTube Channel. 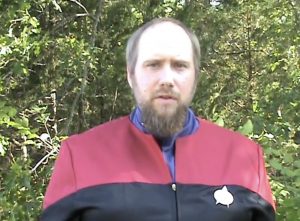 One of the greatest things about PROJECT DEFIANT: The Hill is pushing things as far as we could…really going for the scene, and I think it shows.  This is honestly a great and disturbing look into the Mirror Universe.

(Jonathan again) – For a look at the Mirror-Minard in previous appearances, check out PROJECT DEFIANT: Dark Glimmer and  Command and Conquer.  Then watch this…

STAND WITH ME takes place about 3 to 4 years after my fan film RESISTANCE.

We shot the fan film STAND WITH ME as probably the truest Star Trek fan film I’ve ever done…in my opinion, at least.  It’s probably my favorite, personally.

My character is in command of the Constar and in charge of the away mission.  I get to work with the talented Yaffah Lewis, which is tons of fun.  Also returning is my good friend Wanda Massingale.  Both of these were in Resistance, so we’re seeing these guys grow their characters.  Martin Bennett and Allex Collins join us as background characters, and I enjoyed giving the scene a tad touch of depth we usually don’t have…especially on location.  And man, it was a tricky location! 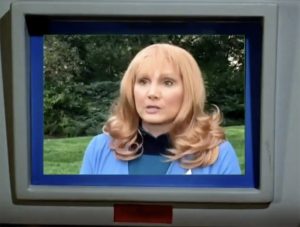 Then there’s Madison Spencer, who plays Dr. Beverly Crusher. She brought a charm to the role that I really enjoyed.  It honestly made me wish I wrote more for her!  She did a really good Beverly, and her after-credits part was something that I don’t think you’ll want to miss.

Then there is my highlight. Data was my favorite Next Generation character growing up.  I was so amazed at how fast he could put the isolinear chips back in “The Naked Now,” or that his brother Lore looked just like him and took out a powerful Klingon like Worf.  Data was really cool.  You couldn’t hurt him emotionally.  As a kid who moved around a lot and lost friends—and had trouble making new ones every couple of years—that was really appealing. But here we are, and Jeremy Horn was kind enough to let me act opposite one of my childhood heroes, Lt. Cmdr. Data. It’s such a great portrayal how he did it.  Seeing it come to life in my film brought me to tears.  If only that kid growing up could know he’d be doing this now, man, that’s what fan films are about!

Joining me on MR O’SULLIVAN’S BAKERY is Aimee Poage, who had this to say about the story: “To me, Mr. OSullivan’s Bakery is not only about a friendship of two people but also a form of a small family…of its two people coming together when times were tough and they needed someone the most, and they found each other to find comfort in everything that was going bad.”

One of my favorite captains is Christopher Pke. In the fan film CAGELESS, I bring that character in for a small part…but important in the life of Minard.  This was fun for me to do because I always saw Scott J. Smith as Captain Pike, and when he agreed to do it, I was really excited.

Working side by side with me again was Cordy, as another “Number One” for Captain Pike…as that seemed to be a good nickname for the first officers (“The Cage,” TNG, DSC).  I really wanted to give Cordy’s character some depth, as this is his fourth time shooting with me.  As a friend, I felt he earned it.

You’ll see a younger Minard in CAGELESS.  So far, this is as far back as I’ve gone in his life.  This film really set up a lot for what is personal with my character.

Remember the fan film NIGHTMARE? See how events unfolded in the fan film THE ANCIENT LIGHT.  Does what we do really have a positive impact on those around us?

Let me tell you what the Constar means to me.  The USS Constar was the ship I would play captain of as a kid…with my friends Erick Hublein and Jeremy Minard.  I would eventually use both of their names as nods for my character.

But I remember being so bored in school and hardly waiting to get out so I could go home and play with my Lego-build tricorder and phaser and go have another adventure.  I didn’t have a lot of friends growing up, but I did have an imagination.  And this ship was always part of my adventures.

When Michael L. King asked me to be engineer on the Starship Valiant in his fan series of the same name, I jumped at the chance…even getting to name my character after my childhood friends.

When I started to tell my own stories about the character, I decided to bring the Constar into continuity…and you guys seemed to enjoy it.  I wanted to set it apart, giving it the blue “JJ” warp nacelle colors and seeing that Constitution-class in the Next Generation era. This ship was something that, at a glance, stood out.

In CRYING WOLF, you’ll witness the fall of that ship…and in a sense, the end of an era.  It was very cool to share part of my childhood with you all, and I’m glad to make something so personal a regular thing in fan films. You guys have blessed me.

(Jonathan again) – You won’t have to wait long for more episodes in the Minard saga!

After that, Vance says, “Phase 4 of my fan films is definitely the most personal of all my phases. It takes you through the consequences of your actions…”  The planned released dates for the remaining six episodes are:

January 5th
WITHOUT REWARD – After the death of his wife Emily, Minard comes face to face with someone who understands his loss all to well.

January 12th
GEMINI – When a boy from the future comes to be known, Minard enlists his network to help him prevent the quadlithium from falling into the wrong hands.

January 19th
PERSONA – “Persona” means “the mask or façade presented to satisfy the demands of the situation or the environment and not representing the inner personality of the individual; the public personality.”  It is often used in plays and novels.

January 26th
CHANGE – On the eve of retaking Deep Space Nine from the Dominion forces, one distress call changes everything for Captain Minard.

February 2nd
FULL CIRCLE – After the loss of her mentor, a newly-promoted Captain Xing pays her final respects and finds her true destiny.

FEBRUARY 9th
THE BEST THINGS – Following an attack by the Sucullon, an orphaned boy changes the life of Minard forever.

The final episode is timed to coincide with the one-year birthday of Vance’s son, Royce, and will be a gift to him.  It will also mark Vance’s final bow from the world of Trek fan films after an amazing and productive run.

All of the above films (both those already released and still to come) can be viewed on Vance’s YouTube Channel.