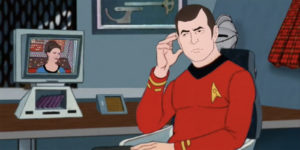 With the new animated Star Trek series LOWER DECKS set to premiere next week, now is a great time for fan films to revisit the original animated Trek series from the 1970s.

For those of you young ‘uns who don’t remember the 70s or aren’t familiar with the animated Star Trek series, it ran on Saturday mornings between 1973 and 1974 and featured 22 half-hour episodes starring all of the members of the original cast except for WALTER KOENIG (there were budget limitations, although Koenig did write one of the episodes). Episodes featured return appearances by Sarek and Amanda, Cyrano Jones, Harry Mudd, Bob Wesley, and Koloth. The series actually won an Emmy for Outstanding Entertainment in a Children’s Series…the first Emmy win for any Star Trek.

As far as fandom and canon go, the animated series (TAS) is a peculiar life form. TAS was the first time we ever learned that the “T” in James T. Kirk stands for Tiberius (which became official canon in Star Trek VI: The Undiscovered Country). Details of Vulcan from the animated episode “Yesteryear” made it into fourth season episodes of Star Trek: Enterprise. And many fans consider Robert April to be the first captain of the USS Enterprise NCC-1701 and Dr. McCoy’s daughter’s name to be Joanna…both revealed in TAS episodes. 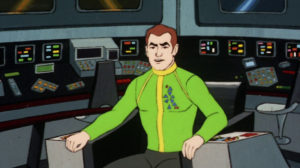 Robert April from the TAS episode “The Counter-Clock Incident”

On the other hand, some aspects of TAS seem to defy canon—like Enterprise crew members carrying security ID cards, life support belts (never seen before or since), NCC-1701 being the first ship with warp drive, an early holodeck nearly a century before the Enterprise-D, and an Enterprise “decoy” that could be inflated to a size twice that of the starship itself AND would fool a Romulan crew! But the show was still fun, and some of the episodes were quite good (others…not so much). And for Trekkies in the 1970s who hadn’t seen new Star Trek episodes since 1969, just hearing those familiar voices again was magical.

So it was for fans like CURT DANHAUSER and KAIL TESCAR. Each of these gentleman has created their own website dedicated to the animated series. Kail created Star Trek Animated while Curt created his Guide to Animated Star Trek. Both websites have existed for decades (and look like it), and both are labors of love by their creators.

Now, one might think that the two websites would have a lot of overlap, but instead, they feature very complementary content. Take a look at the main sections of both sites (Kail’s is the first, Curt’s second)… 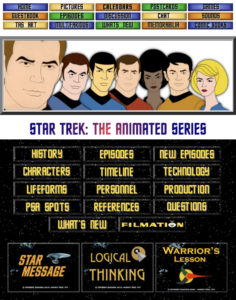 Kail’s has screen caps, fan artwork (including fan comics), sounds, games, and even calendars. Curt’s, on the other hand, has a ton of information about the characters, technology, timeline, and behind-the-scenes write-ups on the production itself. Both sites are veritable treasure troves! But the reason that Curt Danhauser is being featured in today’s blog is because he has just released a brand new, original animated Star Trek fan film—“The Quintain.”

Pretty awesome, right? This is actually Curt’s FOURTH original animated fan film. His first, the 7-minute “The Element of Surprise,” premiered back in July of 2008. A month and a half later, Curt released the first of three parts of a 30-minute fan film titled “And Let the Heavens Fall.” The other two parts debuted in April of 2009. And then, Curt’s most ambitious undertaking, the 66-minute “Ptolemy Wept” (featuring the character of Flint from TOS’s “Requiem for Methuselah”) came out in nine parts between 2011 and 2016. You can view all of Curt’s animated fan productions on this YouTube playlist.

(I should mention that Kail also helped produce a pair of original animated fan films back in 2009. Both featured the crew of the ongoing fan series STARSHIP FARRAGUT—along with the voices of Trek actors TIM RUSS and CHASE MASTERSON. You can watch the two episodes on this web page.)

Later on, Curt also produced a series of short public service announcements (PSAs) for Starfleet, “Warriors Lessons” for Klingons, and “Logic Lessons” with Mr. Spock (including this amusing one in the animated Mirror Universe). Many are really quite clever. 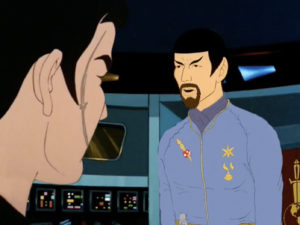 Curt’s latest 23-minute episode spotlights Scotty and premiered on July 9, 2020, timed to coincide with the year marking one century since actor JAMES DOOHAN was born and exactly 15 years to the month of his passing in 2005. This year also marks the 25th year since Curt Danhauser’s Guide to Animated Star Trek debuted on the Internet. (Kail Tescar’s site dates back to 1999.)

I’ve actually been wanting to interview Curt for a while now about his three previous releases. But now that he has a new fourth one, it seemed like the perfect time to have a chat about, well, as you’ll see, pretty much everything but the kitchen sink…!