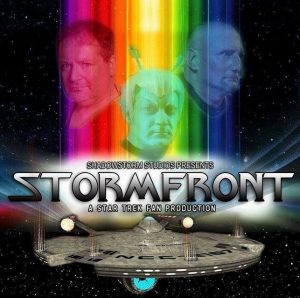 Last week, we took a closer look at the new fan series MELBOURNE, shot at STARBASE STUDIOS and produced by VANCE MAJOR OWEN.  This low-budget production has guest cameos from and shout-outs to SEVEN other fan films and series, tying a fair portion of the fan film community together with some shared continuity.

In Part 1 of our interview, Vance talked a bit about his own background as a fan and a filmmaker, and how his experiences with other fan productions led him to create his own.  In the conclusion, we discuss more about the Melbourne project itself—its cast, production and post-production, and plans for the future.

So let’s get right to it…

JONATHAN – What makes Melbourne unique and worth watching…and not just another TOS fan film? 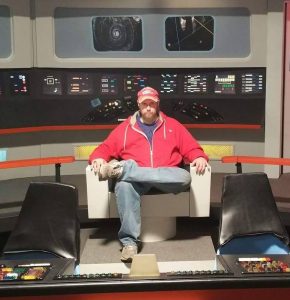 Vance Major Owen in the captain’s chair at Starbase Studios

VANCE – We spent three months just discussing the characters, the motivations, and where we saw them going. I think when you see them, you will realize that there’s more to them than in most fan films. We did discuss this with the actors in great depth a lot. They had a hand in some of the depth we went for. It was a very creative process, and I think that there’s so much you don’t see on screen, but you feel it. They feel very real. They all have motivations, even if you don’t get tons of time with them.  Again, you don’t always get that in fan films. We’re not better, we’re just different than some. Hopefully people will enjoy it. A lot of the characters will be relate-able…if not for yourself; you’ll recognize others in these characters.

JONATHAN – How did you find your cast and production team?

VANCE – Well, I have been in this for years, and before that I’ve been networking for years. I know people that know people. Gawd, that sounds like the mob!  [Laughs.]  But in all seriousness, it’s all in making connections and then putting in the best people who fit. A lot of trial and error. We did have several recasts, especially with the engineer (I think four). But the one we finally have, I honestly think is the best out of all of them…enough that I wrote Pen Pals to do with her. And she’s very dear to me. So you never know how things end up. You can’t stay married to an idea when you start off. You have to learn to adapt. 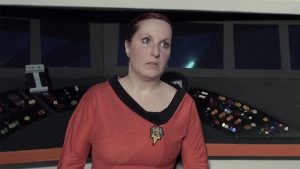 JONATHAN – How long did it take you to create your script, and how long did you spend shooting scenes?

VANCE – We were in pre-production for over a year and a half. Several people asked why we didn’t film earlier.  They had faith in Jeremy and me, but we honestly wanted to give ourselves the time to do it right…and I believe we did. Most fan films—and films in general—rush things because they just want to get something out.  And let’s be honest; it shows. We didn’t want to be that type of film. Watching this, it’s obvious that it’s a fan film.  No one is going to mistake us for the next big thing!  [Laughs.]  But we wanted to do the film justice, and we wanted to do the people who supported us justice. That’s so important.

JONATHAN – How long did you end up working on post-production?

VANCE – About 6 months or so. We were hoping only three months, but real life comes first. Because we’re all volunteers and none of us make money off of doing this, it sets ya back when real life problems or events comes up. It sucks, but that’s the nature of the beast.

JONATHAN – You also created a couple of short vignettes plus a commercial parody for Melbourne.  Please tell us a little bit about these mini-fan films.  Why did you decide to make them…and did you film them at the same time as your main fan film, or were they shot later?  Will there be any more? 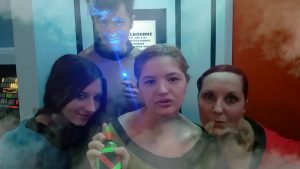 Some of the Melbourne cast has fun with the short parody vignette V’GER FOR WOMEN.

VANCE – Well, Pen Pals and Chain of Command were before Melbourne was shot. But V’Ger for Women and The Hunt, which are out, and V’ger for Men, which is not out, were all shot when we shot Melbourne. We had four days to shoot, but since we planned everything with the year and a half pre-production, it took us only three days.  So we did the shorts at the same time as Melbourne. We came in under budget, under time, and with more material than the actual film. All in all, we came out winners.

JONATHAN – Now that Starbase Studios has been moved even farther away from you (about eight hours drive one-way in Arkansas), do you plan to continue filming on those sets?  Is your cast and production crew willing to make the longer commute?

VANCE – Every one of my cast and crew drove and flew to Oklahoma…so to them, it’s just a matter of where it says on the end of the ticket. To me, that’s commitment, man. How can I not do the same?

But hell, I’m doing the same for Michael L. King for Starship Valiant, so yeah, to hell or high water. This life is one I choose. I was a big supporter of getting the sets to Arkansas.

JONATHAN – When do you anticipate starting up filming again?

VANCE – Our plan is September film again. Every September I will film a new Melbourne-related single-shot film.

JONATHAN – And when do you expect Part 2 of “Storm Front” to be released?

VANCE – Definitely this summer.  I’m just waiting on my special effects guy, Craig Fray, to finish up with our CGI.  Right now, he’s working hard on Valiant‘s next episode, “The Ties That Bind.”  As soon as he’s done with them, he shifts over to us. 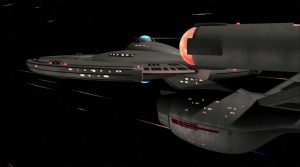 JONATHAN – I noticed that you recently launched a new crowd-funding campaign on GoFundMe.com with a $3,000 goal, which should be pretty manageable.  However, I also noticed that the name of your next episode is “Balance of Terror.”  Um, hasn’t that title already been used for a Star Trek TOS episode?  In fact, I think there was also an episode of Enterprise with the title “Storm Front.”  What gives?

VANCE – We’re doing a series of standalone fan films, each with a title that pays homage to Star Trek.  Some people have complained that we’re not being “original” because we’re re-using titles, but that’s a conscious decision I’ve made to honor the show brought us all here in the first place.

JONATHAN – Now that you’ve got your first 11-and-half-minute Part 1 episode done, the guidelines say you’ve got one more episode (Part 2) of no more than 15 minutes…and then you’re expected to be done.  However, your crowd-funding campaign says “Melbourne: Balance of Terror”…which kinda suggests it’s a continuing series, which Guideline #1 doesn’t allow.  Do you plan push the envelope on the fan film guidelines like Star Trek Continues is doing?

VANCE – I’m not sure what Vic has or has not discussed with John Van Citters at CBS. That’s not my call.

As for Melbourne, you won’t have to watch “Storm Front” to get what’s going on in “Balance of Terror.” It will be a completely stand alone film. And honestly, probably only one segment, not two. It’s not a two-parter. It will be completely self-contained. But if you watch the two together, great. You will see a definite over-arc theme. But you won’t need to see anything before or after…just like the rest of the shorts I’ve done. But they all compliment each other.

As for the guidelines, they’re guidelines, not rules.  We’re doing the best that we can to comply with as many of them as we possibly can.  And hopefully, CBS will appreciate that…if they even notice us at all.

The cast and production crew of MELBOURNE

I can only say that no one I’m working with is being dishonest, and we are all going forward in the best possible way we can…with as honest a heart as we can. None of the people I associate with have made money. In fact, we’ve froze our butts off in the studio, slept on the floor of a blood-stained carpet (don’t ask!), and had bounce fees from Little Caesars just so we could all eat.

If anyone ever says we are making money or trying to be famous, dude, that’s not this life! Usually, for me, it’s no sleep after a 60-hour work week, on a paycheck I can’t afford to go on but I manage to go anyway, living on adrenaline and coffee and other people’s body odor.  [Laughs.]

So, I doubt if anyone will ever be angry with any rule I bend if I accidentally bend one too far. As for others and what they are doing…? I seldom pay attention to others; I’m too busy doing me. I don’t have time to do them, too.

JONATHAN – When do you expect/hope to have your second episode completed?

VANCE – I’m not even focused on that at the moment, honestly. Hopefully quicker than it’s taken the first [laughs], but everything is always a learning experience. So I know it will be. Just like with the our pre-production on the first film, we can start on the things that set us back on this as soon as we’re done on the first.  So it won’t take as long.

JONATHAN – Well, I wish you and your crew the best of luck.  I can’t wait to see more Melbourne!