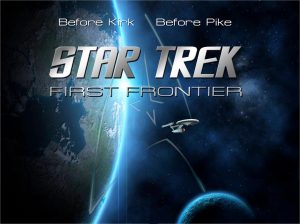 Last time, I began chatting with KENNY SMITH, the show-runner behind the eagerly-anticipated fan production STAR TREK: FIRST FRONTIER.  This exciting project will feature the first-ever commander of the USS Enterprise NCC-1701, Captain Robert April and his crew on their maiden voyage directly from dry dock.

Everything about this production looks amazing!  From the costumes to the sets to the 11-foot model of the USS Enterprise constructed specifically to create amazing-looking visual effects.

In Part 1, we learned how Kenny had become a convention promoter, working with most of the main cast members from the various Star Trek series, and also how he made connections with various people in the entertainment industry.  This led to finding a producer to help him bring his fan film script to life.

We continue this great interview by looking into some of the other exciting aspects of this fan film, the selection of cast and production crew members, and exploring why Kenny decided not to use donated crowd-funding to help produce this project… 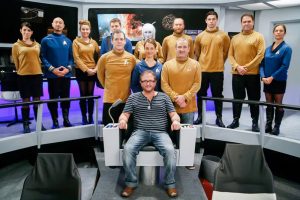 Kenny Smith in the center seat surrounded by the first crew of the USS Enterprise NCC-1701.

JONATHAN – I’m also psyched to see your practical (physical) sets.  Your bridge looks incredible.  What other sets did you build, and where did you build them?

KENNY – The sets were constructed in Atlanta.  Matt Green, who supervised construction of  the eleven foot model, also supervised the building of the sets.  He and Scott [Lyttle], as well as other amazing volunteers, constructed the bridge, the transporter room, two hallways, a conference room, an airlock, the admiral’s office, the captain’s quarters and sickbay…as well as designed an all new evil alien race, called the Sa’Ryn, and their starship interior.

JONATHAN – Holy moley!  That is a staggering number of sets to build for a fan film! 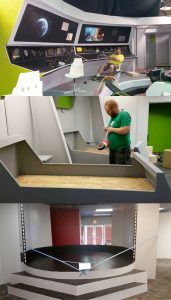 KENNY – The practical sets, I believe, made the difference. The actors were able to “feel” the ship around them, and it gave them an extra layer of reality to work with.

I originally had hoped to save some budget by renting the Star Trek Continues sets which were relatively close by in southern Georgia. That plan was dashed when I received an email from VIC MIGNOGNA, who plays Captain Kirk in that series, who basically let it be known that I wouldn’t be using those sets, as he had just purchased them. It was the most arrogant sounding letter…so proprietary. I saved that letter and used it as inspiration, then I built my own sets. I wouldn’t have been able to use theirs after all, because our design was an earlier one than theirs to fit Captain April’s era.

JONATHAN – Well, that is unfortunate about not being able to use the Star Trek Continues sets.  I know that John Sims’ Exeter Trek (not to be confused with Starship Exeter) was able to use the STC sets in slightly altered form for a Pike-era fan film (still unreleased).  But I seem to recall that several of the folks involved with Exeter Trek had helped out during the original construction of those sets when they were used solely for Starship Farragut. 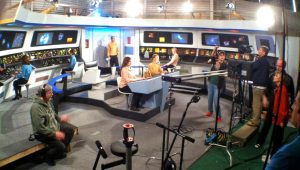 Anyway, it seems to have worked out well for you and your project, and you have amazing sets of your own, and I can’t wait to see how they turned out!

So let’s move onto your actors.  Most fan films use volunteers and fans to play the roles, and a few use local actors or at least folks with some acting experience and training.  And then there are the few productions that take it to the next level and hire professional Screen Actors Guild (SAG) actors…and that now includes Star Trek: First Frontier.  Can you discuss that decision and your choice of actors?

KENNY – While I enjoy the fan films that are being produced, my problem is often with the acting abilities. I know from directing that acting is a full time, difficult job.  And I noticed that most people who were making fan films were casting themselves as the captain. I chose to go the the Screen Actors Guild and cast appropriately real professionals who knew their craft and could give me the performances I needed to maintain verisimilitude in the film. We obtained all SAG permissions and held an extensive casting call, which brought to us most of our wonderful cast.

When it came to casting the father of Robert April, I saw an opportunity that many may have missed. I thought back to the films Halloween and Star Wars and decided that, with a mostly unknown (though talented) cast, I needed an anchor. I needed the wise, fatherly figure, and I needed him to be played by someone with a name…someone fans my age would recognize. In Halloween, it was Donald Pleasence and in Star War, Alec Guinness. I had met Barry Corbin, who played General Berringer in Wargames, at my One Tree Hill convention and asked him to play the role. He agreed instantly. He brought an “Andy Griffith” fatherly presence to the character of his son Robert, who is struggling in the story. 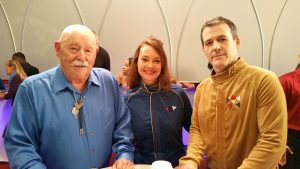 In the time since we shot the movie, I have seen my cast succeeding on other films, and I couldn’t be happier for them. Robert Pralgo who plays Robert April recently played Tom Hanks’ doctor in Sully and was in Fast and Furious 7. Paul Telfer was on The Vampire Diaries and has recently appeared on Days of Our Lives and Once Upon a Time. Mark Ashworth had a one-on-one scene with Denzel Washington in The Magnificent Seven as the preacher on the balcony. Mark plays Commander Young, our chief engineer, and has a beard in our film because he wasn’t allowed to cut it for filming on Magnificent Seven.  [Kenny laughs.] He will also be in the upcoming Marvel film Logan.

JONATHAN – That’s quite a cast!  I hope you gave them all nice, meaty character roles to play!

KENNY – I want to be clear that while our story is as true to Star Trek as I could possibly make it, it’s not a story based on technology. It’s based on the people. It’s the story of three main characters who are trying to find their place in the universe and the character arcs created for each. It’s a very touching story of love, friendship, sacrifice, and desperation. It’s also the first time that the idea of a married captain has been expanded on. The idea, if we ever went to series, of an episode down the line where Robert April has to send Sarah April into certain death to save the ship has intrigued me. How would he handle this as a Starfleet captain? Could he even do it? The aspect of their relationship is uncharted Star Trek territory for an Enterprise captain.

JONATHAN – Okay, switching gears to one of the aspects of your project that I personally find the most intriguing…

In late March of 2015, you began a Kickstarter campaign with a $130,000 goal. About six weeks later, with only $30,000 pledged, you canceled the Kickstarter and decided to self-fund instead. Why not just start up a new Kickstarter or Indiegogo campaign? After all, isn’t some money better than no money at all? 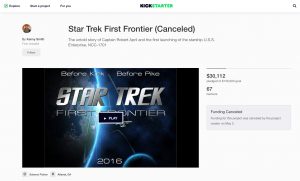 KENNY – My fiancée has asked me that very question no less than 100 times, since the movie drained our bank account to almost nothing. But she had faith in me, and I have faith in Star Trek, even with no hope for a financial return. The reasons for cancelling the Kickstarter were more than financial though.

First, I had nothing but words to show potential donors. I knew I could make the movie, but convincing others was difficult, and Kickstarter was starting to be flooded with other films and products to lure the dollars away from us. Secondly, the questions I was receiving were ones I didn’t want to answer, though they were questions that potential donors were entitled to. I was receiving questions like “What is the story about completely?” and “What are your filming locations?” I received emails saying someone would donate if I had Klingons and one man who wanted his daughter to have a starring role. In order to maintain 100% creative control, I knew Kickstarter wasn’t for me, nor was any crowd-funding. 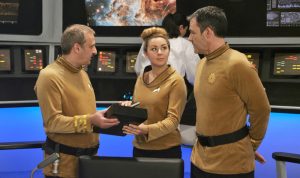 JONATHAN – So what happened after you canceled the Kickstarter?

KENNY – It was then that I decided to not even try another Kickstarter. Our One Tree Hill conventions had done very well, and with a loan from my mother, we had the budget we needed to self fund the entire project. The freedom this gave me was substantial. I was indebted to no one and able to tell the story I wanted to tell.

The one thing I had to sacrifice was the hiring of an orchestra to compose a new score. I simply couldn’t afford it. I had originally planned to contact James Horner to gauge interest in writing a new piece for the film. He died in his plane crash the month I planned to approach him. I ended up scoring using Star Treks II and III, and I am dedicating the film to James Horner. We obviously still have no hope for a financial return, but if, at the end of it all, if I was able to make a new Star Trek movie that gave me the same feelings I had when I was a kid, and share it with my fellow friends and fans who want to feel that feeling again, too, then it was worth all of it.

JONATHAN – So I’m sure folks are curious (I know I am!), if you funded this whole project yourself, Kenny, how much has it ended up costing you in total?

Next time, we find out if Kenny is willing to answer that question!  Also, we discuss production delays, the challenges of being a first-time director, and the biggest question of all: will Star Trek: First Frontier be complying with the fan film guidelines (well, it already has the words “Star Trek” in the title!)…and if not, why?

In the meantime, you can see LOTS more behind-the-scenes photos on the Star Trek: First Frontier Facebook page, and you can watch their newest official trailer below…