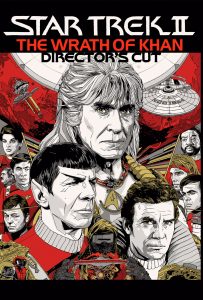 To mark this 51st anniversary of Star Trek and the upcoming theatrical release of the Director’s Cut of STAR TREK II: THE WRATH OF KHAN (in theaters September 10 and 13…get tickets here if you haven’t already), I’ve decided to feature a somewhat different kind of Trek fan film today.

Most fan films feature fan-written scripts with fan actors, fan-generated visual and sound effects, etc…some with small budgets and others with big budgets. But as far as I’m concerned, fan films don’t stop there!

Sometimes fans can show their innovation and cleverness by taking existing Star Trek footage from the five decades of countless episodes and 13 feature films, editing and manipulating it in new and creative ways.

One of the best examples I’ve seen of this recently is a fan-edited version of the trailer for Star Trek II: The Wrath of Khan. JONATHAN WORMAN is a talented video editor based in Toronto, Canada who has worked on commercials, music videos, shorts, and documentaries over the past eight years. Last summer, he released a brilliant “modern” version of a trailer for this beloved fan favorite feature film. Imagine if you had seen THIS trailer back in 1982…wouldn’t it have blown you away???

And as a fun comparison, here is the actual trailer that Paramount Studios released for the second Star Trek feature film…

UPDATE: In November, Jonathan Worman released a new modern trailer, this time for Star Trek: The Motion Picture!  Take a look at the finished product on this blog page…