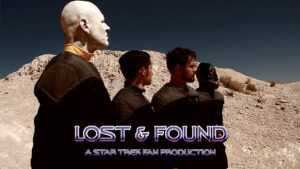 MATTHEW BLACKBURN isn’t as well known as many fan filmmakers. He doesn’t hang out on the various fan film Facebook groups, he doesn’t release dozens of fan films each year, he doesn’t do crowd-funders or shoot his films on elaborate sets or feature jaw-dropping VFX. He doesn’t cross over with other productions or do a lot of interviews (except with me). And he only ever posts something to Facebook when he’s completed a new fan film.

That said, Matthew has just released his fourth full-length (15-minute) Star Trek fan film in five years and his fifth overall. Matthews’s first fan film, STAR TREK: SURVIVOR, came out back in 2010 and featured the story of a marooned Starfleet officer (played by Matthew) who is nearly dead before being found by a marooned Vulcan agent on a secret mission for the Vulcan High Command. The film was produced by a total of four people, one of them being Matthew’s wife.

Matthew’s second fan film, SURVIVORS, came out seven years later (after the guidelines) and again featured a human and a Vulcan—played by the same actors—but this time they were the captain and his first officer. The production team had grown to six people for this 15-minute film, and I did a 2-part audio interview with Matthew, which you can listen to here if you’d like.

At the very end of 2018, Matthew released a third fan film titled LAST SURVIVOR, again made by just six people but this time featuring an initial landing party of four. The villain in this film was truly terrifying, and this final installment of the Survivor “trilogy” was unquestionably Matthew’s strongest effort yet. I did a two-part text interview with him that you can read here.

Late last year, Matthew released the first of his fan films NOT to have the word “Survivor” in the title. LEFT BEHIND was an action-packed fan film with fights and stunts amid an almost tongue-in-cheek plotline—a very unique offering! That one got a two-part text interview, too.

Although each film stands alone, they can also be watched as a longer storyline. Interestingly, each release is a different TYPE of film: pscho-thriller, buddy adventure, terrifying physical and mental struggle against a more powerful being, and comedic action/adventure survival story.

Matthew’s latest offering once again stands out—both alone and together with the others—as a truly unique genre film. This time, the theme is “mind trip” in a big way, as you never really know which way is up or down, who is who, and what exactly is going on until the very end. Although some fans weren’t crazy about such an odd format, it’s actually a very challenging story structure to edit together and make work. Personally, I think it’s a very strong effort, very ambitious, and definitely worth checking out…

Like Matthew, I decided to switch things up a bit, since we’ve already done text and audio interviews. So this time, we went for a video interview…