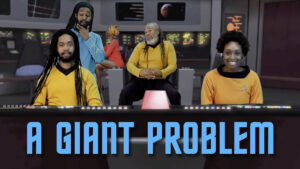 It’s no secret that I love Star Trek fan films (kinda hard to keep blogging about ’em for seven years if’n I didn’t!). It’s not that they’re all superb cinematic viewing experiences or that every script kicks ass or every performance is a masterpiece of dramatic presentation.

But that’s why I love these productions!

I love seeing what fans can do with the resources they have or can assemble—either alone or with the help of crowd-funding. I love to see what they can accomplish. And most of all, I love the community that assembles around them in support and camaraderie.

And that’s what happened recently with a very low-budget fan film release titled A GIANT PROBLEM. I learned about it after VANCE MAJOR, the fan behind the CONSTAR series, spotlighted the project. So I watched it, as did many others. The film didn’t have incredible sets or top-notch costumes or jaw-dropping visual effects. It was simply a bunch of fans in store-bought uniforms standing in front of green screens with composited background stills from TOS.

And I thought: “THIS is the essence of what Star Trek fans are!” Take a look…

The first thing I noticed was probably the most obvious: everyone in the cast is an African American. While there are certainly a decent number of Black fan filmmakers both in front of and behind the camera, it’s no secret that, at least when it comes to Star Trek fan films and series—for whatever reason(s)—most of the people involved are white. So an all-Black cast is a true rarity, and a most welcome one!

More than that, however, these folks had their heritage on proud display with hair, clothing accessories, and even jewelry that embraced and celebrated Black culture. If you’re a fan of IDIC, this is certainly the fan film for you!

And then, as I watched the closing credits, I saw this… 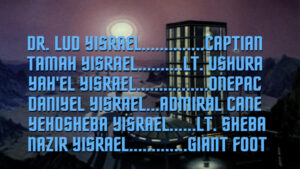 Everyone in the cast shares the same last name! In other words, this was a family project. How awesome is that?? While there are some husband/wife, parent/child, and even sibling fan filmmakers, seldom does an entire family get together to produce a film. I found myself wanting to learn more about these fine fan folks.

Heading off to Facebook, I discovered that writer/director/lead actor LUD YISRAEL is a jazz man from Chicago who owns the Neo Jazz School of New Orleans and has a doctorate in theology from Yahweh University. AND he’s a Trekkie??? Along with his family?

Well, if that wasn’t worth a video interview, I don’t know what would be! So I reached out to DR. LUD and had a wonderful discussion with him, his wife TAMAH, and his son YAH’EL YISRAEL. And what was the most fun was seeing and hearing how excited they are to learn more about and dive into this wonderful fan film community that we share…