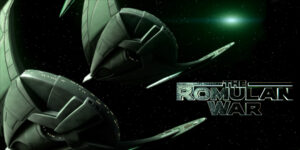 Back in September, fans were treated to the premiere of the long-awaited STAR TREK: FIRST FRONTIER, in production for five years with a 5-figure (possibly 6-figure) budget. Now, barely seven weeks later, we get our SECOND long-awaited, “top tier” fan film, this one more than three years in production (although the script dates back nearly a decade) and also with a solid 5-figure budget.

The first hints of THE ROMULAN WAR fan film appeared back in 2017. Not to be confused with the fan series THE ROMULAN WARS (plural) from show-runner LEE GARTRELL in Arkansas, this work-in-progress fan film from show-runner MARK NACCARATO in Tennessee is a straight-up two-parter—presented in the same “mockumentary” style as PRELUDE TO AXANAR. Many fans assumed that Mark had been inspired by Prelude to make a fan film in a similar format, but in fact, he’d had the idea and written the first draft of the script three years before Prelude ever premiered. Great minds think alike!

By the time 2018 hit, The Romulan War had most of its scenes filmed and was crowd-funding for mainly post-production costs with a $10K Indiegogo (which ultimately took in more than $13K). With visual FX by the sensei of CGI, Great Britain’s SAMUEL COCKINGS, the trailers and stills from this dynamic fan film created a palpable excitement throughout the community. Frustratingly—but unavoidably—post-production would stretch out another two-plus years. However, unlike other fan films, The Romulan War served fans an almost constant stream of “hors d’oeuvre” vignettes and trailer/prequels and even a couple of short comic book stories.

The two trailer/prequels—PREAMBLE TO WAR and the just-released SHIPS OF THE LINE—serve not only to tease the full fan film but also to expand upon it with footage and story points not included in the final release due to time limitations. So consider the above two vignettes required pre-viewing if you haven’t watched them yet.

Likewise, Mark released six different “enhanced” audio dramas (voice-over performances of actors reading the logs of people who were part of the war, augmented by graphic imagery and short animations, including CGI). These short films, called WAR STORIES, can all be viewed on this playlist. (One of them stars yours truly!) And finally, there are the two short comic book stories INTRUDERS and HOLOCAUST, each of which also ties into the main fan film.

And speaking of which, I bet you’re dying to finally see it. So without further ado, I am proud to present to you The Romulan War, Part 1…

And now that you’ve watched that amazing fan film, let’s get to know the person behind it, Mark Naccarato, and all about his journey getting from there to here…