Fan Film Friday – To perk or not to perk (or percolate)? The big risk for my INTERLUDE crowd-funder 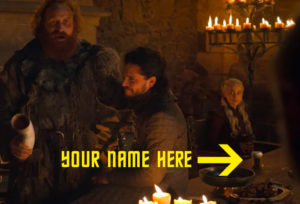 Among the more annoying and often-ignored fan film guidelines is number 6e: “No unlicensed Star Trek-related or fan production-related merchandise or services can be offered for sale or given away as premiums, perks or rewards or in connection with the fan production fundraising.”

And as I’ve said elsewhere, a number of post-guidelines fan film crowd-funding campaigns have ignored that one…offering posters, patches, and a bunch of other perks. Thus far, CBS hasn’t seemed to mind. In one case, the production even got permission from CBS to offer perks!

However, I’d be naive to believe that CBS won’t have me and my production under a microscope. So I’m taking great pains to keep INTERLUDE completely separate from Alec Perets’ Axanar sequels (other than having Alec play Garth) and to establish very clearly and publicly my intention to follow ALL of the guidelines.

Man, it’s a huge risk. Perks are exciting! Perks are cool! Perks make people think they’re getting something tangible for their donation (which, if you think about, isn’t that different from simply buying that perk…which is probably why CBS doesn’t want fan productions to do it).

But perks also cost money to make and to mail. In addition to the patches or posters or T-shirts or mugs, you’ve got to buy shipping materials and pay for postage. And heaven help you if you’ve got backers from places like Asia or Australia. That $10 donation is likely gonna cost you $25 just to mail them a frickin’ patch!

So I’ve obviously got a pretty good reason NOT to offer perks. I’m already trying to raise about $20K. Add in perks and packaging and postage, and you can increase that number easily to $22K or $23K!

So instead, all I am going to be offering as a “perk” is getting your name in the credits. But are people going to want to donate simply to see their name at the end of my fan film??? Granted I do have some fun categories for listing the names:

The idea is that, the larger your donation, the higher your rank and the larger your name in the credits. And for the Associate Producers (assuming I get any), they will also be invited to join us at ARES STUDIOS for filming. They’ll have to pay for their own transportation and lodging—but I figure if they can afford thousands of dollars to donate to a fan film, they shouldn’t have a problem with a plane ticket and a Holiday Inn Express.

And there’s one more fun thing I wanna do…!

For whichever backer gives me the highest donation, they will have their name written on a special paper coffee cup (possibly from the Federal Coffee House) that will appear somewhere in one of the scenes of the Interlude fan film. It’ll look completely out of place, just like in Game of Thrones, and the cup will be angled to make certain the donor’s name is visible (and possibly even purposefully misspelled…does that happen to any of you folks at Starbucks?).

Now, as I’ve mentioned elsewhere, while there won’t be perks, there might—MIGHT!!—be a “thank you” gift. If we take in enough to send out some extra patches to people, I will. And if we reach a level high enough, there’s a really, really cool item I’d like to print and send out. It will have zero Star Trek intellectual property in it, but Axanar fans will love it.

Isn’t a thank you gift just a “perk by any other name”? Not really. Perks are expected, and usually determined based on amount given (the higher the donation, the better the perk). For my campaign, nobody is guaranteed anything other than their name in our credits (and possibly on a coffee cup). And indeed, if we miss our goal or only barely clear it, I can pretty much guarantee nobody will get anything. So donations should be given with no expectation of anything arriving in the mailbox.

Is a thank you gift a “reward” (also a no-no)? Hard to say on that one, but I don’t see it as such. Rewards tend to be gestures of individual merit. I see a thank you gift as more about “sharing the good fortune” of a successful crowd-funder among all of our donors. And to be honest, CBS should be happy that I’ll be wiping away any surplus I have left after covering expenses. After all, better that than have a fan pocketing “profit,” right?

So why don’t I simply shut down the campaign when we hit the goal (assuming we do)? Why keep raising funds we won’t need? Because I don’t know for sure that we won’t need them. What if something major and expensive goes wrong? What if we end up needing an extra filming day or the costumes are more expensive than we thought? What if Alec Peters eats all of the sushi??? Better safe than sorry, right?

Anyway, that’s the risk we’re taking here: no perks, possibly/probably no thank you gifts, pretty much nothing to justify you donating your money to our project other than your desire to help a bunch of filmmakers who love Star Trek and Axanar make a fan film that we hope you all will like.

Will it work? We’ll find out soon. My crowd-funder is scheduled to launch in a week and a half…!