Fan Film Factor – Moving BEYOND Anger (my decision to fan up) 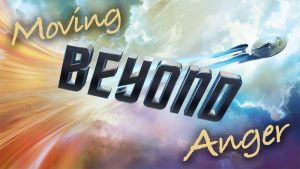 CBS and Paramount ruined my 50th Anniversary!!!  The whole year–January to December–they just ruined it.  First, no sooner had Christmas ended, they sued Axanar, my favorite Star Trek fan film ever.  And in doing this, the studios split fandom into a Hatfield and Dr. McCoy feud.  Then, just when I thought the anniversary year might be saved after all when J.J. Abrams announced the lawsuit would be “going away” and fans allowed to make their films…WHAM!…ridiculously Draconian guidelines were created by the studios that seemed purposefully designed to end Star Trek fan films as we know (and love) them.

I was so pissed that I started the SMALL ACCESS campaign on Facebook to protest these new guidelines and try to get them revised.  Hundreds and hundreds of fans joined me on my impassioned quest, sharing their anger and frustration, as well.  Some threatened a full-on boycott of all things Star Trek: the new movie, the new TV series, novels, licensed merchandise…you name it.  They suddenly wanted nothing to do with Star Trek anymore.  And several of them were encouraging me to do likewise.

For the record, the SMALL ACCESS campaign was never about a full-on boycott.  The idea of SMALL ACCESS was actually meant as a way for fans to watch the new Trek TV series while still sending a financial message to CBS.  By viewing episodes together in small groups with a “designated subscriber” and everyone sharing the subscription cost, CBS stood to lose 50-85% of potential revenue for their streaming service from fans who participated in our campaign.  Certainly not enough to kill Star Trek (unless we somehow made it to a million members or something), but potentially enough to get noticed…or so I hoped, and still hope.

As the premiere of Star Trek Beyond got closer, I noticed how angrily some people in the SMALL ACCESS group were talking about the new movie, about the other two rebooted films, about Paramount and CBS, and about fans who weren’t planning to boycott it entirely.  I read those many comments and arguments, and it got me to thinking about what this year would have been like were it not for the lawsuit and the new constraining guidelines that threatened most–nearly all–Star Trek fan films. 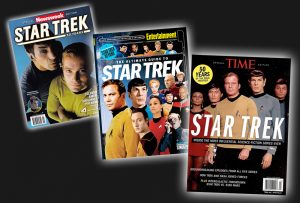 This was supposed to have been the 50th anniversary of a cherished sci-fi franchise that had been left for dead nearly 47 years ago.  At a time when there had been no new Star Trek in theaters or on television for three years (since the disappointing–to some–Into Darkness), we were now getting both a new movie AND a new TV series, plus an explosion of licensed merchandise alongside a flood of marketing and media coverage of our beloved franchise.  Heck, just last week, special Star Trek anniversary editions of major magazines like Time, Newsweek, and Entertainment Weekly graced newsstands.  Had the lawsuit and guidelines never happened, this year would have been a fanboy nirvana for my inner (and outer) Trekkie!  Heck, I’d even spent a preposterous amount of money on a 5-day pass to Creation’s 50th Anniversary Star Trek convention in Last Vegas this year…a way to celebrate my own 50th birthday just a few months early.

I thought long and hard about that convention.  I’d already bought my tickets, and I wasn’t going to NOT go.  And therein lied the rub!  What was I going to do when I got there?  Sit in a corner and mope?  Walk past dealer table after dealer table with my nose in the air not even looking at stuff for fear of giving my dollars to prop up a licensee of the evil studio empire?  Picket in front of the Rio Hotel in the 120-degree desert sun?  None of those options seemed to be worth a $500 convention ticket. 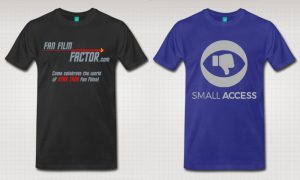 I was making myself a T-shirt on the Spreadshirt website to advertise FAN FILM FACTOR.com, and I thought about making one for SMALL ACCESS, as well…with the parody CBS logo I’d designed with the “thumbs down” in the middle.  After all, I was angry!  People would see my shirt, and maybe they’d ask me about it, and I’d tell them…oh, I’d give them an earful!  I’d wear my anger on my shirt with pride, I would!

Then the words of a short, wrinkled, and green CGI Muppet of a Jedi master from a different sci-fi franchise began to echo inside my brain… 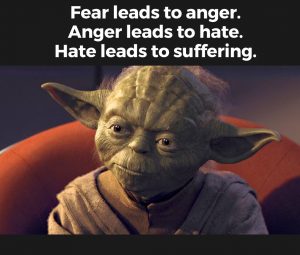 Fear?  Check.  I had it the moment I first read about the copyright infringement lawsuit.  Would Axanar never get made?  Would other fan films suffer the same fate?

Anger?  Check.  I was SOOOO angry about the lawsuit and the guidelines.  I had the snarky blue T-shirt already in my shopping cart!

Hatred?  I was getting there.  Certainly others had beat me to it, whether it be directed at CBS and Paramount, at J.J. Abrams and his over-caffeinated version of Star Trek, at Alec Peters and Axanar for angering the sleeping god, or just at other fans for not sharing the same opinion.  I was so close to hatred, and that would lead to…

Suffering!!  (At least according to Yoda and George Lucas, but I believed them both).

But who would be suffering?  CBS and Paramount?  They don’t know me from a hole in the wall.  I could walk around in that T-shirt all weekend long, and no one at the studio would care.  I could completely boycott the next movie and TV series, and really, neither studio would give a hoot.  Right now, there are just over 1,200 people in the SMALL ACCESS Facebook group.  If each of them boycotted the new movie, that might cost the studio $12,000-15,000…out of $40-$60 million.  That’s barely a rounding error!

As for boycotting the new series completely, would that have any noticeable effect?  It all depends on how much larger SMALL ACCESS becomes.  Will we be thousands of people?  Tens of thousands?  Right now, watching in small groups would cost CBS between $36 and $50 per year per person.  A full boycott only increases that potential loss to $72.  So fans don’t really have to boycott the new show completely to make an impact.

“Then really,” I asked myself quietly, “who is suffering from me boycotting Star Trek completely?”  Not the studios…

Y’see, even through “The Kelvin Timeline” wasn’t MY Star Trek, I actually enjoyed both of the previous two movies, and I suspect I’ll enjoy the new one (it’s getting some very positive reviews…even from hardcore fans).  And heck, I’ve sat through some pretty painful fan films (but remember the FAN FILM FACTOR PRIME DIRECTIVE: there’s no such thing as a bad Star Trek fan film!), and if I could do that, watching Kirk fight a ridiculous red scorpion on an ice planet or seeing Dr. McCoy cure death isn’t all that awful.

And more than that, my five-year-old son LOVES Star Trek!  We watch TOS episodes together each night while I exercise.  We dress up in uniforms and take pictures at Vasquez Rocks (what he calls “Star Trek Rocks”) and at Starfleet Academy in Sherman Oaks.  And we’ve been doing this since he was a baby.  He’s sat in the captain’s chair at the offices of Rod Roddenberry.  He’s sat on the lap of LeVar Burton…even though Jayden has no idea who that guy was; he’ll know when he gets older.  (And yes, I know I’m bragging.  My blog…I get to brag.)  He’s played with phasers and communicators and shuttlecraft and Trek action figures for years.  He’s even a member of the the STARFLEET international fan club.  And I love that, at least right now, my son loves Star Trek as much as I do!

Over the past few weeks, Jayden has been seeing an increasing number of posters and billboards around Los Angeles advertising Star Trek Beyond, words he can read while also noticing the USS Enterprise and someone who looks like Spock.  He knows there’s a big, new Star Trek movie coming out, and of course he wants to see it…with Daddy!  Why wouldn’t we?  We saw The Force Awakens together in the theater and watched each non-JarJar Star Wars movie together.  We watch Star Trek nearly every night.  Why wouldn’t we go see this big, new, exciting Star Trek movie?

How would YOU explain the concept of an angry boycott to a bright-hearted five-year-old?  Actually, don’t tell me because I don’t really want to know.  I just want to watch Star Trek Beyond with my boy and see his eyes light up with wonder.

And that’s NOT to say that everyone needs to follow my lead!  Indeed, this blog I’m writing today is not meant as a sermon or some “revelation” trying to draw others into the light.  It’s simply me explaining what happened in my own mind to bring me to the place I am right now concerning Star Trek and my relationship to it.

And so I’ve decided that I want to enjoy the 50th Anniversary Creation Convention, really enjoy it…despite it being Creation, my ticket costing 500 bucks, my room costing more than a thousand dollars for five days, and despite the fact that one of the things that I cherish most right now–fans funding and producing their own Star Trek stories in amazing (and sometimes not-so-amazing) films–is being crippled by a series of overly restrictive guidelines written by people who just don’t understand what a valuable marketing resource fan films are to their franchise.

Despite all that, I want to see the new movie with my son…even it it means–gasp!–Paramount gets $25 of my money.  I just want to forget all the fear, the anger, and the hatred for five days in Las Vegas and be a Star Trek fan again…to gush and cheer the actors, buy way too much overpriced unnecessary crap in the dealers room, walk down the hotel hallways proudly wearing my way-too-tight TOS Kirk tunic with the vice admiral braids on the sleeves.  I want to enjoy the company of friends and fellow fans who share the same love I feel and who just want to celebrate this amazing show that, despite all odds, is still going strong five decades later.

And with that, I clicked the “remove item” button for the blue SMALL ACCESS T-shirt in my shopping cart.  The protest will still be waiting for me again when I get back from the convention on Monday, and there will still be ample time in the months ahead to fight the good fight to save Star Trek fan films from the evil studio executives.

But for those two hours while I watch Star Trek Beyond with Jayden, and for those five days in Las Vegas, I’m just going to be that drooling, giddy Trekkie fan boy.  I’m going to “fan up,” if you will.

After all, the 50th Anniversary of Star Trek is a once-in-a-lifetime event.  And if I miss it simply because of my own choice to be angry and hateful, then the only one suffering–when all is said and done–will be me.