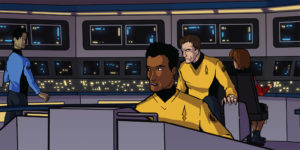 On Monday, the GoFundMe campaign for INTERLUDE crossed the $10,000 threshold (on our way to $19,500) with 140 backers! Plus there’s a handful of Paypal donors. And of course, donations are always welcome right here…

And without further ado, the blog…

As we present the next-to-last page of “Stardate 2245.1,” I’ll remind you all once again that, if you want to be know nothing about my Axanar Universefan film Interlude, then you should stop reading now and find another webpage to visit. The comic story is almost the same as the fan film story. So if you want to be completely surprised by Interlude, staying on this blog entry is pretty much the worst place you could be!

There, I said it.

As much as I love every single panel of every page of artwork that my illustrator DANIEL FU produced, if I had to pick a favorite, Page 6 would be it. Go ahead and scroll down to the bottom of this blog page to check it out and then come back up here, because it truly is a beautifully composed masterpiece.

I recall that Daniel and I spent a lot of time on this page, discussing it both before and after he had produced the first clean version. Initially, Daniel’s bridge background in panel three wasn’t accurate to the photos of the actual set, and while I hated asking my poor, overworked artist for a redo, I also felt it was very important that this particular panel look like the real thing.

This is THE “moment” of the entire story…the point where the enormity of what just happened begins to sink in. In my mind, this is also one of the critical pieces of the puzzle that helps define Kelvar Garth as a character, both during the war and after. He was ready to nobly and bravely sacrifice himself, his ship, and his crew in order to save the day. That’s the kind of officer Garth is—much like Kirk and Starfleet’s other great captains.

But fate doesn’t allow Garth the “easy” way out of this battle by becoming the martyred hero. Instead, Garth has to watch as his friend Jakande makes the ultimate sacrifice, along with a different gallant Starfleet crew, all so that Garth and his crew can escape and save Ramirez.

I truly believe that survivor’s guilt over this battle and countless others—but especially this one—haunted Garth right up to “Whom Gods Destroy” and possibly beyond.

Anyway, that one panel had to have an accurately drawn Ares bridge lest the Axanar faithful notice all the inconsistencies and mistakes rather than feel the impact of that moment,. Fortunately, Daniel is a very professional and dedicated artist, and if there was photographic reference (which I had in spades from Axacon last November), then he was willing to redraw the panel.

It’s not simply that one panel, though. I personally find the whole page to be mesmerizing. The first thing that stands out for me is the color shift from the previous pages—which were dominated by “warm” colors like reds and yellows—to a “cool” palette of blues and blue-grays. Sure, there’s still the yellow of the buttons and tunics, but you can “feel” the heat slip away from the intense pages of suspenseful action that came before. And if you look at the page immediately before this one, although Page 5 has the big yellow/orange explosion and red letters of the sound effects, it also introduces the “cool” greens of the Klingon D7’s. Green comes right before blue (and after yellow) in the spectrum. So Page 5 begins the transition from warm to cool colors, and Page 6 completes it.

And suddenly I am back at design school analyzing color theory (which was actually a really good class)!

My other favorite part of the page is the time-shift from young “Four Years War” Garth to the older “documentary” Garth whom we see in Prelude to Axanar. When I first wrote my alternate Axanar script, my idea was that the bridge scenes I added to Alec Peters’ Peters’ 2-part script would be Starfleet “archive footage.” The rest of my script was in that same mockumentary format as Prelude. So rather than end my comic book story on a downer with the Artemis getting destroyed, I wanted that moment to carry over even 10 years into the future as we learn that Garth is still deeply haunted by his memory of this event.

My initial idea of how to handle that transition from “then” to “now” was to have young Garth facing older Garth, each staring out into the distance as they tried to process what had happened—younger Garth worried about the future, and older Garth remembering the past and what had come next.

But Daniel had another idea which he pitched to me, and as you can see, I liked it better than mine. In fact, I loved it! The two Garths in identical poses, with identical facial expressions—the only differences being the color of their hair and the design of their tunics—silently explains the transition in time and space. And bonus kudos to Daniel for blurring the background of each panel to bring all of the focus onto the character himself.

Okay, only one page to go, and you’ll see it next week. Remember that, for all of the pages below, you can always click to enlarge the image… 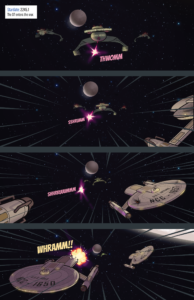 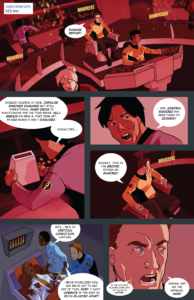 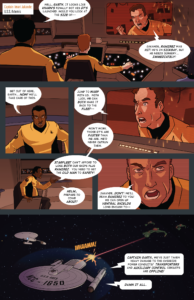 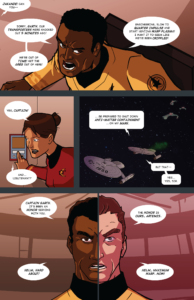 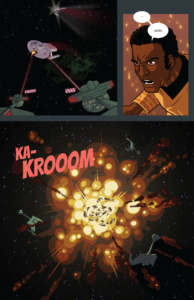 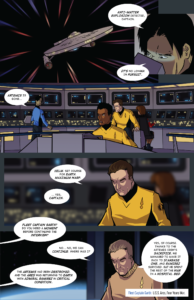