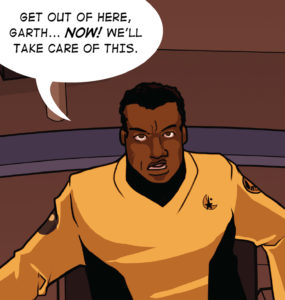 To donate or if you’d just like to help spread the word, here’s the link:

Once again, a friendly reminder that this 7-page (plus cover) comic book story is nearly identical to what you will see when INTERLUDE is completed and released. So if you don’t want to know anything about my fan film—and that’s fine!—please stop reading now and don’t look at the page artwork below…’cause that wouldn’t be quite as fine.

Let’s talk briefly about the captain of the USS Artemis: Imari Jakande. When I first wrote up my “alternate” script for the two Axanar sequels, I’d named the captain of the Artemis “Kyle Donovan,” and I didn’t really think about his race or background. I just needed a person in the center seat of that starship. Kyle could just as easily have been Kylie, as well. Race, gender, ethnicity…they just weren’t as important to me at that moment as getting my thoughts down on paper (well, keyboard) before they faded from my mind. Initially, I don’t even think the original three or four pages of the scene with the Artemis and Ares took me more than 15 minutes to write.

So when I first expanded that sequence into a seven-page comic book script, I left the character’s name as Kyle Donovan. My illustrator, DANIEL FU, suggested making him a black man, and I had no problem with that. Good idea! And when the page artwork came in, I loved what I saw.

A few weeks later was when I first showed the artwork to ALEC PETERS. I had already gotten his thumbs-up to do the comic, but I wanted him to be able to review the progress. After all, it was important to me that this story be acceptable “head canon” for the Axanar “universe.”

Alec liked the artwork, but suggested that, since the captain of the Artemis was black, perhaps he should have an African name. By this, Alec didn’t mean African American but rather from the African continent—like Uhura—with an authentic African name.

As Alec did with the Axanar character of Sam Travis, who was named after a famous military leader, I wanted my character to have an African name with some historical significance.

Turns out that was much easier said than done!

First of all, Africa is a BIG place, covering countries from Egypt and Tunisia to Mali and Mauritania, Ethiopia, Kenya, Congo, Sudan, Angola, Tanzania, Zimbabwe, South Africa, and dozens of others. There is no more a “typical” African name than there is a “typical” European or Asian name.

The second challenge is that most Americans—including me(!)—are only familiar with a handful of famous African names…most of which would end up being distractions from the story if I used them. Names like Mandela, Obama, Tutu, Sadat, Annan, and Boutros-Ghali were immediately crossed off my list. And despite Levar Burton having played the character in Roots, I opted not to call my captain Kunta or Kinte.

I won’t bore you with the research that I did, but I finally hit upon Alhaji Lateef Kayode Jakande, governor of the Lagos State of Nigeria from 1979 to 1983 and later the Minister of Works from 1993-1998. He remained politically active well into his 70s and is still alive today. Although his career was turbulent at times and not always sterling, he was described by one of his contemporaries as epitomizing “…resilience, positive audacity, bravery and bravado, and a knack for excellence.”

Why him and not some other famous African (or even non-famous African)? To be honest, I just really liked the way the name looked and sounded. Jakande. But now I needed a first name.

Thanks to BabyNames.net, I had my pick of hundreds of African names and their meanings. Ultimately, I chose Imari, which is the male equivalent of the female name Imani and means “faithful” or “loyal.” I certainly felt that my character was loyal—to Garth, to Ramirez, to Starfleet, and to the dream of the Federation.

So Imari Jakande, captain of the USS Artemis. Take a look at his first appearance (click to enlarge any of the pages below)…