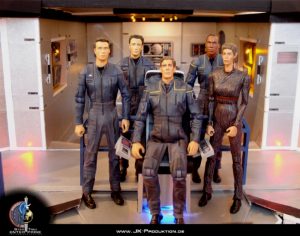 I’m guessing that the makers of the German fan film STAR TREK: ENTERPRISE – THE NEW GENERATION were saying “Was ist los?” (which loosely translates to WTF?) when they got the notice this past Tuesday from YouTube that CBS had filed a copyright claim against four of their fan film videos!  And most confusing of all, these were videos which had been online since 2007!!!

So what in the name of Gott was going on here???

It was surprisingly well done with an engaging story, decent VFX, and solid characterizations of the NX-01 crew (with notable absences by Dr. Phlox and Ensign Sato because, I’m assuming, there was no Hoshi Sato action figure and Phlox’s action figure only came wearing an environmental suit).  However, it was also entirely in German, meaning most non-German speaking fans (like me) couldn’t enjoy it as anything other than a visual experience.

That changed a year later when several members of the Star Trek: Phase II cast lent their talents to translating and re-recording the dialog in English.  A new English version, also a half hour long, was released with the new title “Crossroads.”

In June of this year, just a week before the new fan film guidelines were announced, Jürgen Kaiser released his second stop-motion Star Trek fan film, Star Trek ENTERPRISE II Der Anfang vom Ende (“The Beginning of the End”).  This one is an hour long, and it’s still entirely in German.  However, it’s close-captioned with English subtitles, and it’s certainly worth checking out.  The production quality is amazingly good, the characterizations even better than in “Crossroads,” and the VFX have improved immeasurably.

Jürgen himself had help writing and producing this time around, but he still self-funded and built all of the miniature sets himself.  Not wanting to get into any trouble with the studios, Jürgen didn’t do any crowd-funding.  Instead, he spent enough, Jürgen says, to buy a good-sized new automobile.  He’s essentially been working on this latest film since he finished his first one–and that’s seven years!  You should definitely check it out.

Now, remember that I said this fan film was released before the new guidelines came out.  So according to John Van Citters during his Engage podcast interview, both the most recent project as well as the first film should be allowed by CBS to remain up on YouTube.

Well, think again.  On Tuesday, Jürgen published the following message on his Facebook page (which I’ll provide a translation for after displaying the original):

And thanks to my friend from SMALL ACCESS, Burkhard Musik-Flieger Weber, I can tell you what that means in English:

CBS continues with the intergalactic cleansing of my YouTube channel.

Tonight, 4 videos were affected. But this time it wasn’t about the footage or the music. No, it was about the audio tracks, single audio tracks to be precise. It’s really astonishing what kind of trouble CBS puts into this. Cause these bans are displayed not automatically but manually.

What’s even more surprising is the fact that up until now, only material that was online before 2013 is getting banned. It even affects a video from 2007.

Of course objection was raised against it and the videos are online again, as long as the verdict from CBS and YouTube is pending.

So to be clear, it wasn’t the hour-long fan film which he just posted that was being hit with a copyright claim by CBS.  It was the 2008 fan film and an even older teaser from 2007 that had been online nearly a decade with no trouble at all from the studios.  In fact, back in 2007, while Jürgen was still in development, he actually contacted Paramount Licensing (ownership of Star Trek did not transfer to CBS until 2009) and received the following note back from them…

Everything is good then. 🙂 And we’re delighted by the fact that especially the German fans are that active! Yeah – Rock on! 🙂

It would have been difficult if you would had imagined some concrete support from us. As a licensee our hands are always somewhat tied here, unfortunately. Best wishes, yours Paramount Pictures Team

So yes, fans were scratching their heads–especially Jürgen himself–about what was going on with this copyright claim.  And CBS wasn’t even complaining about the obvious, that Jürgen was making a fan film about their Star Trek: Enterprise intellectual property or using licensed action figures in his project.  No, it was about single audio tracks.  That doesn’t mean music, folks, because the scores for both fan films were completely original, composed specifically for the two productions.

So what was CBS going after…the sound of the phasers?  Heck, dozens of other fan films have phasers, tricorders, swishing doors, transporters, bridge background noise, going to warp speed, etc.

Was there a chance this wasn’t CBS but rather some impostor?  Possibly.  But one would assume that YouTube wouldn’t accept a copyright claim by someone claiming to be CBS without actually doing at least a cursory background check, right?  And let’s face it, you wouldn’t expect an eight-year-old Star Trek fan film to have enemies out to sabotage it.  Maybe one of the bigger, more controversial fan series might be a target, but this one from Germany?  Hardly seems likely.

For a couple of days, some Star Trek fans (at least the few who knew about it, but word was spreading quickly) feared that CBS had suddenly decided to go after fan productions and try to get them taken down from YouTube one-by-one.  In fact, I was getting a blog ready myself, trying to contact the producers for an interview.

But within a few days, the point became moot (at least for now).  Not wanting to go gently into that good night, Jürgen challenged the claim.  On Friday morning, he posted the following message to the STAR TREK ENTERPRISE II Der Anfang vom Ende Facebook Page:

It’s kind of funny what’s happening on my channel with CBS and YouTube at the moment!

Why did they threaten me with the take-down of my videos or to shutdown my channel in the first place and now this?

Is that a campaign to frighten us Fan Film Producers?

But you won’t be successful with me. I followed your rules and produced the film even without any donations. JK-Productions wanted to do something good with this Fan Film, for the fans and not against the fans. The commercial background is not that important for us, we wanted to entertain the fans and keep the fandom alive.

And there you have it.  What happened?  We still don’t know.  What will happen next?  We have no idea.  Was this a test fire of a new fan film strategy on the part of the studio to instill fear into the hearts of producers?  Was it a new guy at CBS wanting to make a name for himself and discovering too late that the studio isn’t trying to pull down fan films from YouTube after all?

Was it a glitch?  Did an automated YouTube system accidentally flag these videos and preemptively suspend them during a random sweep of old videos?  Fan film VFX guy Gabriel Koerner commented to me: “A fan film trailer I cut for somebody that’s been up since 2011 only JUST became ineligible for monetization. These filters weren’t in place a few years ago so older videos still get combed over. Like mine did recently.”

We can engage in all the speculation we want to.  The fact is, we know nothing, Jon Snow.  The claim was made, challenged, and then withdrawn.  Unless something like this happens again or the studio decides to explain their actions (if it was even their action), what actually went on over there at CBS or YouTube might forever be a mystery to us fans.

But hey, at least the fan film got to stay up on YouTube, right?