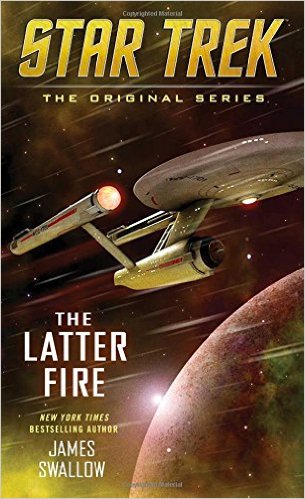 I have known James Swallow, well known Star Trek and Warhammer 40,000 author, for a few years.  He is not only a fantastic author, who wrote one of the best books in the Horus Heresy series for Warhammer, but he is a fan of Axanar too!

James is here at the Horus Heresy Weekender and I had a chance to chat with him.  Two years ago at this event, he and I got to spend a really nice evening drinking and talking Axanar, Star Trek, and Warhammer.  His insights into Star Trek, writing and Axanar were one of the highlights of my time working on Axanar before the lawsuit.  Then, about a year ago, when his Star Trek book The Latter Fire came out, he did Axanar a great honor by mentioning us in his Acknowledgements.

I didn’t want to push this out to fans and donors when it hit the book stores, because we had just gotten sued, and I knew CBS wouldn’t be happy with James, and I didn’t want to stir anything up.  But he wrote it before the lawsuit, when But now that the lawsuit is settled, I think it is important for people to see, that Axanar is a phenomenon that has a lot of fans in the professional ranks of Star Trek.

I recently got a very nice message from a Star Trek Discovery crew member along the same lines as what James said.  We appreciate all the people who work on Star Trek and who show their support for Axanar.  And to James Swallow, thank you for your support of Axanar and your friendship.