AXANAR fans’ generosity helps one of our own…

Mark Payton is a good man.  He’s an army veteran currently living in Rochester, NY with his lovely wife Juli Ann.  Mark is also an artist who has created a series of beautiful drawings of the various Axanar characters and ships.  He’s been a supportive, super-enthusiastic backer of the production, good-natured and helpful for going on six years now.

Last month, Mark’s wife Juli Ann almost died from congestive heart failure and had to be hospitalized for a week, accruing major unexpected medical expenses.  Mark is currently on unemployment, but because of a small missed detail, he was cancelled out of it and forced to re-apply.  That means that he and Juli Ann will not have any income till some time in January. But rent is due now.

Mark and his wife needed $1,500 to get them through the month, and having nowhere else to turn, they set up a GoFundMe campaign, asking for help. And Mark was even willing offer something in exchange for donations.  Over the years, Mark has produced quality prints of his Axanar character and ship artwork to sell at Axacon and online.  For $50, a donor will get a full set of the physical character prints (plus digital versions of each).  For $75, they get the the prints and digital files plus the Sam Travis and Garth prints will be autographed by J.G. Hertzler and Alec Peters.  For $100, Mark will throw in the prints of the USS Ares and the Klingon D6. Lower donations of $25 will still receive the digital files, and $35 will get the donor the digital files plus two physical prints (for an extra $5 to cover shipping).

Mark set a goal of $2,000 to cover GoFundMe’s fees and postage costs.  And over the next two days, eight people chipped in $690 (including $75 from me).  Hey, it’s Christmas—and Rochester is frickin’ FREEZING this time of year…bad time to be homeless (especially when you’re recovering from congestive heart failure!

But after the promising start, three days went by with NO new donations…not a single dollar.  Now, $690 is certainly nothing to sneeze at but it’s well short of paying the December rent.  That’s when Alec Peters stepped in.

Help a great Artist & His Wife!

Axanar Artists extraordinaire Mark Payton needs our help! Mark recently lost his job and because of a paperwork snafu, won’t get his unemployment for another month. He desperately needs some help and we want all Axanar fans to think of helping Mark a little bit. He has a GoFundMe we hope you all will donate to and is giving out some awesome prints of his Axanar art as perks.

Now, we all know that Axanar fans have been very generous over the years and even over the past few months.  Indeed, nearly $44,000 has been privately raised through the Ares Digital campaign.  In addition, many Axanar fans also stepped forward to help fund more than $21,000 for my Axanar Universe fan film Interlude.  And just last week, they helped donate an additional $4,760 to replace a green screen, which was accidentally ruined during the Interlude shoot at Ares Studios in November.

So it would be perfectly understandable if Axanar supporters and donors simply threw up their hands and shouted, “All right already!  Enough is enough!” and took a pass on this latest request for them to once again ride to the financial rescue.

But that’s not what Axanar is all about.  We’re a community, we feel the love, and we help those in need when we can.  It’s happened before, with emergency fund-raisers for Brian Holloway in 2015 when he and his family lost their home to a fire, for John “Stoggy” Strekis when he needed a new well pump to get water to his home, and for Karen Moore a few months ago when she became homeless.  Karen and Brian weren’t  even an Axafans, just good people who needed help…and Axanar supporters were quick to step up.

And so they did again with Mark Payton.  Within 24 hours, Mark’s campaign had crossed $3,000!  As I type this, the total stands at$3,454 from 58 generous donors…some putting in as little as $5 and 18 of whom put in $100 each!  That, my friends, is amazing and heartwarming, and the whole reason why Axanar fans are the best.

Mark sent out the following update this morning…

For All Who Have Donated my wife and I say Thank you SOOOOOO much. As it stand right now I will be going to my automated rent payment site and paying 2 months up front which will cover us till March. Then I will be collecting up and getting autographed a few prints for shipping. For those that donated by name at $25 or higher I will need your email address. For those at $50 or more I will also need your physical street address. Please private message me that info at: https://www.facebook.com/mpgraphics or email me through this GoFundMe page.

And even though their goal has been reached and rent prepaid for the next two months, it’s still a lean time for Mark and Juli Ann. And follow-up medical bills are certain to pile up.  So if you want to help them and haven’t yet, donations are still being accepted…and posters are still available (they are REALLY nice). Just click on the link below… 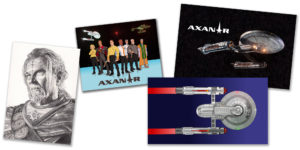