Last month, AXANAR super-fan TREY McELWAIN released the cover and first page of his new Axanar fan comic “Arcanis IV“—part of his “Tip of the Spear” series focusing on some of the major battles of the Four Years War.

Nearly a year ago, Trey released the first-ever comic story based on the hugely-popular Prelude to Axanar Star Trek fan film: the four-page (including cover) “Trial By Fire.”  Trey wrote the comic and his friend DANIEL FU illustrated the story, which looked at a space battle during the Four Years War with the Klingon Empire.

Originally, the plan for this new comic story was to release one new page each month for the next five months until all seven pages (plus cover) were completed and posted.  Then Trey has another two chapters in the saga that will follow, also with one page released per month.

So you might be wondering how, if there’s only supposed to be ONE page released per month, why this blog says that THREE new pages have just been made available.  I wondered that, too, and I asked Trey.

The answer is that Daniel found his professional workload lighter than normal this past month and had more time to illustrate pages.  Initially, he delivered two pages to Trey, but a day later, he had a third one ready, as well.  As you’ll see below, that additional page wasn’t quite as complex as the other two.

Trey isn’t certain how many more pages will be released next month yet, but it’ll be at least one.  If it’s two, then the first chapter will be complete.

Just in case you missed the first page, I’ve included it (along with the cover) below.  The story’s getting really exciting! 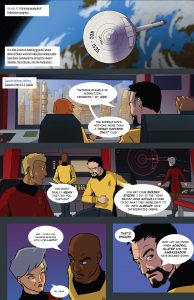 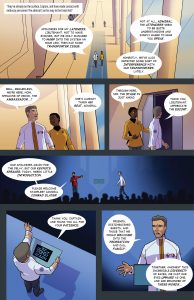 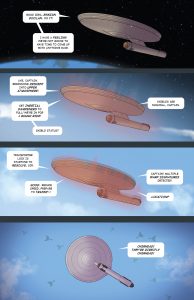