A whole new DIMENSION to INTERLUDE! 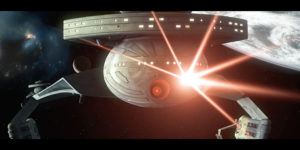 And this is why I’m not a video editor!

But before I begin publicly admitting my embarrassment, let me first say how excited and encouraged I am to see so much support for my Axanar Universe fan film INTERLUDE. After just 24 hours, we’d already made it an amazing 1/8 of the way to our $19,500 goal…with new donations popping up every few hours. So THANK YOU!

If you haven’t donated yet and would like to, here’s the link:

And there it was. I’m not an accomplished editor or VFX artist; I can’t compose music; I don’t know lighting; and I’m working my way upto”novice” when it comes to video cameras and the latest technology. Fortunately, I have some amazing people who DO know this stuff backwards and forwards, and I’m more than happy to find them some money to produce a film and then just get out of their way and let them work their magic.

However, when it came to creating the “ask” video for Interlude, I didn’t feel comfortable requesting or expecting too much free work just yet. Oh sure, LEWIS ANDERSON created the awesome CGI render of the opening VFX sequence, MARK EDWARD LEWIS added the sound effects, KEVIN CROXTON composed the music, and Mark did the sound mixing. Those 19 seconds were a true team effort.

But the other 12 minutes and 16 seconds of the ask video were all me, my Canon G3X camera, and my Mac. And as I said, I’m not exactly an accomplished expert, and I don’t have the high-end editing software (nor did I have time to learn it). So I just did my best to record footage and assemble the video using the “Happy Meal” of Mac film editing applications: iMovie.

Considering my limited experience and abilities, and also the short amount of time I had to complete everything, the 13-minute ask video and the 1-minute Interlude “commercial” came out fairly decently. Lots of people agreed…even a few detractors, if you can believe it. But those same detractors were all too eager to point out how disappointed they were that Interlude would have a standard HD aspect resolution of 16:9 instead of the wider screen cinemascope aspect ratio of 2:39.1 that Prelude to Axanar was shot in.

Then, two days after I’d launched the GoFundMe with the “ask” video that I was so proud of, my CGI guy messengered me to ask why I cropped his cinemascope VFX footage down to 16:9?

In my hurry to finish on time, I never even noticed that iMovie had automatically applied a “crop to fit” filter on the widescreen footage to fit the 16:9 aspect ratio of the rest of my ask video. Everything seemed to look just fine…or so I thought as I rushed to get everything done. So this oops is entirely on me, kids.

Needless to say, the mistake was easy enough to fix once I’d discovered my goof. So may I be the first to invite you to view the opening VFX sequence of Interlude in the aspect ratio that it was intended…

When Interlude enters post production in (hopefully) November, the editing will be done by my directors, JOSHUA IRWIN and VICTORIA FOX (with maybe some minor input from me). Now, they DO know what they’re doing, as you can see if you view their Avalon Universe fan films GHOST SHIP and AVALON LOST. So don’t worry about the final cut of Interlude…it will be in good hands (in other words, not mine!).

And if you want to check my homework and verify that I fixed the ask video, too, you can find it on the crowd-funding campaign page (where—did I mention?—you are also welcome to donate)…