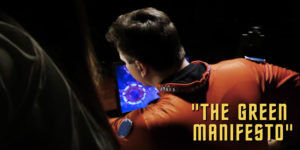 Okay, I’ve decided to coin a new term: “FANdemic Star Trek film.” Because let’s face it, the global COVID-19 crisis isn’t going away anytime soon, and we’re gonna need to wear masks and social distance at least until a safe vaccine is developed and disseminated (and people actually take it!).

But Star Trek fan filmmakers are a dedicated and tenacious bunch! And just because most of Hollywood has shut down doesn’t mean fan films have to. We simply need to do things a little more creatively and carefully. Already, we’ve seen several pandemic-produced fan film releases from all over the world. One of the first, HORREUR POST ATOMIQUE from France, told the story of three survivors of World War III living in bunkers, just before first contact with the Vulcans. Then LOOK FORWARD TO THE DAY showed a socially distancing Kirk, Spock, and McCoy having a futuristic Zoom call. Two weeks later, JENS DOMBEK, “The German Spock,” released a one-man (well, one-Vulcan) fan film called I AM SPOCK. And even VANCE MAJOR has released two CONSTAR CONTINUES films post-pandemic (and I’ll be featuring an audio interview with him soon).

So for lack of a better word, I’m going with “FANdemic” film. And the latest example of one was written only three and a half weeks ago, filmed shortly thereafter in Mountain Home, Arkansas, and released this past weekend from WARP 66 STUDIOS and WOLF/REYNOLDS PRODUCTIONS. It’s the seventh overall fan film from the fan series THE FEDERATION FILES (you can view all of their releases on this YouTube playlist). Because their anthology format covers the entire history of the Star Trek universe, stories have ranged from the 20th and 21st centuries to the 23rd and 24th centuries. 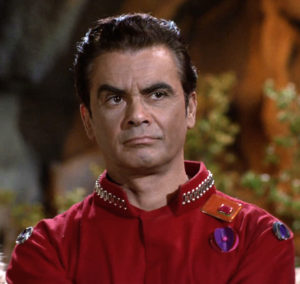 Their latest production is set solidly in the 21st century during the time of World War III and focusing on Colonel Green from the TOS episode “The Savage Curtain” (although in this fan film, Green is still a Major). His genocidal campaign in the 21st century resulted in the deaths of 37 million people. Green believed he was cleansing the gene pool—a hero in his own mind and to scores of followers…an evil homicidal monster to others and to the annals of future history.

But how did he kill so many people so quickly? This fan film seeks to shine a light on this dark question with a little help from today’s headlines. Producer and director of photography DAN REYNOLDS (who also appears in the film as the scientist who engineers a deadly virus) suggested to writer GLEN WOLFE the idea of creating a story about a pandemic. Glen then researched the character of Colonel Phillip Green.

“There was a lot of data on non-canon Colonel Green adventures,” Glen told me, “which I did not incorporate into this, as I try to follow canon as close as possible. Therefore, there is not much history. I did go with the dates of Star Trek‘s World War III, which Green was involved in, and then backdated his rank to be lesser than a colonel since World War III will happen six years from now, and it has been intimated that he is involved in bio chemical or biogenic warfare, which seem to fit with a pandemic.”

Speaking of pandemics, I was curious to know what precautions Dan and Glen put in place to keep this production as safe for the actors and crew as possible.

Glen explained, “Minimal crew, face masks and sanitizer were available. As I work in the medical field, I did present the appropriate questions to everybody when they got there. And furthermore, we only had people in this shoot who were already either related or socially close to everybody else in the group so there was no outside contact with people we were not closely familiar with.”

Amusingly, I assumed—mistakenly—that two of the people working on the film, DAN REYNOLDS and his wife KELLY REYNOLDS (who directed the film) were related to two of the actors in the film, JOSHIAH and MICHELE REYNOLDS. Turns out that, even though both couples are married, the two couples are not related to each other. However, Glen did confirm that, “[T]he rest of the crew were either my relations or very close friends of Michelle Reynolds.”

Dan Reynolds added, “This film was shot in our large Mountain Home studio, and we all kept an acceptable distance when not needed. Also, we did our own verbal contact tracing, asking if anyone has been in contact with anyone sick or verified with the Coronavirus. We actually had several scenes scheduled to shoot for ‘Doppelgänger,’ as well, but one of our principle actors announced his mother tested positive for the virus. So we postponed that shoot because he still lives at home. He has since tested negative, but because the “Doppelgänger” cast is larger and pulls actors from various regions, we have decided to be extra careful when we decide to resume a shooting schedule.”

And there you have it—fans filming during the FANdemic. Now let’s take a look at what they made…