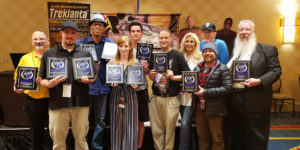 Who says Star Trek fan films are dead? Certainly not I! And certainly not the 2019 BJO AWARD winners, which included a number of first-time Star Trekfan filmmakers and their projects…along with winners who are veterans in the community.

The annual Bjo Awards show takes place each each at the TREKLANTA convention in Atlanta, which celebrates Star Trek in general and Star Trekfan films specifically. A total of 28 new Trek fan films, all released during calendar year 2018, qualified for consideration by the panel of judges (view the entire list here).

The finalists were announced last week in 11 different categories. And interestingly enough, over half of the winners (six) were for fan films produced in Northwest Arkansas! Specifically, the fan film GHOST SHIP from Arkansas writer/director JOSHUA IRWIN took four Bjo Awards, and the fan film ADVENTURES OF THE USS PARKVIEW: “THE BUNNY INCIDENT” from Arkansas writer/director/composer KEVIN CROXTON took two Bjos.

Another three awards were claimed by the wonder from Down Under, Australian fan filmmaker AARON VANDERKELY and his team for their NX-era fan films GOOD MEN and THE FALL OF STARBASE ONE.

Of the other two awards, one went to MATTHEW BLACKBURN of California for the final installment of the “Survivor Trilogy,” LAST SURVIVOR, and the other to SHELTON E. WALKER for a guest actor appearance as Commodore Alwine in the two-part STARSHIP ENDEAVOUR: “THE MONOLITH, PART ONE” and “THE MONOLITH, PART TWO” from Potemkin Pictures in Alabama.

And now, let’s find out who won what…!

The Adventures of the USS Parkview – “The Bunny Incident”
Kevin Croxton

Good Men and The Fall of Starbase One
Gina Vanderkley

Daniel Buckle as Ambassador Sultek
The Fall of Starbase One

Aaron Vanderkley
The Fall of Starbase One

Kevin Croxton
The Adventures of the USS Parkview – “The Bunny Incident”